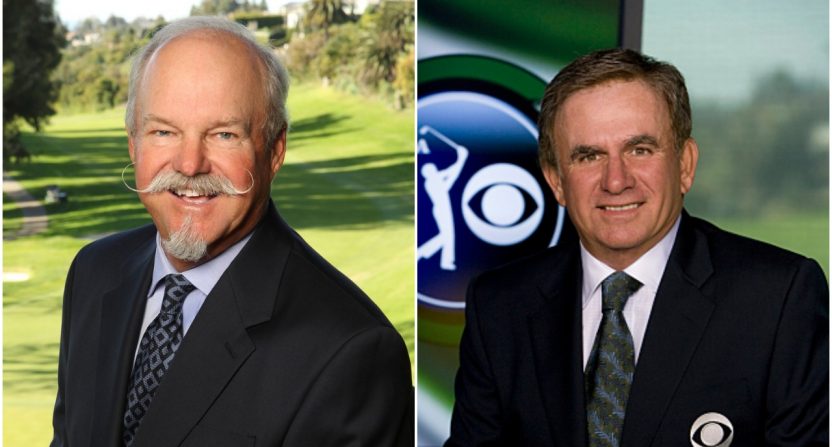 When CBS resumes their golf coverage in 2020, they’ll be doing it without two of their longest-tenured analysts. CBS reportedly chose not to renew the expiring contracts of both Gary McCord and Peter Kostis, who have been with the network since 1986 and 1992, respectively.

Geoff Shackelford had the news at Golfweek:

Gary McCord and Peter Kostis, two stalwarts of the CBS golf broadcast team, will not return in 2020. Both faced expiring contracts that will not be renewed.

A CBS spokesman confirmed the news to Golfweek on Saturday and released a statement. “Gary and Peter have been an important part of our golf coverage for three decades. They were both outstanding teammates and we thank them for their significant contributions throughout the years. We wish them both all the best.”

John Ourand had a post on Facebook further confirming the news, and included Peter Kostis’s statement on the situation:

Kostis said, “As I look to my future, it will most definitely include going back to my teaching roots, completely unfiltered, in some form or fashion (maybe a book) and I’m really excited about that! As well, there are numerous new opportunities for covering golf that are very interesting.”

Kostis also emailed statement, which reads in full:
“It is hard to believe that it has been thirty years since the first time I walked a golf course with a microphone — at the 1989 Ryder Cup at The Belfry for USA Network. Things have certainly changed quite a bit, since USA only broadcasted the event – and gave me my first break – because NBC, CBS and ABC chose not to pay any rights fees to broadcast the Ryder Cup. It was an electric environment and from that moment, my life would never be the same. There were 15 years as the 18th hole analyst for USA and 29 years as a golf announcer for CBS — offering me a front row seat for some of the greatest moments in golf. I have been thinking quite a bit about requesting a reduced travel schedule, but CBS made my decision easier when they elected to not exercise the two-year option on my contract.

Finally, I have to say a big thank you to all the announcers I’ve worked with over the years. I believe that the CBS golf announce team is the gold standard. A special shout out to Gary McCord who has been with me every step of the way, (including that infamous 1989 Ryder Cup broadcast team!) and Jim Nantz who has been there for my entire CBS career. To the cameramen, technicians and support staff at CBS I simply say it was a privilege to work alongside you. Bye for now! I’m off to UPS to send some packages!”

(The last line is a fun little dig at FedEx’s omnipresence on PGA Tour coverage across all networks.) It is truly tough to imagine CBS golf coverage without both McCord and Kostis. The move coming now is also interesting; clearly both men expected to be back, as there was no on-air goodbye in the fall. CBS is also in the midst of bidding for the next round of PGA Tour rights.

CBS has their current rights through 2021, so it’s unlikely this move is the result of a vote of no confidence in their own bid. It could be a move signaling a revamp of their coverage, or at least a willingness to evolve; maybe that’s something the PGA Tour is looking for in the next round.

These would not be the first two changes most people would choose to make to CBS coverage, but regardless, golf on CBS is going to sound a lot different going forward.