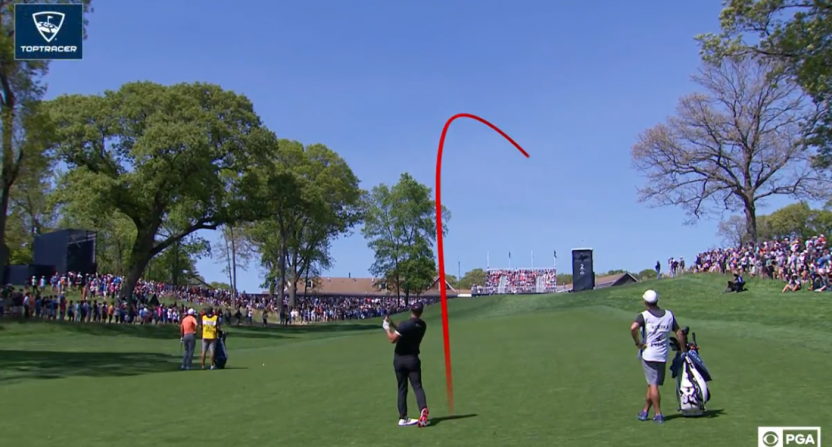 Brooks Koepka looks like he’s going to win his fourth major going back to the 2017 U.S. Open, as he’s opened an eight-shot lead in his effort to win back-t0-back PGA Championships. It’s been a world-class performance so far from Koepka, which is more than can be said for CBS’s TopTracer tracking feature.

Shot tracking has been a big win for golf broadcasts, helping viewers see the trajectory of shots in ways they couldn’t have before. Viewers watching Koepka’s approach shot on the second hole probably thought for a second that Koepka had hit a bad shank, which would have been pretty shocking given Koepka’s machine-like consistency. But that wasn’t quite the case:

Watching it, you can see the line pick up Koepka’s (very impressive) divot instead, which threw off the tracking completely.

TopTracer got the divot instead pic.twitter.com/2aGuLOfIM5

Tracking is obviously not perfect, of course, but CBS hasn’t earned themselves much benefit of the doubt with golf viewers over the years. Today’s broadcast also featured a new Aerial Tracing feature, and it has not been well-received. Here’s the first use, on Justin Rose’s opening tee shot:

For the first time ever on a golf broadcast, Aerial Tracing gives you an overhead look at the shot’s flight pattern. pic.twitter.com/V0vKckldSW

A sampling of the replies:

Taking us further away from the player during the shot is being broadcast is pretty much the opposite of what you should be doing, but I'm not surprised. Just watch FOX's broadcast of the US Open and copy whatever they do because apparently you guys will never understand.

I want to see the live golf shot, the player’s swing and reaction, not an overhead graphic/video game display of where the ball is going

“Your scientists were so preoccupied with whether or not they could, they didn’t stop to think if they should.” – Jeff Goldblum, Jurassic Park

Ben’s point is a good one; here’s Koepka’s opening tee shot, which the tracking technology did indeed think would end up in the trees down the right:

It struggled again later, suggesting a Jordan Spieth drive would end up in a bunker, only for it to find the fairway:

Here's the blimp tracer putting Spieth in the bunker. (He ended up in the fairway.) https://t.co/nmMzVREiyC

The idea behind the blimp tracking is a sound one; give viewers a better idea of the course and the shot shape required. But the execution (minimizing the swing windows, questionable results in the end) has been a poor one so far, and it’s pretty hard to see how it’s a step up over the now fairly standard side-by-side tracking shots often employed, with a virtual representation of the hole and the subsequent tracer line in a vertical box on the right and a nearly full-screen view of the player on the left.

"What if we took the Protracer thing, the one thing that everyone loves, threw it way up in the sky, and made it significantly and unnecessarily worse."

"There it is. Call it blimp tracer or something."

The vitriol is something of a tradition for CBS broadcasts, which consistently frustrate in terms of presentation. Here’s how the broadcast opened today, for example:

That’s the reason why people get so mad when something like the blimp tracking feature goes awry, or laugh so hard when a giant divot interrupts a routine shot tracer. The blimp tracking issues are even understandable; the tracking might indeed be estimating where balls are going to land, but it can’t take into account the rollout that pros are playing for. But there’s no built-in goodwill for CBS, and the snafus combined with what looks like another runaway win for Koepka is a recipe for plenty of coverage-related criticism.