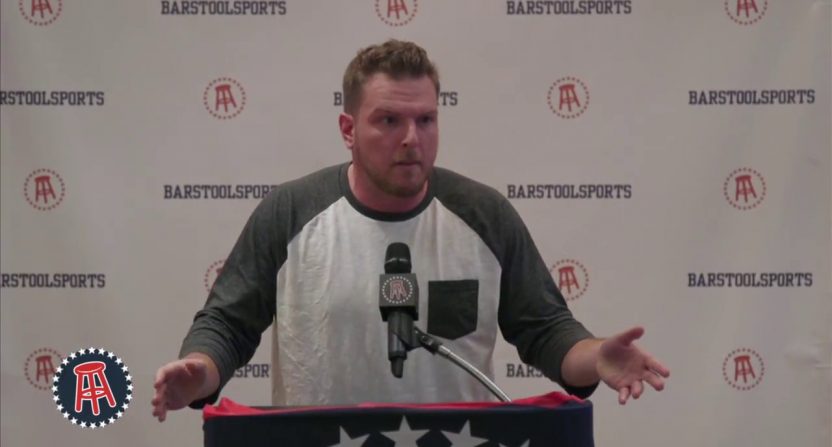 As a punter for the Indianapolis Colts, Pat McAfee said in early 2017 he planned on taking over “the bum ass media that’s in sports right now.”

Media plays a gigantic role in our sport.. There's just too many dumbass fanboys/girls in the profession right now.. not all, but A LOT https://t.co/7VFBipE9b7

He put his money where his mouth was a few weeks later when he announced his retirement from the NFL and immediately joined Barstool Sports, which, technically speaking, is a part of the media. At the time, he said that his profession was taking a toll on his body and when Barstool approached him about joining up with them whenever his athletic career ended, things moved quickly.

“I told them I might be done sooner than most people think. Conversations kind of cooked up. I told them I wanted to stay in Indianapolis and they said, ‘Sounds good, we’ll give you headquarters out there.’ It was really the perfect fit at the perfect time.”

From there, McAfee became a mainstay across the ever-growing Barstool empire, from podcasts to videos to blog posts.

In January 2018, McAfee became a part of Barstool Radio on Power 85, a SiriusXM channel where the company could do “whatever the fuck we want,” per Barstool founder Dave Portnoy. The Pat McAfee Show would run between 10 a.m. and noon each weekday.

Sadly, nothing gold can stay and McAfee took to Twitter on Friday to announce that he’s leaving Barstool Sports. His announcement, while mostly positive about his experience with the company alludes to financial decisions happening without his knowledge that affected him and it became a situation he no longer wanted to be a part of.

My time at @barstoolsports will be one I reflect upon fondly. Sometimes adult stuff gets in the way. I’m officially a free agent. pic.twitter.com/ON5KwnFzjc

“I began being disrespected by the business people in the building. I’ve decided I don’t want to make money for these folks anymore. I’m very proud of the work I did with Barstool.”

“Financial decisions were being made for me by people I had never met, deals were getting made and pulled without my knowledge,” said McAfee. “The transparency of everything became obsolete, and also very expensive. I do not place any blame or hold any grudge towards Erika [Nardini] and Dave [Portnoy] for this. They’ve been nothing but nice and fair to me. They paid me very well. This is below them. I began being disrespected by the business people in the building. I don’t want to make money for these folks anymore.”

Portnoy responded to McAfee’s tweet noting that while he “rightfully lost some trust in our business folks,” he and Nardini took responsibility for whatever happened.

I love + respect Pat. I begged him to stay, but he’s got to do what he thinks is right for him. He’s a complex dude and he rightfully lost some trust in some of our business folks. Ultimately that’s my and Erika’s fault. It sucks to lose such a talented dude. Wish him the best https://t.co/nLCh1626oH

Sales and accounting. I’ll discuss when I’m not on a plane. But I certainly wouldn’t say it was intentional. It was a combo of multiple factors and I see multiple point of views. It’s like when a star feels like management doesn’t respect their contributions.That’s what happened https://t.co/9HGZqGaQbA

Nardini echoed that sentiment in her response as well.

Pat is an exceptional person and talent. Being part of his transition from a NFLer to a mega-star was a real privilege. I wish this were different and there are things we have to do better here. That’s on me. I hope our paths cross again. https://t.co/UoxJ8kGgnA

McAfee will be a hot free agent in the sports media world. His outsp0ken reputation precedes him and there will likely be plenty of suitors who will want to see if they can get some of his Barstool listeners to follow him wherever he ends up.

As for Barstool, the soap opera never ends.