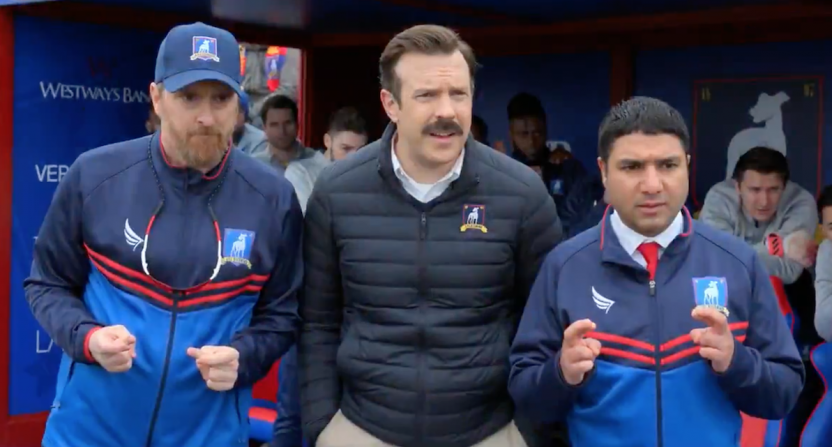 We needed Ted Lasso in 2020. It was the right television show at the right time.

Released in the worst year of our lives, Ted Lasso gave us something to feel good about. In the middle of a pandemic, this gem separated itself from an ocean of content to become a pop culture phenomenon.

If someone told you in 2019 that a story based on a commercial about an American college football coach from Kansas becoming a soccer coach in the United Kingdom would earn 20 Emmy nominations, you would have snorted in disbelief.

And if someone told you that it was on Apple TV+ (not Netflix; not HBO Max; not Amazon Prime Video; not Disney+), you would have howled even louder. I dare you to name another original program on Apple TV+. Most of us are scrambling right now to make certain our subscription hasn’t expired so we can watch Season 2 of Ted Lasso when it debuts next week.

The anticipation is so great. Can it possibly live up to expectations?

Previous successful sports comedies featured anti-heroes like Jim Brockmire of Brockmire and Kenny Powers of Eastbound & Down. No subtlety there. They were raunchy, obnoxious, outlandish. We loved them because of their flaws. That’s what made them so damn unique and appealing.

Ted Lasso, starring Jason Sudeikis, took the opposite approach. It showed us the strength of being kind. Not in a syrupy way. But genuine compassion for your fellow man. That was immediately refreshing in a COVID-19 world under a presidential administration short on empathy. Pure escapist joy that brought us into a better world. Ted Lasso was so beloved that it didn’t matter if you knew nothing about fútbol.

Soccer fans loved the attention to detail and the inside jokes about familiar athlete archetypes (Like Roy Kent, the aging superstar who’s way past his prime, and Jamie Tartt, the young, self-centered hotshot). Non-soccer fans got wrapped up in the fish-out-water narrative about a foreigner trying to win over his boss, his team, and fans.

The 10-episode show debuted in August, running through October. Word-of-mouth quickly spread. And remember, this wasn’t on a popular streaming service. Apple TV+ has only 33.6 million subscribers. In comparison, Netflix has 207.6, Amazon Prime Video 200, and Disney+ 100. Still, Ted Lasso was one of biggest breakthroughs of the year.

It invaded our culture with several web sleuths and articles devoted to trying to solve the mystery recipe of Ted Lasso’s biscuits. There’s a Twitter handle (@dancinglasso) featuring Ted Lasso dancing to different songs (featuring Sudeikis moves originally seen on Saturday Night Live’s “What Up with That?” sketch). You can even purchase official merch. Treat yourself by getting an AFC Richmond jersey.

We’ll never know if Ted Lasso would have received the same universal praise if not for the awfulness of 2020. What we do know: the show would not have been successful without Sudeikis. Getting that character exactly right was impressive. If Sudeikis was a note off or struck the wrong tone, Ted Lasso could have easily turned out horribly wrong. A lessor actor might have interpreted Lasso’s cheerful demeanor as cartoonish.

If you don’t buy the sincerity, the show doesn’t work. Full stop. Ted Lasso would have been canceled. Mocked forever in memes instead of celebrated.

Credit Sudeikis, who won a Screen Actors Guild Award and a Golden Globe (and is the Emmy favorite.). Also, credit writers Bill Lawrence, Joe Kelly, and Brendan Hunt. The 20 Emmy nominations are the most for a freshman comedy series in TV history.

We trust Ted Lasso the way an older generation trusted the sitcom dad. He earned it. We watched the way he slowly changed the minds of skeptics. All while going through his own personal crisis of divorce.

Season 1 of Ted Lasso was perfect. Season 2 has a lot to live up to. Is a sophomore slump inevitable? The world is different now as we move closer to a post-pandemic society.

We’re traveling, going to concerts, visiting friends, living our lives. We have ways to feel good that don’t involve immersing ourselves in a TV show. Still, a lot of people are eager to see the continuing adventures of Ted Lasso.

Will AFC Richmond make it back after being relegated? Will Lasso have a new love interest? And what about the love triangle involving Kent, Tartt, and Keeley Jones?

“I think if you care about someone and you got a little love in your heart, there ain’t nothin you can’t get through together.”