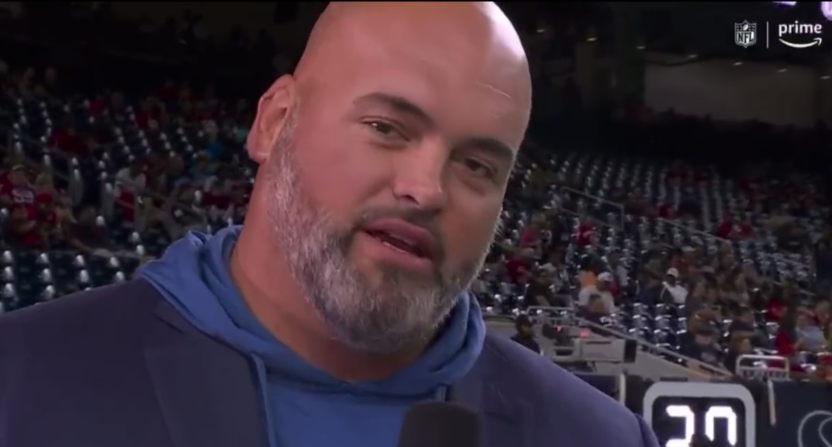 A vague “It’s been a busy day of answering calls” line from Amazon NFL analyst Andrew Whitworth on air, when asked if the leg injury to Dallas Cowboys‘ tackle Tyron Smith had his phone ringing, has now led to a Twitter exchange between Whitworth and Mike Florio of Pro Football Talk. This stemmed from comments Whitworth made on the subject to sideline reporter Kaylee Hartung on Amazon’s Thursday Night Football debut preseason broadcast of the San Francisco 49ers–Houston Texans game Thursday, which were interpreted by the Blogging The Boys (the SB Nation Cowboys site) Twitter account as confirming the Cowboys reached out to him:

Andrew Whitworth just said on TNF that the Dallas Cowboys called him.

Here’s a full transcription of that Hartung-Whitworth exchange, via Matt Clapp of The Comeback:

Hartung: “After last week’s game against the Texans, has your phone been ringing?”

Whitworth: “It has. I mean, obviously, there’s been some things with the Cowboys and losing Tyron Smith. It’s just an awful deal. Such a great player, and a guy I’ve always loved watching play. It’s been a busy day of answering calls. The problem is they’re calling and texting the wrong person. They need to be texting and calling Melissa Whitworth and the kids, because they have final approval on whether I’m ever going to play football again.”

That wasn’t the only discussion of this. On the Amazon pre-game show, Michael Smith wrapped up a discussion of Tyron Smith’s injury with a throw back to Charissa Thompson at the desk involving Whitworth, and Thompson then asked Whitworth about it. Mike Florio of Pro Football Talk has that transcription:

As Michael Smith finished an assessment of the impact of the Tyron Smith injury, he threw it back to the desk saying this: “But on behalf of everybody here at Prime Video, Jerry Jones, if you’re listening, don’t even think about calling our man Andrew Whitworth. He’s off limits.”

Charissa Thompson then asked Whitworth, “How many texts have you gotten today?”

“There’s a Melissa Whitworth number,” Whitworth said. “And that’s the problem they have.”

From those comments, especially the “It’s been a busy day of answering calls,” the “My phone has been busy,” and the “They’re calling and texting the wrong person,” and from those comments coming in just sentences after discussion of the Smith injury, many assumed (like the initial tweet here) that the Cowboys had expressed interest in the 40-year-old Whitworth, but that he had shot it down. That would be a problem if they’d done so, though, as Whitworth (who announced his retirement in March after winning Super Bowl LVI with the Los Angeles Rams) remains on the Rams’ reserve/retired list, meaning the Cowboys would need the Rams’ permission to contact him without facing potential tampering charges.

One of the many sites that wrote up Whitworth’s comments with the interpretation that it was the Cowboys calling and texting him was Pro Football Talk, which did that Thursday night with a piece from Charean Williams. That piece went no further than most pieces covering this, but Whitworth took particular exception to it Thursday night, saying those calls were from people “begging” him to go to the Cowboys, not team representatives:

Not what I said. I said I answered calls and text from people all day since the injury. Begging me to go to the cowboys! Thx https://t.co/aoyA5DEvuE

On Friday, Florio (PFT’s founder, owner, and editor-in-chief) wrote a new piece on this (linked above, but also here) titled “Andrew Whitworth backs away from comments strongly suggesting that the Cowboys have called him,” going through Whitworth’s comments on the broadcast and subsequent comments on Twitter and discussing the tampering angle. Whitworth took exception to that, and that led to a Twitter back-and-forth:

In repeated attempts to make assumptions without asking people directly! @ProFootballTalk has got another story wrong and failed to take any responsibility! Have a great Friday folks! ??! https://t.co/DXyPSNOkJH

Andrew, you said what you said. You created the impression that the Cowboys called. If you're going to work in TV, you need to own your words and not blame others for hearing your words and reacting to them. Have a great Friday folks! https://t.co/VjeUNbHbQC

I answered many messages yesterday from national and a few dallas sports reporters and journalist.
☝? The “people” I mentioned last night. Asking me if cowboys had reached out? Or if I was interested?
Answer was “No” 2 both! Appreciate them for doing it the right way!
✌?!

Florio has a point here. It was quite a reasonable conclusion from the specific comments Whitworth made that the calls he was receiving were from the Cowboys. And the “without asking people directly” line Whitworth drops is a bit unfair, especially as these comments and this first story happened while Whitworth was on air, and the first story was a direct writeup of what he said (similar to ones many other sites did).

The argument Whitworth can make is that he did not specifically say Cowboys’ figures had called him. And some sites perhaps went too far with specifically saying his comments meant that he’d received calls from the Cowboys. But there’s also a middle ground of Cowboys’ figures checking with Whitworth on interest via a couple of layers of remove to potentially avoid a tampering charge; that would still be team interest, but not calls from the team. (The lesson on this side may be that everyone should be very careful in writing about “calls” from a team, especially with the NFL seemingly interested in tampering crackdowns these days.)

Even if the intermediary check-ins theorized above didn’t happen and Whitworth’s “calls” were completely inquiries from journalists and fans with no connection to the team front office, presuming the audience would understand that based on his comments was quite an assumption. And that’s not a great assumption for someone who’s now working in the media. If Whitworth was as badly misinterpreted as he claims, that’s unfortunate, and perhaps sites should be more careful with the specific language they use to relay retired players’ comments on team outreach. But if retired players want to avoid this, they also need to be clearer than Whitworth was here.