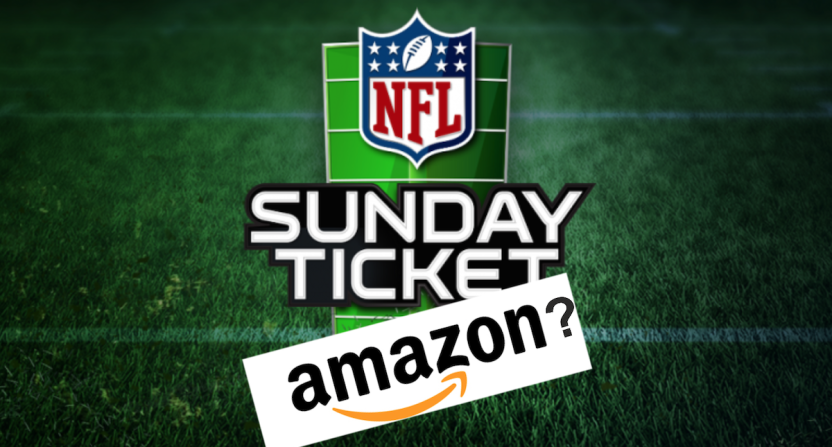 With the NFL finalizing its TV rights agreements with CBS, ESPN, Fox, NBC, and Amazon, the only unresolved issue is where the league’s Sunday Ticket package will land.

All signs point to the NFL choosing a digital partner for its package of live out-of-market game broadcasts, either breaking away from DirecTV or offering a split package for consumers that could still allow games to be shown in bars and restaurants, which is probably where Sunday Ticket is most popular.

In recent months, speculation has zeroed in on Disney’s ESPN+ streaming platform and Apple as possible destinations. But Apple has never carried live sports before, which makes that a risky proposition. ESPN+ would appear to be a natural fit, considering its sports content and the cable network already having a relationship with the NFL for its Monday Night Football broadcast and studio programming throughout the week.

Yet according to Front Office Sports’ A.J. Perez, Amazon is emerging as the front-runner to win the Sunday Ticket rights. That follows up on a similar sentiment CNBC reported in early September. Amazon also currently has an established relationship with the NFL, taking over the league’s Thursday Night Football telecast beginning next season with an 11-year deal worth $1.2 billion per year.

Perez’s report says that Amazon’s partnership could extend beyond the Sunday Ticket package in such a deal, with the streaming outlet and online merchant also acquiring stakes in NFL Network, NFL RedZone, and NFL.com. Those minority stakes could be as high as 49 percent.

The NFL also makes business sense for Amazon beyond streaming games. NFL Network programming and NFL Films content could also be added to the Prime Video catalog or offered for digital rental and sale. A larger offering of licensed NFL apparel is also something Amazon could offer to its retail customers.

If Amazon is indeed currently leading the race for Sunday Ticket rights, its front-runner status is precarious. A potential deal incorporates many moving parts that need to be considered. Additionally, those companies also pursuing the package haven’t given up the fight. Perez mentions Paramount Plus (part of ViacomCBS, which has a TV rights relationship with the league and includes Inside the NFL in its catalog) as a suitor along with Disney and Apple.

The report follows speculation from the New York Post’s Andrew Marchand that Discovery/WarnerMedia could also enter the Sunday Ticket bidding and put the out-of-market telecasts on HBO Max. WarnerMedia has already shown that it’s looking to add a big sports package to its streaming offerings, teaming up with Fox to put in a major bid for Premier League rights.

Two sources: Warner/Fox came in with higher bid for EPL than NBC. #EPL

According to author James Andrew Miller — whose latest book is about HBO, a WarnerMedia company — that bid was larger than the one NBC submitted to win. Even by outbidding the competition, however, WarnerMedia and Fox faced an issue of where the Premier League games would have been shown.

But if Warner takes on Sunday Ticket alone, HBO Max provides the streaming platform for that NFL package. And as Marchand points out, if the conglomerate wants to be in the NFL business, Sunday Ticket presents the only opportunity currently available.

The possibility also remains that the NFL could divide the package up, though it seems unlikely that any of the suitors would want that. And DirecTV could still be in play to keep Sunday Ticket on satellite TV. (Would that include as a streaming product as well, which has been the case for the past two NFL seasons?) Regardless of the outcome, the days of Sunday Ticket being an exclusive package could be over.