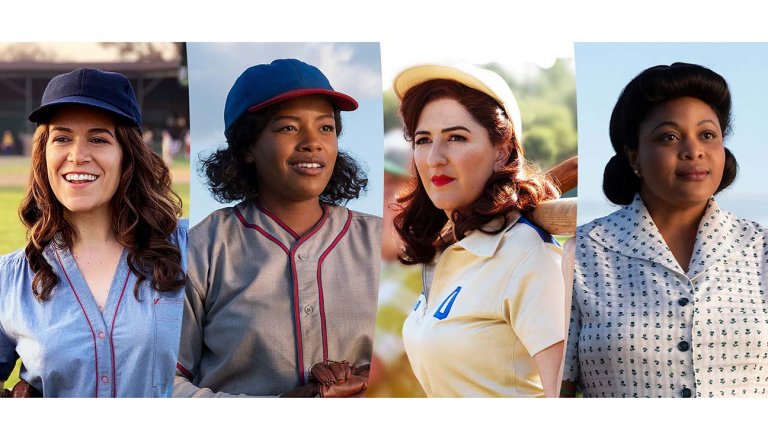 A League of Their Own is again being turned into a TV (or, in this case, streaming) series. The famed 1992 movie spawned a short-lived CBS sitcom of the same title in 1993, which produced six episodes, but only saw five actually air (and with two of those coming months after the series’ debut). Now, a new A League of Their Own series from Abbi Jacobson, Will Graham, and Sony Pictures Television Studios, which has been in the works at Amazon since March 2018, has been ordered to series following an earlier pilot. The series will star Jacobson, Chanté Adams, D’Arcy Carden, Gbemisola Ikumelo (seen left to right above) and more. Here’s more on the new series from Lesley Goldberg at The Hollywood Reporter:

Broad City’s Abbi Jacobson and Will Graham created the hourlong series, which is described as a reinterpretation of the original nearly 30-year-old feature film about the All-American Girls Professional Baseball League. The Amazon take, which stars Jacobson, will have the spirit of Penny Marshall’s beloved movie while expanding its lends to explore race and sexuality as the series follows a new ensemble of women carving out their own paths in the league and outside of it.

“Twenty-eight years ago, Penny Marshall told us a story about women playing professional baseball that up until then had been largely overlooked. We grew up obsessed with the film, like everyone else. Three years ago, we approached Sony with the idea of telling a new, still overlooked set of those stories. With the help of an enormously talented team of collaborators, an amazing cast, and the devoted support of Amazon to this project, we feel beyond lucky and excited to get to bring these characters to life,” Graham and Jacobson said in a joint statement Thursday. “It took grit, fire, authenticity, wild imagination and a crackling sense of humor for these players to achieve their dreams. We’re hoping to bring audiences a story with all of those qualities.”

Jacobson, Chanté Adams, D’Arcy Carden, Gbemisola Ikumelo, Kelly McCormack, Roberta Colindrez, and Priscilla Delgado star in the series, which features recurring guest stars Molly Ephraim, Kate Berlant and Melanie Field. Jamie Babbit directed the pilot. Sources say that some surviving members of the AAGPBL served as consultants on the pilot and are expected to continue on with the series.

It’s interesting that this is now an series focused on hour-long installments, as Amazon’s summary of it back in 2018 had it listed as “a half-hour comedy infusing the warmth, humor and DNA of the classic film, while taking a contemporary spin on the stories of the women surrounding the All-American Girls Professional Baseball League.” Perhaps the hour-long approach (which is usually used for dramas rather than comedies, which are more typically half an hour, although there are some exceptions both ways) fit better with the particular stories this series wants to tell, including explorations of race and sexuality.

This comes as part of Graham’s overall deal with Amazon, which started with the Mozart in the Jungle series and also includes the forthcoming Daisy Jones & The Six. Graham has some sports experience as well;  while many of his early directing credits come from The Onion News Network series, he also directed ten episodes of Onion SportsDome back in 2011. Meanwhile, Jacobson will star as well as serving as a creator and executive producer. We’ll see how this one turns out, and how it lives up to the film.