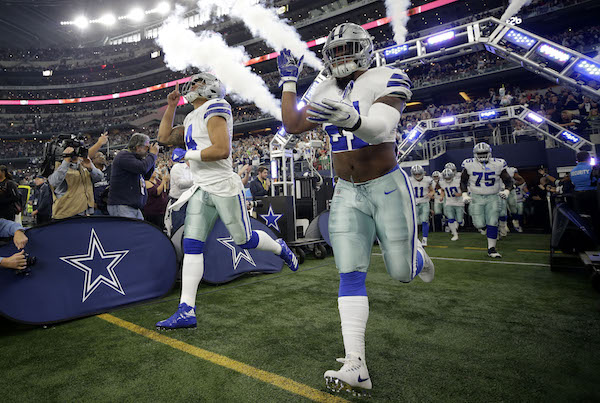 The 2017 season was not one to remember for the Dallas Cowboys. Unfortunately for them (but fortunately for football fans), NFL Films documented all of it and created a TV series out of everything that went down for the Cowboys last year.

The latest season of the Amazon sports documentary series, All or Nothing, follows Dallas on and off the field through every game they played last season. How they dealt with everything from the national anthem protests, to Ezekiel Elliott’s suspension, to not making the playoffs (spoiler alert, sorry) is shown over eight, 50-minute episodes.

Aside from the more obvious events that went on during the Cowboys’ 2017 season, what were some of the unknown happenings that NFL Films was able to uncover in this most recent version of All or Nothing?

10. The Cowboys still have no idea that the Chargers moved to Los Angeles

Both Dallas head coach Jason Garrett and former wide receivers coach Derek Dooley referred to the Chargers as “San Diego” when mentioning the team in meetings with their players. Maybe the reason why no one went to Chargers games in Los Angeles last season is because people like Garrett and Dooley still don’t know they moved?

9. Alfred Morris buys his own cleats and drives a ’91 Mazda

One of the perks of being in the NFL is gaining access to all of the free apparel and the ability to afford nice things with a three- or four-figure salary. This doesn’t seem to matter for Cowboys running back Alfred Morris, though.

Since Dallas didn’t have any black cleat options he liked, Morris went to Dick’s Sporting Goods and bought himself a pair with his own money in 2017.

In addition to using his own cash to buy football equipment, the running back also drives a Bentley. Oh, I’m sorry — it’s actually a 1991 Mazda 626 that he nicknamed “Bentley.” He had to manually push that car out of his garage during one episode because it wouldn’t start.

For a guy who was only in his second career NFL season, Prescott’s demeanor in the huddle sure seemed like he’s been playing in the league for 10-plus years. Throughout a number of episodes, the 24-year-old quarterback was seen constantly motivating his teammates in the huddle and on the sidelines, reassuring them to not give up hope whenever the team was trailing.

As simple as this sounds, it has a lot to do with why Prescott has already been so successful during his time with the Cowboys despite just joining the team in 2016.

Well, Marinelli doesn’t just show any film to his players to prepare them for each week. The Dallas defensive coordinator has a little fun with it by using hilarious clips that relate to his message. These clips would also probably be found on an episode of Jackass.

It’s refreshing to see coaches who can still remind players that what they do for a living is pretty damn fun.

6. It’s not hard to realize why Dez Bryant was recently released

Bryant’s decline in play during the past few seasons has been pretty obvious and All or Nothing found a way to magnify it even more.

The (now-former) Cowboys receiver can be an intimidating person at times and this was easier for the team to deal with in the past when Bryant was finishing with double-digit touchdown catches each season. But his brashness became a little too much to ignore when he failed to back it up with big-time plays in 2017.

The veteran receiver dropped a number of important passes last year and NFL Films replaying these drops in super-slow motion made them seem that much worse.

After his career as a professional football player is over, it wouldn’t be that surprising to see Lee as a part of an NFL coaching staff. During multiple episodes of All or Nothing, the linebacker was shown leading the defensive meetings and film sessions during the week, just as a coach would do.

One of the final clips of the season’s last episode showed Lee alone in a meeting room, watching game film of Dallas’ final game of the season against the Philadelphia Eagles. No word on if he has ever left that meeting room yet and returned to be with his family.

4. Jerry Jones’ grandson sure can chuck a pigskin real good

One part of this year’s show dove into the world of Texas high school football and its massive popularity, especially among the family that runs the Dallas Cowboys.

During one episode, Jerry Jones’ grandson, John Stephen Jones, was shown leading his high school team to the Texas State Championship inside the Cowboys’ home stadium. You would have thought Dallas just won the Super Bowl the way the Jones family reacted to the result.

Jerry’s grandson is actually a pretty good quarterback too. He was recruited by a number of Division I college football schools and ended up signing a letter of intent to play at the University of Arkansas (his father’s alma mater) back in February.

During the first episode of this season’s All or Nothing, the 2016 NFL Draft is showcased since it was when the Cowboys added both Dak Prescott and running back Ezekiel Elliott to their roster.

However, the footage from the Dallas war room actually showed that the team wanted to draft Memphis quarterback Paxton Lynch in the first round before they even thought about selecting Prescott. The Cowboys were unable to land Lynch, but it’s safe to say that they’re probably happy with what ended up happening in the end.

Elliott dealt with a ton in 2017 and its effect on him was made pretty clear in All or Nothing. During the early part of Dallas’ season, the running back seemed disinterested in everything going on around him, leading to some poor stints out on the field.

To be fair, Elliott was having to fly back and forth between various courts and the Cowboys’ practice facilities to fight his six-game suspension for the majority of the season. It was clearly both physically and mentally exhausting for the young running back.

When Elliott returned from his eventual suspension for the Cowboys’ final two games in 2017, his demeanor was totally different. The running back was all smiles and much more engaged in the meeting rooms.

This should make Dallas fans wonder if their team would’ve actually made the playoffs last year if Elliott just missed the season’s first six games instead of fighting the suspension all year long.

1. Jason Garrett really needs to quit it with the clapping

We get it; your team made a good play. Please just figure out a different way to celebrate other than clapping 93 times a game.

Yes, there were times during All or Nothing when Garrett tossed in an occasional fist pump. But there must have been 147 clips of the Dallas head coach clapping during the show’s eight episodes.

Does he do this at home too? What if Garrett has those clapper lights? His house would constantly look like a rave was taking place.

Thanks to All or Nothing, I will always loathe any game I watch in the future that features a team with Garrett as its head coach. Mostly because he’s just really taken the joy out of clapping for me.