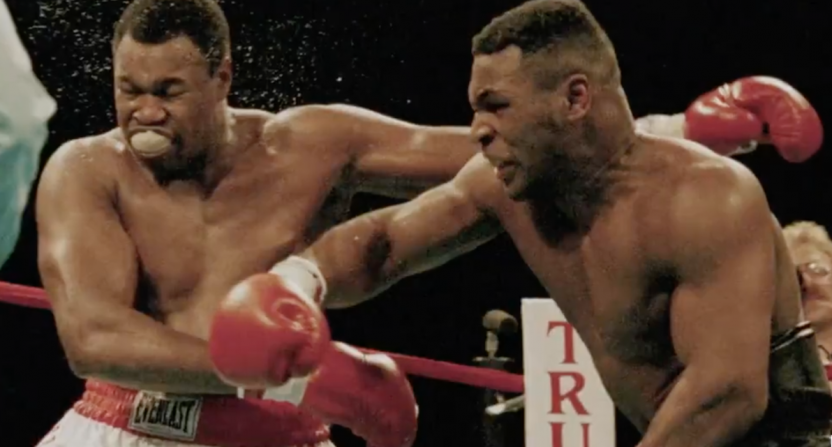 ABC News is stepping into the crowded sports documentary ring with a two-part, four-hour film on Mike Tyson. Part 1 of Mike Tyson: The Knockout premieres Tuesday, May 25 at 8 p.m. ET with Part 2 airing the following Tuesday. Each installment will also be available for streaming on Hulu the next day.

Ads for the docuseries have been running on ABC, but the network provided a better look at The Knockout on Monday’s Good Morning America.

The first part of the documentary will cover Tyson’s career and life from his early days growing up in Brooklyn, eventually taken in by boxing trainer Cus D’Amato, to his debut as a professional fighter when he was 18 years old. In 1986, Tyson defeated Trevor Berbick to win the WBC heavyweight championship. He was only 20 years old.

Though the sneak peek doesn’t say so, focusing instead on Tyson’s infamous 1997 fight with Evander Holyfield, Part 2 of The Knockout will chronicle Tyson’s very public fall from glory, losing the heavyweight title, being convicted of rape in 1992, and serving three years in prison. Naturally, the film follows Tyson’s path back to mainstream acceptance and celebrity, highlighted by a new interview with ABC News’ Byron Pitts. Check it out:

More than the initial trailer that was released earlier this month, the GMA clip provides a much clearer look at what to expect from the documentary. Particularly notable is the use of animation to depict moments and events in which cameras couldn’t have been present, such as Tyson’s childhood days in Brownsville, Brooklyn.

Several documentaries have employed this technique in recent years — for example, the Bruce Lee 30 For 30, “Be Water” — which can be more effective in portraying past events than dramatized re-enactments.

The ABC News documentary precedes two upcoming scripted series on Tyson. Hulu is developing Iron Mike, a limited series by the filmmakers behind the Tonya Harding biopic I, Tonya. Then, there’s the project Tyson authorized: a limited series starring Jamie Foxx, directed by Antoine Fuqua, and executive-produced by Martin Scorsese. Though both endeavors look appealing, fans certainly have an appetite for the “real” content that a documentary provides.

Mike Tyson: The Knockout premieres on ABC Tuesday, May 25 at 8 p.m. ET. Part 2 will air the following week on June 1, also at 8 p.m. ET. Each part will be available for streaming on Hulu the next day.