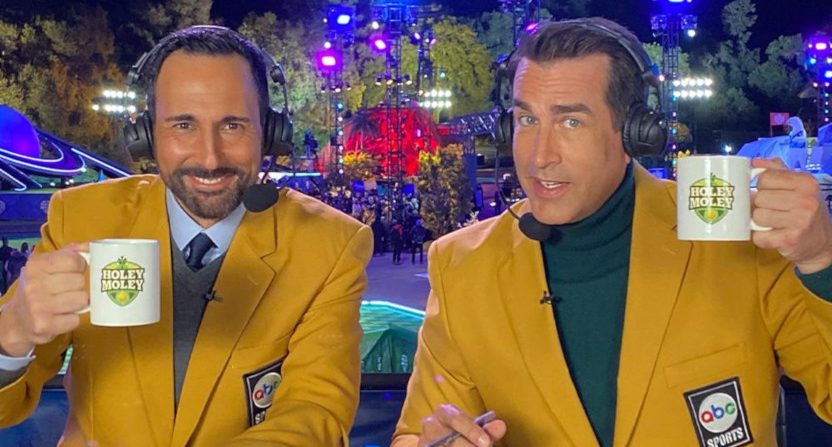 It has long been the position of this writer that ABC extreme minigolf competition Holey Moley is America’s finest television program, a viewpoint that aligns with a position espoused by none less than Uproxx’s Brian Grubb. A large part of what makes the show such fun, especially from a sports broadcasting perspective, is the commentary from Joe Tessitore and Rob Riggle, clad in 1970s ABC Sports golden blazers and generally riffing on extreme wipeouts in a way that would make Howard Cosell proud. Tessitore spoke to AA about Holey Moley around the first and second seasons, and it’s clear he’s still having a lot of fun with the show. This week, ahead of the show’s third-season finale (set for Thursday, Sept. 23), Tessitore spoke to Andy Staples of The Athletic. Most of that podcast is about Tessitore’s work calling college football, but around the 43-minute mark, they get into Holey Moley, and it’s that part of the conversation that’s really a delight.

“It’s become in my career probably the thing that brings me the most joy,” Tessitore tells Staples. “…When you work in primetime entertainment and you do something that’s really a comedy show at the end of the day, just masked as extreme minigolf, we’re doing a buddy comedy, a one-hour buddy comedy on ABC. It touches people differently, it affects people differently. The star of the game, the star is the game when you’re broadcasting a game. I’m not looking to be the star of an ABC college football broadcast, I want the game, the action, the score, the drama to be the star. But when you’re doing prime time entertainment, you realize you connect with the audience in a far different way.”

Tessitore then goes on to reveal that they’ve already filmed a fourth season, and mentions that most of the public interactions he gets these days are from Holey Moley rather than his college or NFL work.

“And the show’s been on now, we’ve filmed season four. When you’ve got the momentum and the promotion, it just touches my heart that a kid like Will Staples, his friends, families get together, it’s multigenerational. I get recognized more than anything, restaurants, airports, just anywhere because of that show now. And from anybody. Andy, the college football crowd you know now, if you’re travelling through Atlanta airport, you’re at certain places in college towns, you get it, you know you’re going to be recognized. This is anywhere, anytime.”

Tessitore then tells Staples about how much he’s learned from co-host Riggle.

“Rob’s done a great job of teaching me the nuances of buddy comedy. And it’s been great, because we had the one space-themed hole called Uranus. …And he’s just such a master craftsman at being a comedic actor and teaching me how to deliver the lines, and the looks, and the timing. And sure enough, one of the years we had a contestant on Uranus, a ball was lodged up Uranus, and the guy we make fun of on the show, Course Marshal Joe (and Course Marshal Colin), he had to stick his hand up Uranus and pull it out.”

As Tessitore told AA ahead of the second season,  Holey Moley has long had a thematic connection to ABC’s The Wide World Of Sports, including with the gold Blazers. That’s been particularly evident this year, with a “The Agony Of Defeat” hole strongly recalling the ski jump fail used in the Wide World of Sports opening credits:

Tessitore also talked with Staples about those famed 1970s ABC Sports gold blazers he and Riggle are wearing.

“I’m telling you for a fact it is so much fun to do this show, because two grown men wearing gold polyester jackets from the 1970s that still smell like mothballs, we will sit there and be incapable of continuing to go on for 45 minutes because tears are coming down the sides of our faces from being so stupid. And ABC is putting us on air being this stupid. And I apologize to all the parents out there for the Uranus hole, and the pecker hole, and the buns n’ wieners hole. But the ratings are great, the Hulu numbers are through the roof, and we’re making kids laugh, so, so be it.”

A big question for many Holey Moley viewers is just what’s in the mugs that Tessitore and Riggle are drinking out of (now available from ABC’s online store!). Tessitore told Staples it’s fair that people suspect it’s alcohol, but it’s actually just caffeine, and the real silliness is coming from sleep deprivation.

“So the two mugs that are on the desk, everybody thinks that there’s Blanco tequila in the mugs because the stuff that comes out of our mouths is so absolutely loopy, but the reason we get so loopy is because we film it from seven o’clock at night until 5:30 in the morning, and we are so sleep-deprived. And it’s cold.”

“We’re an hour north of LA, in Santa Clarita, in the mountains, in a valley, on a ranch, and it drops about 30 degrees; it will get into the high 30s, it’s cold and it’s damp, it’s like a Sinatra lyric. And we are just mainlining espresso. I start with the espresso, and I mean, I do not stop. We need toothpicks holding up our eyelids by the end. We start with Pellegrino and then we move to espresso, and then Rob gets into his Coca-Cola and it’s over, the caffeine rush and the sugar, popping Reese’s Pieces and M&Ms and Nutter Butters, and it just gets so sideways.”

There are a lot of us who appreciate just how sideways Tessitore and Riggle can get, and how much fun they have calling a ludicrous extreme minigolf show that regularly features contestants pummeled by flaming windmills, opening outhouse doors, jousting knights and more. It’s great to hear that there’s already a season four in the can, as that suggests there will be many more contestant wipeouts (and much more delightful commentary from Tessitore and Riggle) in the months ahead.