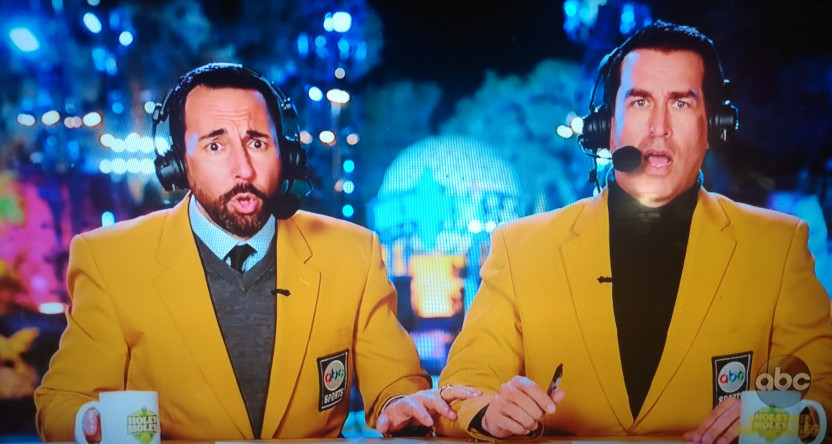 Holey Moley‘s second season finale airs tonight on ABC at 8/7 Central, and it’s wrapping up an incredible run. The Steph Curry-produced extreme minigolf show has taken a huge leap this year, going from generally fun to something that’s been called “The nation’s finest television program” (Brian Grubb, Uproxx) and “The greatest show on television” (Spencer Hall, Moon Crew). (And those are sentiments heartily vouched for from this corner.) And while it’s seemed likely that the show will come back for a third season (they’ve been running promos on the show for Season 3 casting, even), it hasn’t been officially renewed yet. So comments from Rob Mills (ABC’s senior vice president, Alternative Series, Specials & Late-Night Programming) comments to Deadline’s Peter White this week about the show’s future are certainly notable:

Mills told Deadline, “We view Holey Moley as one of our signature shows, it certainly has had a lot of chatter, it’s ratings are up this year. Holey Moley has been one of our breakouts and I’d be shocked that there’s an ABC [next summer] without Holey Moley.”

He added that the fact that ABC owns the rights to the show, which is in the process of being adapted in a number of international territories, makes this a slightly easier decision.

This will bring lots of joy to viewers, but also to Joe Tessitore. A key part of Holey Moley’s success has been the commentary from veteran ESPN announcer Tessitore and veteran comedian Rob Riggle, in the classic ABC Sports gold blazers, no less. As Tessitore described it to AA earlier this year, “What we thought was a primetime reality competition show was actually realized to be a buddy comedy.” And in both that interview and another one before season one, Tessitore has spoken about how much he’s enjoyed calling Holey Moley, and what a nice change it is from his regular serious sports work on football, boxing and more at ESPN. But he went even further on that front in comments to Hall this week; here are some of those.

JT: Do you know how much joy this show brings me in the middle of my regular broadcasting career? You can probably hear it in my voice, but it makes me so happy, the way you see the show, the way I see the show.

SH: I’m going to confess to being negligent, and I just realized it. I wasn’t even going to ask you why you did the show, because it didn’t occur to me that someone wouldn’t want to do this immediately.

JT: There are a lot of guys who’ve had the career arc I’ve had that would scoff at this. I’m sure there are some prominent broadcasters that probably sit back and say, “What the hell is he doing, that’s blasphemous to the craft.” But come on, if you can’t have a blast in life and enjoy it, then why? Maybe that mindset is why I have so much fun doing the show.

Later in that interview (which is worth a read in its entirety for its discussions of how this is shot, including early-morning hours, how Tessitore is related to Lou Costello but playing the Bud Abbott role, and where the regular mockery of Course Marshal Joe came from), Tessitore talks about the drastically different response this has drawn compared to the often-critical feedback from the sports world:

“What makes me happiest is how much children love it. I will be very honest in telling you that the last two and a half years of my life of working in Monday Night Football — the NFL subculture, the endemic NFL media and Twitterverse — it’s not a joyful place. Holey Moley is a place where you’re putting smiles on people’s faces, where people laugh, where families get together to watch you and have a great time.

Sometimes if someone emails or messages me about how much their child loves the show, I’ll send them a video message. I always walk into the closet and show them the jacket and say, “Hey Annabelle, I heard you had a great summer, thank you so much for watching the show, hey … I wonder if I should wear this tonight?” and show them the jacket. And I get the biggest smiles back.

This happens all the time, and it puts me in a very good space. We have good friends of ours who are doctors, cancer researchers, therapists, very serious people, and it’s sometimes hard to not look around and go, “Well, where am I making my impact?” I really enjoy doing entertainment, and I’m really enjoying being part of a comedy team.  Especially this year, and with everything going on, it has been a very nice piece of the pie for me. It’s something with a thread of goodness in it.”

And he’s absolutely right. There’s of course a place for the seriousness around normal sports, but there’s also a place for the complete goofiness that surrounds Holey Moley. It’s a program that has Tessitore and Riggle just being hilarious each week, whether that’s with their latest attempts at straight faces while discussing the likes of “Uranus” and “Hole #2” or with their commentary on contestants’ outfits, catchphrases, and attempts (usually unsuccessful) to avoid wiping out. (And when they do wipe out, there are amazing slow-motion replays of the carnage.) It’s a program that has an animated version of Curry doing “Behind The Hole” segments that seem drawn straight from a stoner cartoon. (These happened in the first season as well, but they’re even better animated.) And it’s a program that’s featured Greg Louganis, an increasingly-deranged Steve Guttenberg, and “Long Jon Lovitz,” amongst others. 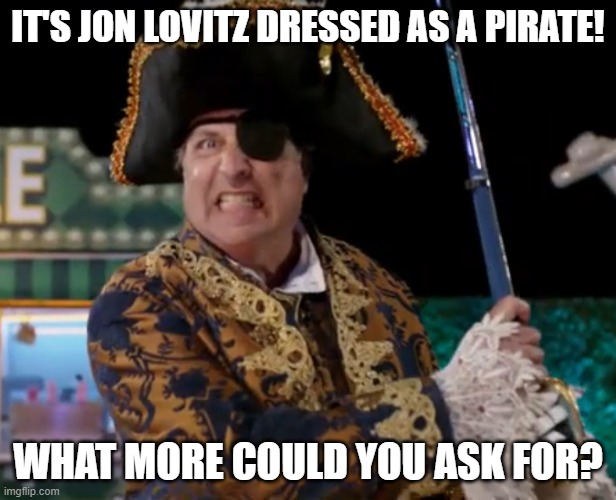 Hell, Holey Moley did a whole Bachelor crossover episode with Chris Harrison, which featured contestants wiping out in evening dress and worked surprisingly well. Here’s one GIF of that from Grubb (there are more in this thread):

The show has featured 15 unique holes this season (which Grubb helpfully ranked here), most of which have the potential for spectacular wipeouts. His top two picks are very solid, Double Dutch Courage and Polcano. Here are some illustrations of the destructive power of those holes. First, “Double Dutch Courage.” Here is a regular wipeout on it:

And here is one from a contestant who managed to wipe out twice on the windmills, in remarkable fashion.

congrats to this holey moley contestant for putting in the single worst effort i've ever seen on the windmills pic.twitter.com/2uKQmmZApb

As noted then, the announcers’ reaction really made it:

This moment, which came in reaction to a woman getting knocked into freezing cold water by a giant windmill for the second time, is part of why Holey Moley deserves all the Emmys. pic.twitter.com/PfUScx5qdN

But Polcano is even better, involving people first putting through Plinko-esque rocks, then taking a hydraulic zipline into a giant pole. It usually doesn’t end well for them:

Mallory deserves extra credit, as she got destroyed by all of Hole #2, Double Dutch Courage, and Polcano, and still managed to win each of her matchups and advance to tonight’s finale with a chance to win $250,000. That’s the kind of perseverance we need this year. And Holey Moley absolutely deserves a third season so we can get more moments like that, more shots of Tessitore and Riggle reacting to wipeouts, and more of them “putting smiles on people’s faces.”