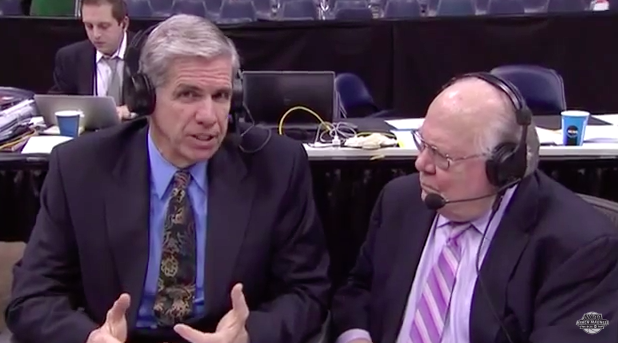 Earlier this week we asked for you, our loyal, faithful, trustworthy readers, to grade the 2016 NCAA Tournament announcers employed by CBS Sports and Turner Sports.

We’ve calculated your grades and averaged out a grade for all eight of the tournament broadcasting teams.

Without further delay, here are those rankings in reverse order…

Reader Comment: Gottlieb is interesting because he clearly knows what he’s talking about, but he always makes some random comments and asides that make him seem unprofessional. It’s like he forgets sometimes that he’s calling a basketball game and just starts acting like he’s hosting his radio show. While that can be a bit annoying, overall he’s better than most people think he is. -stuie299

When it comes to most polarizing tournament announcer, Doug Gottlieb definitely ranks at the top of the list.  Gottlieb can be one of the most knowledgable, and certainly one of the most confident people you’ll ever hear analyze basketball.  However, there’s sometimes that sense that you’re listening to his CBS Sports Minute take on what he’s watching.  Dedes has been a staple of the first weekend of the tournament and that will likely continue for the foreseeable future with so many top play by play announcers in the stacked CBS/Turner lineup.  Gold-Onwude worked her first tournament for CBS as the sideline reporter of this crew.

Another polarizing announcer is Steve Lappas, who has a tendency to dominate the airtime with partner Andrew Catalon.  That was definitely noticed by fans watching and sometimes Lappas’ commentary drifted into some, well, different places. (Although in the interest of fairness, Lappas’ commentary was also praised by the likes of Phil Mushnick.)

Rough end of game for the Little Rock-Purdue announcers.

“What do they say? Whoever brought you to the dance, keep dancing.” – Steve Lappas

Catalon has recovered from this infamous incident a couple years ago and has developed into a solid basketball play-by-play man to go along with his work as the voice of curling in America.  It would be nice to see Catalon and Dedes get even more reps with top analysts throughout the regular season working games for CBS.  On the sidelines, Jamie Erdahl is a name to watch for the future.

Reader Comment: When Bohannon went down with the injury, Gminski quickly said that could be trouble because he was N. Iowa’s inbounder. Might have been the most prophetic analysis of the weekend as events were to prove. – blakesee_74

We try to come up with lists of underrated announcers all the time, but Mike Gminski might be the most underrated of all the underrated because he doesn’t often make those lists.  His analysis of how Northern Iowa would be negatively affected trying to inbound the basketball down the stretch due to injury was an insight that few announcers could deliver in such a pivotal moment.

Gminski and Blackburn had maybe the most exciting batch of games with Northern Iowa’s half court buzzer beater and stunning collapse against A&M.  There were some viewers clamoring for Gus Johnson to call those games.  And look, anybody is going to sound like Joe Buck’s David Tyree call compared to Gus Johnson calling a crazy tournament game.  But if you listen again, the calls of those late game situations are very solid, even if nobody’s brain matter is exploding onto the floor.

Reader Comment: Brian Anderson is outstanding. Smooth and professional while still bringing excitement to big moments. I thought his pairing with Smith was the top crew. They just called the games without going overboard on storylines. – Dallon C.

Anderson and Smith were the big story heading into March Madness as the pair were promoted to the second weekend of the tournament to call Sweet 16 and Elite 8 games.  The duo certainly puts more of Turner’s imprint on the game announcers for the second weekend and even though they leapfrogged another team further up our list, they did nothing over the first weekend to prove that the promotion was not deserved.

The highlight from this crew though may have been Dana Jacobson’s sideline interview with Tom Izzo after the Spartans were upset by Middle Tennessee.

It’s always a little awkward when an NBA analyst is brought in for the tournament and paired with a college basketball analyst.  Reggie Miller has had some partnerships in the past where it’s sounded like oil and water mixing together, but it seems like now that the trio with Kevin Harlan and Dan Bonner is finding their groove.  When it comes to late game dramatic situations in the tournament, there’s probably nobody you’d rather have calling play-by-play in 2016 amongst this group of announcers than Harlan.

Reader Comment: Ian Eagle is the man, and the Webber/Elmore combo has done good things…I’m impressed because Eagle/Spanarkal was magical. – Tim L

It’s clear from our rankings that CBS/Turner have five very good to great announcing teams and it’s a shame that one of them has to be left out of the action on the second weekend.  This year, that team is Eagle, Webber, and Elmore.  Like the team above, it’s always interesting when an announcer who covers the NBA is brought in to partner with someone focused on the college game.  However, Webber and Elmore have developed as good a chemistry as you can from that aspect.  And the smoothness of Eagle probably helps a great deal in that regard.

The top NCAA Tournament broadcasting team has been going through a lot of transitions ever since Billy Packer retired from broadcasting.  We’ve gone from Clark Kellogg joining Jim Nantz to Kellogg and Steve Kerr to Greg Anthony.  But Anthony’s forced removal from the booth allowed CBS and Turner to stumble into what is one of the best “A” teams in sports.  Yes, much of that is owed to the popularity and likability of Bill Raftery finally getting some time to shine.  However, he and Grant Hill have come together to work with Nantz and instantly formed a trio that sound like they’ve called games together for a lot longer.  The interplay with Raftery and Hill as coach and player and elder broadcasting statesman and young apprentice, is always a fun listen.

Reader Comment: Lundquist team was actually very good in my opinion. I felt they enhanced the drama of all the close games they called. – Ryan C

It’s a testament to both Verne Lundquist and Jim Spanarkel that they were able to leave longtime broadcast partners in Bill Raftery and Ian Eagle and immediately form a broadcasting duo that was just as popular.  Spanarkel has always been one of the best analysts working the tournament and his ability to break down and clearly explain a game situation is top notch.  On the sidelines, Allie LaForce continues to establish herself as one of the top reporters in the industry.

Much like SEC football, Uncle Verne isn’t going to give a detailed description of the action happening in front of him.  It’s more likely going to be “WOWs!” and “WHOAs!”  However, the enthusiasm that Verne has for college athletics is infectious and the pair’s call of Stephen F. Austin-Notre Dame’s exciting finish certainly added to the drama and suspense.

And in March Madness, you can’t ask for more than that.