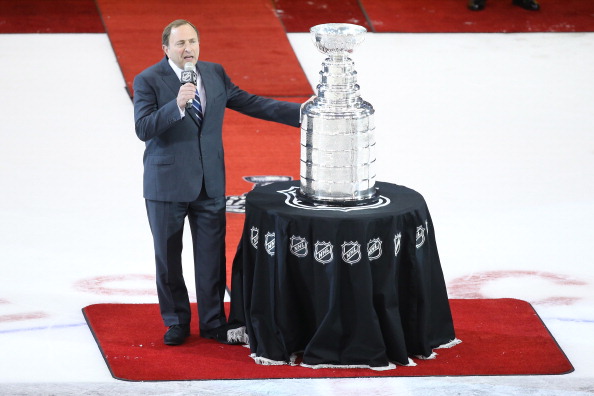 This week, we will a championship clinching game in the NHL and a potential championship clinching game in the NBA. ESPN’s critically-acclaimed documentary 30 for 30 mini-series on O.J. Simpson airs this week on ESPN. The U.S. Open takes place at Oakmont in Fox’s second effort in major golf. The Copa América and EURO 2016 soccer tournaments ramp up in earnest. The College World Series begins in Omaha and MLB continues as well.

Let’s look at what we have in what is a very busy week in sports TV.

The Stanley Cup Final will conclude this week. Either tonight in San Jose with Game 6 or in Pittsburgh Wednesday for Game 7. NBC airs tonight’s game starting at 8 p.m. NHL Network and NBCSN have extensive pregame coverage starting at 6 p.m. ET. Mike Emrick, Ed Olczyk and Pierre McGuire have the call tonight.

And if the series is extended to a 7th and deciding game on Wednesday, NBC will have that as well. Puck drop is after 8 p.m. ET.

In the Association, there’s a potential championship series game on Monday in Oakland as the Golden State Warriors carry a three games to one lead into Oracle Arena. The Cleveland Cavaliers have the Herculean task of extending the series on the road Monday on ABC at 9 p.m. ET. Mike Breen, Mark Jackson and Jeff Van Gundy  will be courtside while Doris Burke roams the sidelines.

If the Cavs win on Monday, they’ll travel back to Cleveland for Game 6 on Thursday night with ABC hitting the air once again at 9 p.m.

The golfing world’s eyes will be focused on Oakmont Country Club in Oakmont, PA for the 116th U.S. Open. This will be Fox’s second effort at the U.S. Open after being heavily criticized for its effort last year in Washington. After jettisoning Greg Norman in January, Fox has signed former ESPN Open Championship analyst Paul Azinger and he’ll be in the 18th tower with Joe Buck and Brad Faxon who was one of the few members of last year’s Fox crew to be praised.

In addition, Mark Brooks and Steve Flesch will be tower announcers for Fox. Ken Brown, Juli Inkster, Scott McCarron and Curtis Strange will be on-course reporters.

Holly Sonders will be the studio host and she’ll be joined by Bob Ford, the director of golf at Oakmont. Course design expert Gil Hanse rules analyst David Fay, Shane Bacon and Jaime Diaz round out the Fox team.

Unlike last year when the U.S. Open was on the West Coast, the golf won’t seep into primetime except for Sunday.

Here’s the schedule with all times Eastern:

FS1 will air a half-hour wrap-up show after each round from Thursday through Sunday.

After the Saturday night debut of O.J.: Made in America on ABC, the rest of the five-part documentary mini-series will air on ESPN this week. We already told you how good the series is, now you can watch it for yourself. The entire series will be made available on the WatchESPN app on Tuesday if you want to binge watch.

But here’s the schedule if you’d rather watch it one part at time:

After the U.S. won Group A, we know they’ll be in the Quarterfinals and be playing in Seattle on Thursday on FS1. The rest of the groups will finish their play this week, then the Quarters begin. FS1 will carry the rest of the group play action. Univision and Univision Deportes will carry Sunday’s and Monday’s action with UniMás entering on Tuesday for Chile vs. Panama, then Univision returns for the late game.

For the quarterfinal round, FS1, Univision and Univision Deportes will air the U.S. quarter on Thursday and Colombia’s game on Friday. But FX will come in to air the rest of the quarters on Saturday.

Let’s look at the schedule and the networks:

Group play really ramps up this week in France as the European Championships. The networks on ESPN will carry all of the games and they’ll also be online on the WatchESPN app.

For each game, ESPN hits the air 30 minutes before kickoff

Plenty of baseball games on the docket this week. Here’s what you’ll see on the various TV partners:

The last NCAA Championship to be decided is the Division I Baseball Championship. We’re currently in the midst of the Super Regionals and they’ll decide the eight teams that will head to Omaha for the College World Series.

Sunday’s Viewing Picks has the schedule for today’s games. If games are required on Monday, ESPN2 and ESPNU will carry them. As many as four games could be played on Monday and the schedule if all of Sunday’s Game 2’s lead to deciding Game 3’s looks like this:

Once the eight team field for the College World Series is decided, they’ll then head to TD Ameritrade Park in Omaha. The first two games of the CWS will be played on ESPN2 Saturday, June 18 at 3 p.m. and 8 p.m. ET. It’s a double elimination tournament that will lead to a Best of Three Championship Series starting the following weekend.

For NASCAR, the Sprint Cup Series takes the week off, but the Camping World Truck and Xfinity Series will be in Iowa for races that will air on FS1 next Saturday at 8:30 p.m. ET and Sunday at 1:30 p.m. respectively.

But the big event for the weekend will be the 24 Hours of Le Mans on FS1 and FS2. This will be the 84th running of the endurance event and here’s the schedule:

And there is your synopsis of what is happening in sports television this week.