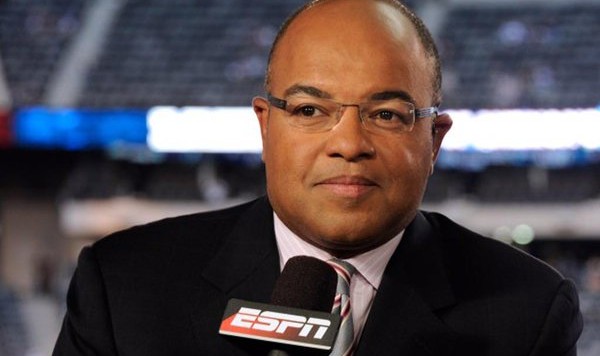 You are one of the most respected and most accomplished individuals working today in your industry.  Over a period of 25 years, you’ve handled every assignment tossed your way and rose all the way to the top of your company in your position.  And by the way, that company is widely considered the “worldwide leader” in its industry and many justifably argue you’re the best worker in your entire profession.  Then one day you decide to take on some new challenges at another company while remaining in the line of work you’ve excelled at for so long.

But then some corporate overlord steps in to say you’re suddenly no longer good enough or important enough or famous enough or whatever enough to do the same job you’ve done so well for so long.

That would be awful, right?  Well, that’s exactly what happened to the NFL forcing Mike Tirico out of Thursday Night Football.  And it stinks on every level.

Over the weekend the New York Daily News reported the NFL was putting a stop to NBC’s plan to have Tirico call the network’s slate of Thursday Night Football games while having Al Michaels call Sunday night games.  In response, the league put out a statement that confirmed it would be telling NBC who would be announcing their Thursday night games.

Doesn’t the NFL have a lot better and more important things to do than worry about which announcer is calling their Thursday night games on television?  It’s a bizarre example of micromanagement that doesn’t make sense no matter how you slice it.

Ok, I do understand it from this regard – the NFL is doing everything they can to make Thursday Night Football a *thing* and make it a premier television attraction.  The NFL wants to own every day and every night of the fall calendar and consume every second of your life that is humanly possible.  It would make sense for the NFL to say to the networks bidding for TNF rights “your top broadcast and production team is going to work Thursday Night Football” to convey that it’s a big deal.  Having Jim Nantz call a Thursday night game instead of say, Spero Dedes (no offense, Spero), sends that message to the viewing audience.

Regardless, even with that under consideration and knowing the NFL can do this because they agreed to it in their contract with the networks… it doesn’t mean they should do it.

* It’s not fair to Mike Tirico

Tirico is one of the best sports announcers working today.  He just got done working his first Olympics for NBC.  He’s called pretty much all of the biggest events in sports – from the NBA Finals and College Football Playoff Championship on radio to various golf and tennis majors on television and pretty much everything in between.  It’s probably easier to name the big sporting events Tirico hasn’t called than the ones he has.  And wait a second, Tirico has called NFL primetime games on national television for the last decade!

It’s just insulting for the NFL to say this to someone who has done nothing but been an excellent voice for the league for the last ten years.  To think that Mike Tirico is somehow below the level of a “lead broadcast” team is ridiculous.  Who on earth is going to think Thursday Night Football is a second rate production if Tirico calls the game instead of Michaels?  No-bo-dy!

Furthermore, I’m sure that the opportunity to call Thursday Night games on NBC was a major part of Tirico moving to NBC at this point in time while he waits to succeed either Michaels or Bob Costas (or both) in some capacity.  Now suddenly Tirico has nothing to do with NFL broadcasts this fall, unless NBC wants to shoehorn him into some kind of Josh Elliott role… and we all know how that worked out.

* It’s not fair to Al Michaels

Let’s look at this from the other side of the coin as well.  Calling Thursday and Sunday games is not an easy thing to do.  On weekends where there wasn’t a nationally televised late Sunday afternoon game on CBS, the network gave Jim Nantz and Phil Simms the weekend off because of the grind that double duty presented.

It’s clearly something NBC was thinking about, according to the Daily News:

In March, NBC Sports boss Mark Lazarus, speaking to reporters at the NFL owners meeting, set the stage for a change, saying both Michaels and Collinsworth were not exactly thrilled about adding more games to their schedules. “It’s a full-time job to do one game a week. It’s not just adding a three-hour broadcast. It’s a substantial amount of work,” Lazarus said at the time. “Nobody raised their hand and said ‘I really want to do double the workload.’”

Michaels is 71 years old and still at the top of his game, but it’s fair to wonder what kind of effect calling Thursday and Sunday night games will have on him and the rest of the NBC crew.  Certainly it’d be a better situation for Michaels, Tirico, and NBC if one could call Sunday games and the other could call Thursday games.

NBC splits Thursday night rights with CBS on a deal worth $450 million per year.  They also pay the NFL $950 million per year to broadcast over Sunday Night Football.  One would think that after writing out a BILLION dollar check to broadcast their games, the least the NFL could do is allow NBC to decide on broadcast assignments that are best for the network instead of meddling in the production business.

And yet, this is par for the course for a league that takes micromanaging to the extreme and is always keen to squeeze their rightsholders to bend to the iron will of the shield at each and every turn.  The NFL has shown they are willing to go to extraordinary lengths in this department over the years… but even as far as deciding broadcast assignments?  Really?

Even if you take the NFL at face value here with their reasoning behind wanting the top announcing teams to work Thursday Night Football telecasts, the league’s total lack of leniency or subjectivity in this arrangement with NBC is just plain strange.  And really, the bottom line is that this is a slap in the face to one of the NFL’s great broadcasters.

For the NFL to deem him not good enough to call Thursday Night Football, after 10 years of being a top NFL announcer, is a truly short-sighted, heavy-handed decision.  Even by the NFL’s standards.