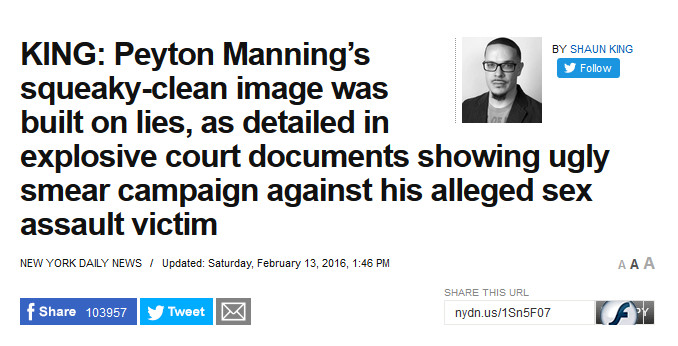 The re-examination of the 1996 Peyton Manning-Jamie Naughright saga sparked by February articles by Robert Silverman and Shaun King kicked off a media fight Wednesday. Manning himself still isn’t talking, but his camp put MMQB reporter Robert Klemko in touch with former Tennessee teammate and roommate Greg Johnson, who agrees with Manning’s claim that the 1996 incident involved only pulling down his pants and no physical contact, unlike Naughright’s claims. Klemko’s resultant piece, published Wednesday at the MMQB, delves deeper into that 1996 incident, with several pro-Manning and/or anti-Naughright sources talking, a few people commenting positively on Naughright’s professional reputation, and Naughright herself declining repeated requests for comment. Most interestingly, though, his tweet promoting it takes a strong shot at King:

I was moved by the @ShaunKing story. I even RT'd it. Then I dug deeper and found how wildly irresponsible it was. https://t.co/8roEUXpcko

Klemko’s claim that King’s story was “wildly irresponsible” isn’t going to be universally accepted, though. There were some obvious issues with how King handled the story, and with his insertion of himself into the narrative and the conclusions he drew in particular,  but whether that rises to the level of “wildly irresponsible” seems like a matter of opinion, especially as the Klemko story isn’t able to completely refute much of King’s story. It doesn’t prove that the locker-room incident happened the way Manning said and not the way Naughright said, it doesn’t provide anything to explain or excuse Manning’s comments about Naughright (including his book’s assertion that “women in the men’s locker room is one of the most misbegotten concessions to equal rights ever made“), and it doesn’t explain how Manning’s testimony in the 2003 case about Naughright’s “vulgar mouth” appears to have come from a situation that the other athletes involved say never happened. Those are all key facets of King’s story, and there’s nothing here that thoroughly debunks them. The central new information here (apart from some commentary on Manning and Johnson from former Tennessee coach Phillip Fulmer, some commentary on Naughright from various sources, and some information on other lawsuits Naughright has filed) is Johnson’s account, and while it’s potentially important, it doesn’t necessarily prove King’s story was factually incorrect or irresponsible.

There’s absolutely a lot of value to having another account from inside that training room, especially as all we’ve seen so far are Manning’s claims and Naughright’s claims (both made in 1996 reports and 2003 legal filings) and a 2002 letter from Tennessee player Malcolm Saxon included in Naughright’s 2003 lawsuit. All three of those people have declined to comment further in the recent wave of media discussion around this case, and all three also turned down Klemko’s requests for comment. However, Johnson’s account that the incident as Naughright described in 2003 “just didn’t happen” deserves some skepticism.

This appears to be the first time anyone other than Manning, Naughright and Saxon has been mentioned in a media piece as being in that room, and it’s interesting that it not only came to light so long after the fact, but that it’s from someone who was close to Manning at the time and who Manning’s camp put in touch with a reporter. (Also, Klemko’s piece said Johnson was initially only willing to talk off the record.) None of that necessarily invalidates his account; in particular, Johnson said he didn’t come forward in 2003 because he didn’t know about that suit thanks to being in the Marine Corps and serving in Iraq at the time. It does mean his account doesn’t seem to provide a complete refutation of King’s story. (Something else that’s really interesting here; Klemko writes that he was told the identity of the unnamed black student-athlete Naughright alleges

The other information here, particularly that on Naughright’s other lawsuits, alleged attempts to get media outlets to cover this story further, and an alleged coarse and threatening voicemail to Archie and Olivia Manning from someone identifying herself as Naughright (which was played for Klemko) is interesting, but it’s also not a full refutation. Even Klemko’s piece appears to admit that:

The MMQB does not intend to suggest that Jamie Naughright’s behavior before or after Feb. 29, 1996, in any way invalidates her claim against Manning. Even if all of these testimonials are 100% accurate, they don’t speak to whether her allegations concerning Manning are truthful or untruthful. They do, however, provide necessary context to the public discussion of a case that, since the Daily News article went viral, has been lacking it.

As further context, there’s value to this piece, especially if nothing arises to question Johnson’s account. It’s adding to the conversation around this case, and to the details known. However, it isn’t able to fully take down King’s piece, or to provide any alternate explanations for the Manning comments that led to Naughright’s 2003 and 2005 lawsuits against him. It may have started another media war, though: King hasn’t gone to the kind of rage he showed against Jason Whitlock, but he made it clear Klemko’s piece doesn’t make him feel the need to change his story:

@TheMisterMarcus @SInow @RobertKlemko //2 witnesses said it wasn't a mooning, 2 say it was. I stand with the victim for a host of reasons.

Update: And it looks like King has decided to leave that conversation:

On @Midday180, @RobertKlemko says an unhappy @ShaunKing DMed him after the Manning story was posted, then blocked him.

In the end, the takeaway appears to be that we’ll probably see many more media arguments about the Manning-Naughright saga in the days ahead.