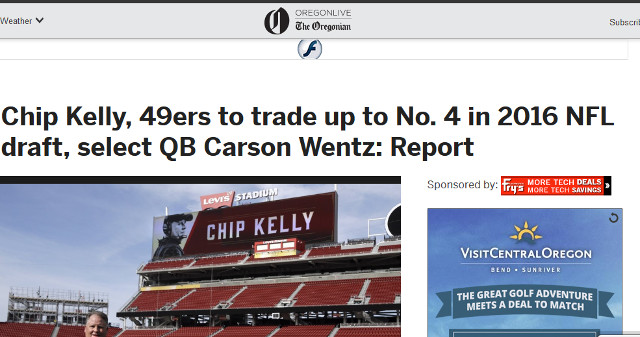 There’s a substantial proliferation of mock drafts with all sorts of trade scenarios ahead of the April 28-30 NFL draft, and one sportswriter appears to have confused one for an actual news report. Geoffrey C. Arnold of Portland’s The Oregonian and its Oregon Live website wrote a piece Monday headlined “Chip Kelly, 49ers to trade up to No. 4 in 2016 NFL draft, select QB Carson Wentz: Report.” Sounds interesting, right? Well, it does until you consider that the “report” in question is a CBS Sports mock draft from Jared Dubin, which makes it very clear in both its headline (“2016 NFL Mock Draft: 49ers trade up to No. 4 spot, land Carson Wentz”) and its body (“Version 6.0 of the mock draft”) that it is a mock draft and not an actual news report. Here’s what Arnold wrote about it, though:

Chip Kelly and the San Francisco 49ers may have figured out a way to select a quarterback in the 2016 NFL Draft.

The 49ers will make a trade with the Dallas Cowboys and move up to the fourth overall position and select North Dakota State quarterback Carson Wentz, according to a report.

Currently, the 49ers possess the seventh overall pick of the draft. Quarterback Colin Kaepernick participated in the team’s offseason training program, but his status is uncertain. He may be traded or he may remain with the team. Blaine Gabbert is also on the roster, but there is some speculation the 49ers want to select a quarterback to groom for the future.

The 49ers probably felt fairly confident either Wentz or Jared Goff would be available at the seventh pick. However, the Los Angeles Rams swooped in and completed a trade with the Tennessee Titans to acquire the top overall pick. The Rams are expected to select either Wentz or Goff with the top pick.

First, the analysis here doesn’t seem that great (many didn’t have one of those players lasting until #7 even before the Rams-Titans trade), but even more importantly, the citation and understanding of what Dubin wrote is a total misunderstanding. The only mention of Dubin’s piece is the “move up to the fourth” hyperlink, which would be fine if not ideal (author and outlet) linking under normal circumstances, but barely stands out at all when you consider all the surrounding Oregon Live hyperlinks for teams and players. But beyond that, how could Arnold possibly have interpreted Dubin’s piece as an actual report that the 49ers would do that? Does he not know what a mock draft is? That may be the case, as he doubled down on Twitter by telling critics who asked where he was getting this to read the hyperlinked “move up to the fourth” report:

The worst part of this? Because Oregon Live is normally a reputable source, Arnold’s misunderstanding of mock drafts became an actual Google News headline Monday night:

Yep, it was the top Google News result for a variety of searches Monday, including “Chip Kelly” and “Chip Kelly Carson Wentz.” So, like the Cleveland Plain Dealer‘s reporting of a fake ABC News piece on the NBA threatening North Carolina last week, fake news became real news. And all because a sportswriter aggregated poorly and didn’t understand what a mock draft was…