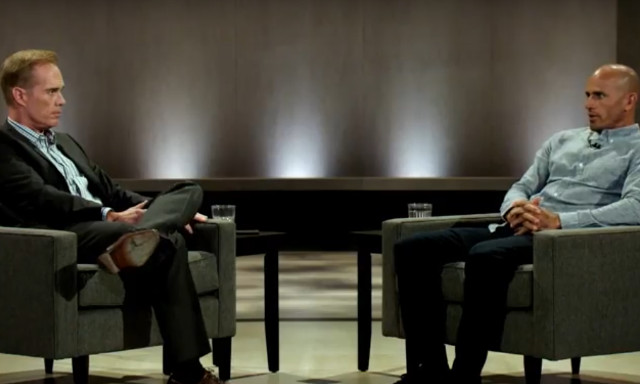 Surfing doesn’t always receive a lot of attention in the sports media world, but that’s starting to change a bit thanks to the 2020 Olympics officially adding the sport. That’s reflected in Joe Buck’s Undeniable interview show, which has often focused on big-name athletes in more conventional sports, but opted to go with surfing legend Kelly Slater for their second episode of Season 2.

The episode, which airs Wednesday night at 8 p.m. on AT&T/DirecTV’s Audience channel (239 on DirecTV, 1114 on AT&T U-verse), sees 11-time world surf champion Slater discuss surfing in the Olympics with Buck, but the most memorable part may be Slater’s thoughts on Jeff Spicoli, the fictional surfer played by Sean Penn in the 1982 film Fast Times at Ridgemont High:

“I love in that movie where there’s the flashbacks, and he’s imagining himself on TV talking about winning tournaments,” Slater said. “When I met Sean Penn for the first time, I said, ‘First things first, I don’t know how you feel about it, but Spicoli’s the best character in any movie that ever happened.’ And he was like ‘Really?’ And I was like ‘Tell me, where did you get it from?’ And he goes ‘I basically just copied this guy I grew up with on the beach at Malibu, and I just imitated him.'”

Slater goes on to say that his mom cracked down on “surfer talk,” though.

“She’s like ‘Don’t sound like an idiot or I’ll smack you in the head.’ My mom really instilled certain principles; she said, don’t be cocky, you’re not better than anyone, just do your thing and be good at it.”

But he does have a pretty decent Spicoli impression that he briefly busts out.

Slater also spoke with Buck on the pros and cons of surfing in the Olympics. Here’s that clip:

“If you told me what the conditions are going to be, I could pretty much give you three guys that are going to win, it’s going to be between those three guys. But we have a title that does it over different types of waves, different places over the course of a year, so it’s a long performance, so you weed out sort of the best of the best at the end.”

Those are certainly valid points from Slater, and they illustrate why Olympic surfing may not be the pinnacle of the sport. However, it could have its own merits, though. Maybe it will inspire a future generation of Jeff Spicolis.