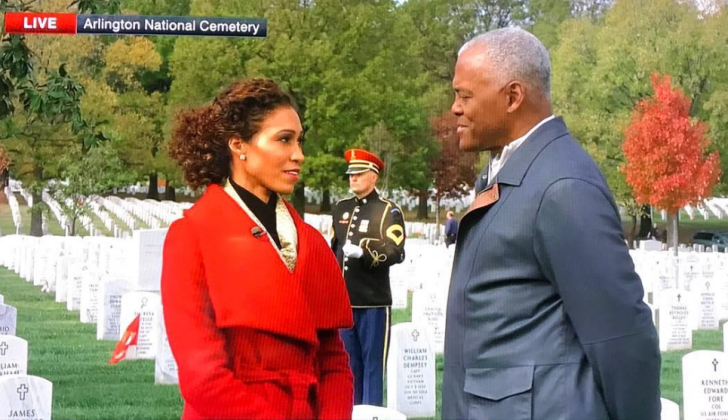 Complaining about NFL anthem protests somehow disrespecting the military is a regularly–featured hot take around these parts despite (the veterans who have supported those protests), and ESPN’s Sage Steele is the latest to join in on that trend. Steele was visiting Arlington National Cemetery this week for ESPN’s “Salute To Our Veterans,” and she tweeted a photo of graves there Sunday night to criticize Tampa Bay Bucccaneers’ receiver Mike Evans for his protest against Donald Trump:

It’s not surprising that Steele is pro-military; as SportsGrid’s Tanya Ray Fox notes, her father, Colonel Gary Steele, became the first black player to play varsity football for West Point 50 years ago (which Steele herself discusses in an ESPN feature here). However, being pro-military doesn’t have to make you anti-protest. This isn’t the first rant Steele has had about protests, though; here’s what she told Scott Allen of The Washington Post last week (in a piece largely focused on her Veterans Day coverage):

“I just think there are other ways to express yourself,” Steele said. “No matter what, you stand when the national anthem is being sung, the Pledge of Allegiance, no matter what it is. You stand up, you put your hand on your heart, you don’t talk, you take your hat off and you [show] respect, period. I have no patience for anything less, but I respect his right to do what he wants. I just don’t respect what he’s doing. If I ever saw my kid doing it, we’d have a frank conversation and I would remind them of where their great grandfather is buried and what he gave up. . . . My military ties run deep and I just think that we can come up with better ways to express our views.”

So, yeah, let’s conflate protests and the military a little more there. It’s also interesting that Steele’s quite willing to talk politics and protests, not just “celebrity stuff,” when it’s about positions that she has.