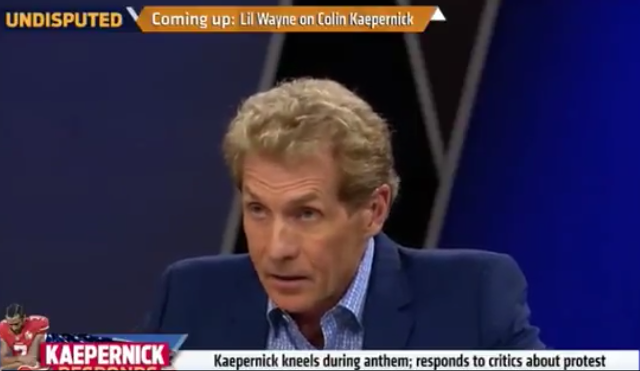 FS1 has been punching up at ESPN ever since the network launched in 2013. Even before Fox Sports 1 came into existence in August that year, people at Fox were saying that it was time for someone to come along and challenge ESPN. They even attempted to paint ESPN as the stodgy, old, curmudgeon in sports television while FS1 was going to be “the one for fun.”

That strategy didn’t work out so well and FS1 abandoned it as quickly as you could say “Skip Bayless.”

FS1’s next attempt at trying to conquer the self-proclaimed worldwide leader in sports was to build their network around former ESPN talent – specifically, the most polarizing, opinion-driven ESPN talent. When Fox hired former ESPN Embrace Debate czar Jamie Horowitz to oversee FS1, it was obvious that FS1 was now going to try to beat ESPN at their own game by going to an all debate all the time strategy. Bizarrely, they’ve also been trying to paint ESPN as a liberal network, attempting to make this the sports world’s version of Fox News vs MSNBC.

That really isn’t working either. And ESPN is finally ready to swing back at FS1.

ESPN has reversed their strategy of trying to ignore FS1 with ESPN VP Burke Magnus coming out on a counter-offensive in Sports Illustrated. Magnus told Richard Deitsch what the network really thinks of their brash would-be challenger with some quotes that are sure to be bulletin board material in Los Angeles.

“I think their strategy here has been—and frankly this part has worked—they are only getting headlines when they bash ESPN,” said Burke Magnus, ESPN’s executive vice president for programming and scheduling and one of the top execs in the company. “It is almost never for the quality of what they do. That strategy is fine but at some point there has to be substance behind it. Otherwise, it’s just noise.”

Magnus said he does not believe FS1’s lineup of opinion-based talkers from 9:30 a.m.-6:00 p.m. ET will be a successful recipe to surpass ESPN.

“I think they have made a big mistake in abandoning journalism and abandoning news and information completely for all debate. It is never going to be one thing for anyone. It’s not one thing for us and never has been about one thing. We have a variety of opinion shows—or call them debate shows—that have been highly successful for us in a long time as part of an array of offerings including SportsCenter, live events and storytelling like E:60 and 30 for 30. It’s that combination that has been successful. They may have a hit here or there with a particular show but it really needs to be more diverse than that in my opinion.”

“Their claims seem somewhat ridiculous,” Magnus said. “They are doing their thing; we are doing ours. We like the hand we have. None of the noise about [ESPN2’s] First Takevs. [FS1’s] Undisputed is going to be a referendum for success or failure here … Our belief here is that we are well positioned. We have a rights portfolio that is a mile deep and they are extended in most cases well out into the next decade if not further. We have a rich history of high quality news and information and journalism. We have our own variety of compelling and diverse opinion shows. We take a multi-platform approach which has always been part of our DNA. And we have a great focus on long-form storytelling.”

There are some days when FS1 has EIGHT AND A HALF CONSECUTIVE HOURS of debate or opinion-driven programming during the daytime hours between Skip and Shannon Undisputed, The Herd, Speak for Yourself, and replays of said programs. Eight and a half hours! While it may be a bit eyebrow-raising to see ESPN thumb their nose at FS1 for going to debate-centered programming given Bristol started the entire movement, at least ESPN has still maintained shows like Outside the Lines, SportsCenter, and 30 for 30.

FS1 has abandoned journalism and they have abandoned news. Those are fair criticisms. What’s FS1’s answer to ESPN’s ability to break news and cover the biggest stories in sports – TMZ Sports? While ESPN is doing serious investigative reporting and breaking major stories, FS1 is doing things like “Guess That Booty.” FS1 just is not competitive in news and journalism. And they’re still far from ESPN’s level when it comes to live sports rights. FS1 has made some strides in that department with MLB playoff games and NASCAR races but instead of biding their time and filling their schedule with more live rights, they’ve decided to invest millions and millions of dollars in talking heads, none of which can even bring consistent six figure viewership.

The only place where ESPN has been surpassed by FS1 is in hot takes. And at this point, as long as FS1’s debate shows can’t even outpace NASCAR Race Hub on their own network, it is just noise.