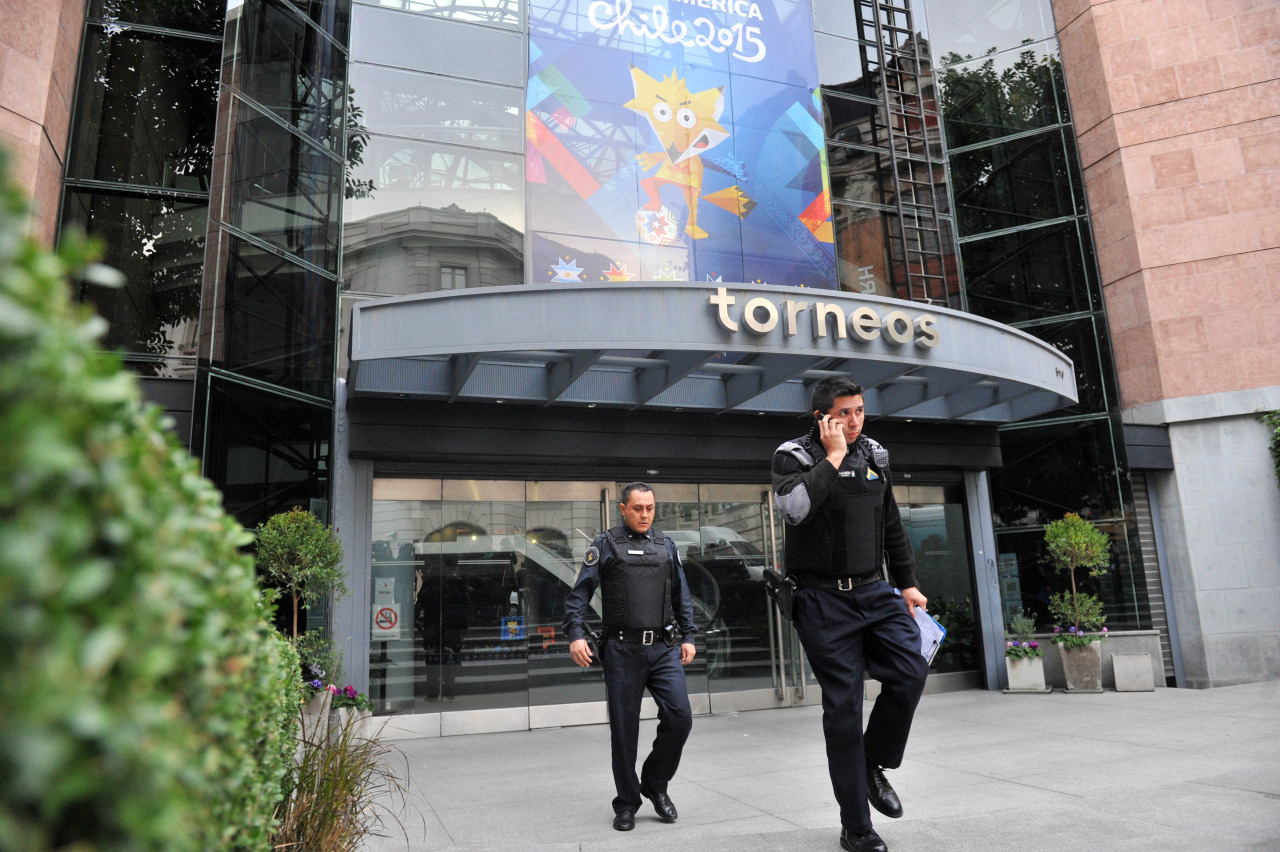 The FIFA corruption scandal involves not just executives, but also media companies, and some with major ties to U.S. companies and broadcasters. As we discussed last December, one of the key companies involved is Cayman Islands-registered T&T, which is partly owned by both Fox and DirecTV (and thus, now by AT&T). T&T is closely related to Argentinian (yes, that’s the best adjective to use) company Torneos y Competencias SA, which controls 25 per cent of T&T (the other 75 per cent is controlled by a Fox affiliate).

Torneos, which is 40 per cent owned by DirecTV, has been charged with one count of wire fraud conspiracy by the U.S. Department of Justice. They agreed Tuesday to pay the DoJ about $112.8 million (forfeiting $89 million and paying a $23.76 million penalty) in exchange for a deferred prosecution agreement that will see the charge dropped if they follow the agreement’s terms for four years. As Reuters’ Mica Rosenberg and Nate Raymond write, this deal could affect the value of DirecTV’s stake:

Argentina-based Torneos is 40 percent owned by DirecTV, which AT&T Inc acquired in 2015. In August 2015, DirecTV valued its stake in Torneos as worth $147 million, but said its investment could be adversely impacted by the probe.

The case against Torneos came after former CEO Alejandro Burzaco pleaded guilty in November 2015 to having agreed to pay bribes and kickbacks to multiple officials, including the South American soccer governing body CONMEBOL and FIFA.

Burzaco said the bribes had been paid since before he acquired a stake in Torneos in 2005. The goal was to obtain the marketing rights to various tournaments, including the 2018, 2022, 2026, and 2030 World Cup finals, he said.

In 2013, Torneos also formed a joint venture called Datisa with two other companies that agreed to pay tens of millions of dollars in bribes to CONMEBOL officials in connection with a$317.5 million contract, the indictment said.

So, what exactly was Torneos doing? Well, it’s about much more than just future World Cups; there were plenty of bribes paid for actual TV rights to tournaments, including the Copa Libertadores and Copa America. The 92-count superseding indictment filed last December has a lot of the details; you can read more about that indictment on the DoJ’s website here, and/or download the direct superseding indictment as a PDF here. Here’s one key paragraph from pages 47 and 48 of that indictment:

114. Torneos, along with its affiliates and subsidiaries, also was engaged in the commercialization of media and marketing rights to various soccer tournaments and matches within the CONMEBOL region, including the Copa Libertadores, Copa America, and various friendly matches. For example, starting in or about 1999 and continuing to the present, Torneos and its partners held the broadcasting rights to each edition of the Copa Libertadores, among other tournaments. Alejandro Burzaco, among other co-conspirators affiliated with Torneos, secured those rights through the systematic payment of bribes and kickbacks to high-ranking CONMEBOL officials, including the defendants JUAN ANGEL NAPOUT, MANUEL BURGA, CARLOS CHAVEZ, LUIS CHIRIBOGA, MARCO POLO DEL NERO, EDUARDO DELUCA, RAFAEL ESQUIVEL, EUGENIO FIGUEREDO, NICOLAS LEOZ, JOSE MARIA MARIN, JOSE LUIS MEISZNER, ROMER OSUNA, and RICARDO TEIXEIRA.

And here’s what the indictment goes on to say about T&T and the worldwide broadcasting rights to these tournaments on page 76:

177. Beginning in or about 1999 and continuing through 2015, T&T Sports Marketing Ltd (“T&T”), a Torneos affiliate domiciled in the Cayman Islands, acquired the exclusive worldwide broadcasting rights to each edition of the Copa Libertadores, and eventually to the Copa Sudamericana and Recopa Sudamericana, through a series of contracts between T&T and CONMEBOL. T&T was owned in part by Torneos y Competencias S.A. and in part by partners in the venture, including, for a brief period, Traffic, and, later, a group of investors that included an affiliate of a major broadcasting company headquartered in the United States whose identity is known to the Grand Jury.

That affiliate is connected to Fox. Here’s what Reuters’ Rosenberg and David Ingram wrote last December about T&T’s ownership:

Today, only two companies own shares in T&T. A Fox affiliate owns 75 percent and Torneos owns 25 percent, according to Torneos.

Fox’s relationship with T&T dates back to 2002, when the company joined forces with Liberty Media Corp and a subsidiary of private equity firm Hicks, Muse, Tate & Furst to form a venture called Fox Pan American Sports. As part of the deal, Hicks transferred its 50 percent stake in T&T to the new venture, according to government documents from Argentina. Fox completed its takeover of Fox Pan American Sports in late 2011, according to U.S. securities filings.

As that piece also notes, T&T was not a broadcaster, but obtained broadcast rights and sold them on to broadcasters. In the case of the Copa Libertadores (the top South American club tournament) and the Copa Sudamericana (another South American club tournament), they sold those rights to Fox. And there’s another company that has a big problem with that: GolTV. Last month, GolTV filed a lawsuit in Florida against Fox Sports Latin America, accusing Fox executives of money laundering, wire fraud, bribery and more to get those rights despite bidding less than GolTV. Here’s more on that lawsuit from Will Hobson and Irene Caselli of The Washington Post:

In 2002, the lawsuit alleges, Fox Sports Latin America acquired an ownership stake in T&T Sports Marketing. From 2005 through 2015, the complaint states, Fox executives channeled millions in bribes through T&T to several officials at CONMEBOL. The bribes would be paid through “consulting” contracts between T&T and companies controlled by CONMEBOL officials, the complaint states.

CONMEBOL repeatedly awarded the television rights to tournaments to T&T, which then turned the rights over to Fox Sports, according to the lawsuit.

“Fox employees not only knew of the bribes paid to CONMEBOL . . . they were personally involved in authorizing and facilitating the payment of those bribes,” the lawsuit states. “For example . . . Ganley signed many of the sham ‘consulting’ agreements . . . that channeled bribes to CONMEBOL’s directors.”

That lawsuit also includes allegations that former FIFA VP Eugenio Figueredo said “the company FOX was behind all the illegal negotiations and he indicates a manager whose last name was Martinez as the one responsible” in his plea agreement with Uruguayan prosecutors, and alleges that CONMEBOL repeatedly chose lower bids from T&T for these tournaments over higher ones from GolTV ($164 million vs $270 million in 2010 for 2011-14, $416 million vs $805 million in 2012 for 2015-20, and $2.1 billion versus $560 million in 2013 for three tournaments for seven years.) For their part, Fox called these allegations “entirely meritless” in a statement:

“This is an entirely meritless claim. Fox had no operational control over any of the entities named in the FIFA indictment, and no Fox employees were implicated,” Fox Network Group said in a statement. “As for GolTV, it has been attempting without success to challenge the award of rights to Fox that were negotiated after the FIFA indictment, with full transparency to CONMEBOL,” the FIFA organization that oversees soccer in South America. “This lawsuit will fail just as GolTV’s previous efforts have failed.”

There’s been no news on that suit since then, but if it finds any success, that could post big problems for both Fox and AT&T (given DirecTV’s ownership stake in Torneos, which in turn has that 25 per cent stake in T&T). However, the Torneos deal with the DoJ may help alleviate other worries; a lawsuit from a competitor is less worrying than federal prosecution. This Law360 article (subscription required) quotes Torneos CEO Ignacio Galarza as saying this deal marks the first deferred prosecution deal between the DoJ and a Latin American company, and has him saying “Today it’s a great day for us because we will start to leave this investigation behind.” He’s right on that front, but the full media ramifications of these investigations and lawsuits may still be yet to come.