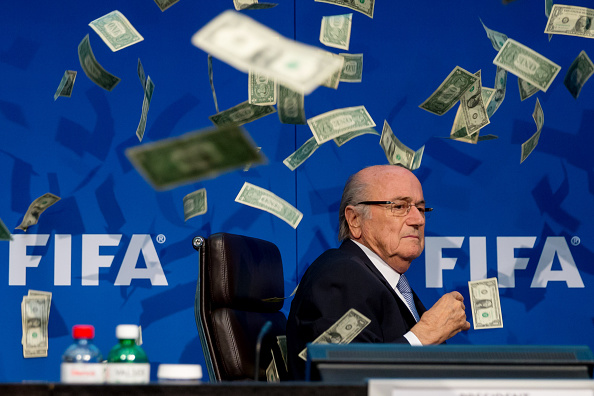 The ongoing FIFA corruption scandal has mostly focused on world soccer executives and third-party companies that sell broadcasting rights so far, but now it might be hitting closer to home for big media companies in the U.S., including Fox Sports and DirecTV. Reuters’ Mica Rosenberg and David Ingram report that “U.S. prosecutors have intensified their focus on media companies and what they might have known about any bribes,” according to their sources, and that one of the key companies involved is partly owned by both Fox and DirecTV:

A sports marketing company that was described in a sweeping indictment this month as retaining contracts because of the “support” of corrupt soccer officials has longstanding ties to the U.S. entertainment company 21st Century Fox, according to securities filings and other government documents. …

21st Century Fox listed T&T as a subsidiary last year in a filing with the U.S. Securities and Exchange Commission. Its investment in the company stretches back to 2002, government documents from the United States and Argentina showed.

Fox had no operational control of T&T, a Fox spokeswoman said. She declined to comment further.

T&T, which is registered in the Cayman Islands, does not have a listed telephone number and it was unclear if it has employees of its own.

So, how is T&T linked to all this? Well, it’s part of a larger ownership web:

One of the three executives, Alejandro Burzaco, the former chairman of Torneos, was indicted for the bribery scheme in the United States in May and pleaded guilty last month. The two others were described in the indictment as co-conspirators but not named. Torneos, a part-owner of T&T with Fox, was not charged.

…Today, only two companies own shares in T&T. A Fox affiliate owns 75 percent and Torneos owns 25 percent, according to Torneos.

Fox’s relationship with T&T dates back to 2002, when the company joined forces with Liberty Media Corp and a subsidiary of private equity firm Hicks, Muse, Tate & Furst to form a venture called Fox Pan American Sports. As part of the deal, Hicks transferred its 50 percent stake in T&T to the new venture, according to government documents from Argentina. Fox completed its takeover of Fox Pan American Sports in late 2011, according to U.S. securities filings. …

Satellite-TV company DirecTV also has an interest in T&T, according to a securities filing in February. It owns 40 percent of Torneos, which in turn owns 25 percent of T&T’s shares. DirecTV said in August that its $147 million investment in Torneos could be hurt by the ongoing FIFA investigations.

To sum that all up, DirecTV owns 40 percent of a company (Torneos) that’s already seen its former chairman (Burzaco) plead guilty in bribery indictments, and that company owns another company in conjunction with Fox (T&T) that held these Copa Libertadores rights (which Fox acquired for the U.S.).  That doesn’t necessarily mean there are any direct problems for Fox or DirecTV, though. The Reuters piece points out that prosecutors would have to need evidence the bigger companies knew about or were willfully blind to bribery, as subsidiary ownership or investment alone isn’t enough for charges.

Fox and DirecTV haven’t even been named in indictments yet, and while Torneos and T&T have been, neither company has been charged yet (officials at the companies have been, but not the companies themselves). It’s also worth noting that other major companies, such as big Canadian banks’ Caribbean divisions, have been also tied into these indictments, and there haven’t been too many consequences for those companies just yet. Still, this is certainly significant for both Fox and DirecTV.

Perhaps even more notable than any of the particular facts in that Reuters piece is the leadoff comment that “U.S. prosecutors have intensified their focus on media companies and what they might have known about any bribes.” It’s going to be very interesting to see just how hard they investigate big U.S. media companies, and if anything turns up from that. Also, while most of the indictments so far have focused on individual nations’ World Cup qualifying broadcast packages and some North and South American tournaments, it wouldn’t be surprising to see at least a look at how Fox acquired the 2026 World Cup rights without a formal bidding process as well.

It’s quite possible that nothing will come of this at major U.S. media companies, and that the damage will be limited to Torneos and T&T executives. Still, at the very least, it’s fascinating to hear that prosecutors are taking a look at U.S. media giants as well as smaller marketing companies. We’ll see how this all unravels in the days to come.