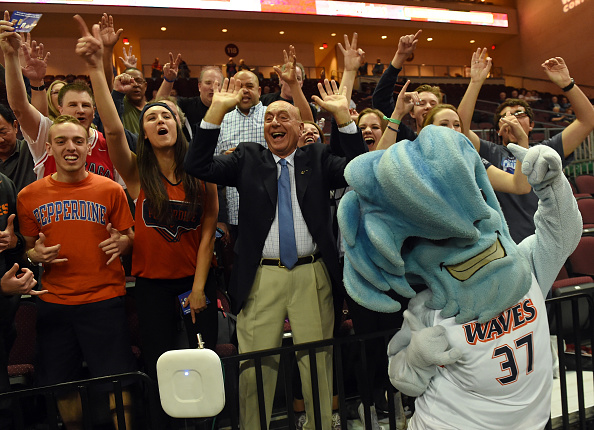 We all know about Dick Vitale’s passion for college basketball. It always comes through when he’s calling a game on ESPN. Another subject he’s passionate about is pedriatric cancer. When he’s not talking about college basketball, Dickie V. is doing all he can to raise money for pediatric cancer research. His 11th annual Dick Vitale Gala for Cancer Research takes place tonight at the Ritz-Carlton Sarasota in Florida where he’s hoping to raise $2.5 million.

And while he’s noted for talking about Prime Time Players (PTP’ers) or his beloved Dookies, Vitale told the Associated Press that raising money for pediatric cancer is something that takes much of his free time:

“I’m 76 and I’m obsessed with this,” he said Wednesday. “I’m in 13 halls of fame. A guy who couldn’t play a lick but just showed the passion and love I have for the game. I want to show that passion now for pediatric cancer research.”

He mentions the $2.5 million goal for this year’s gala due to the fact that pediatric cancer doesn’t get enough in fundraising dollars:

“You know what frustrates me? I work 24-7 on this, sending letters, leaving messages and texts, anything to get the word out,” he said. “Yet some of the big football schools could call for a fundraiser for a practice facility or locker room and they would get $15 million easily. All I want is $2.5 million for kids, sick kids.”

And this is not just where Vitale leads the fundraising, then goes away, he meets with kids and their families in hopes of finding a cure and to experience what they’ve been going through in the fight against cancer:

“I get to know them. I get to know their parents. There is nothing as hard as to watch as a parent laying a child to rest,” he said with his voice starting to crack just a bit. “I have had parents come up to me and say I helped save their son’s life or thank me for how we tried to get more pediatric cancer research. Only four cents of every dollar raised goes to pediatric cancer. That’s absurd.”

You can hear Vitale’s voice in the quotes, but it’s something that near and dear to him. He lost his good friend, Jim Valvano to cancer in 1993 and he’s been in the forefront of the V Foundation which was founded in his name.

Among those who will be in attendance at the Dick Vitale Gala will be Robin Roberts of Good Morning America who underwent her own battle with cancer, Bo Ryan, former Wisconsin basketball coach and Urban Meyer, head football coach at the Ohio State University. There will be a raffle for a 2016 Mercedes-Benz convertible and presentations in the name of two kids who died of cancer.

“Last year we raised $2.3 million at the gala,” he said. “We have to help fund the research that will help these kids and their parents. We have to raise $2.5 million.”

For those who want to donate to pediatric cancer research, you’re asked to send them to the V Foundation. Details are at dickvitaleonline.com.