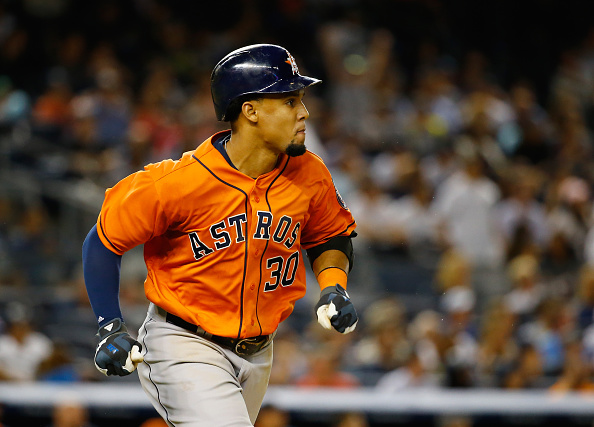 Houston Astros’ center fielder Carlos Gomez is still upset about the way Houston Chronicle columnist Brian T. Smith quoted him in a piece last week. In that column, which is largely Smith saying Gomez hasn’t produced the way fans had expected following the team’s midseason trade for him last year and also includes lines like “We’ve witnessed the dabs, team-first taunts and me-first prancing all across the field,” Smith quotes Gomez as saying “For the last year and this year, I not really do much for this team. The fans be angry.” They be disappointed.” Gomez spoke to ESPN Radio’s Max Bretos and Marly Rivera on their Max y Marly show Thursday, and said Smith’s behavior demeaned him:

“That person knew exactly what he was writing, and he did it intentionally to ridicule me,” Gomez said. “… I do not wish for him to lose his job because he may be a father and have a family, but he should have given a better thought process before writing such comments. Because [he] not only [hurt] a Dominican, but every Latino who makes an effort [to learn] the language.”

“With all due respect to what [reporters] do, they deserve respect, but people like him who want to f— with you because they can f— with you, they should be suspended or fined, just as someone on TV is fined who says something inappropriate,” Gomez told Rivera. “People like this should be fined as well.”

The issue isn’t Gomez denying that he said this quote this way, but that he believes Smith purposefully didn’t clean up his English (which is his second language) and instead purposefully framed his unadulterated quote in a way that made him look dumb. Gomez goes on to say that journalists should be cleaning up his quotes:

“If we are talking about a subject between us and you know we don’t dominate the language properly, whether it is Spanish or English, you guys are the ones who studied this to perfect and polish our words,” Gomez said. “That is your job. My job is to express myself.”

Gomez has a point, especially when it comes to Smith’s article. That piece does read as a pretty substantial attack on Gomez, and the framing of that unadulterated quote certainly can be seen as being used to make him look bad. However, there is a bit of a debate about how journalists should handle direct quotations, and especially grammatically-incorrect ones. Some say it’s better to publish those kinds of quotes exactly as is in order to preserve the speaker’s voice, while others argue that they should be always cleaned up to the highest standards of grammar, and many fall in the middle. Quotes are tricky, and that gets even trickier when a subject isn’t speaking in their first language. It isn’t the media’s job to unilaterally “perfect and polish” players’ words, and that could become problematic if they did it for everyone all the time (would we then be reading how players really talk, or the media-presented version of how they talk?). There is a case to be made that Smith should have transformed Gomez’s quote into grammatically-correct English (especially if that was Gomez’s expectation), or at the very least, a case that he shouldn’t have presented it the way he did, but there are also potentially negative consequences to telling media to “perfect and polish” everything players say.

One way around this when it comes to second-language issues is the use of translators, and MLB’s directive to all clubs to hire full-time Spanish translators ahead of the 2016 season is a positive step on that front. That may make it far more comfortable for many players whose first language is Spanish to interact with the media. However, talking through a translator isn’t perfect either, and Gomez said he prefers not to use one:

“As a baseball player, I like to express myself the way I want to, not that I say something and an interpreter makes it prettier,” he said. “I would like it if a reporter sits and listens to me and then writes things — but in a professional way, not in a way to make fun of me like he did.”

At first glance, it seems somewhat incongruous for Gomez not to want interpreters to make his words prettier, but to instead want journalists to perfect and polish them (which seems like mostly the same thing).  There is a difference, though, and the difference is that the expected changes from journalists here are probably less substantial than there would be in a Spanish-to-English translation, making what’s actually reported closer to what Gomez actually said. (For example, Gomez’s quote is already pretty good English, and it would have read just fine as “For the last year and this year, I didn’t really do much for this team. The fans are angry,” which involves only two changed words, “not” to “didn’t” and “be” to “are”.) It’s laudable that Gomez wants to speak to reporters in English and more directly express himself that way, and he’s quite right that there’s a potential chilling effect if quotes aren’t cleaned up; if others see that Gomez was seemingly mocked for his imperfect English, they’ll be less willing to try and converse in that language. Gomez is also quite right when he says that he respects it when American journalists try to speak in Spanish; if he can forgive some of their mistakes, the same should hold true in reverse.

There’s no easy or one-size-fits-all way to sort out this situation, and it’s probably best to consider things like this on a case-by-case basis. A player’s less-than-perfect English grammar is absolutely no reason to make fun of him, and presenting a quote in that way, or with the intention of demeaning his intelligence, is highly problematic. With the way that Smith took that particular quote from Gomez and put it into this piece, it’s not surprising that Gomez was upset. At the same time, though, reporters shouldn’t be universally expected to always change comments into perfect grammar (and it could be potentially problematic if they did), and players shouldn’t be thought any less of for not speaking with perfect grammar in a second language. The Gomez-Smith situation illustrates some of the pitfalls that can arise from language barriers, and some of the mistakes that can be made, but really, the key takeaway may be Gomez’s opinion that Smith did this to ridicule him. Using a player’s quotes to ridicule him is highly problematic, and avoiding that is probably more important than a universal policy on how much reporters should or should not clean up quotations.