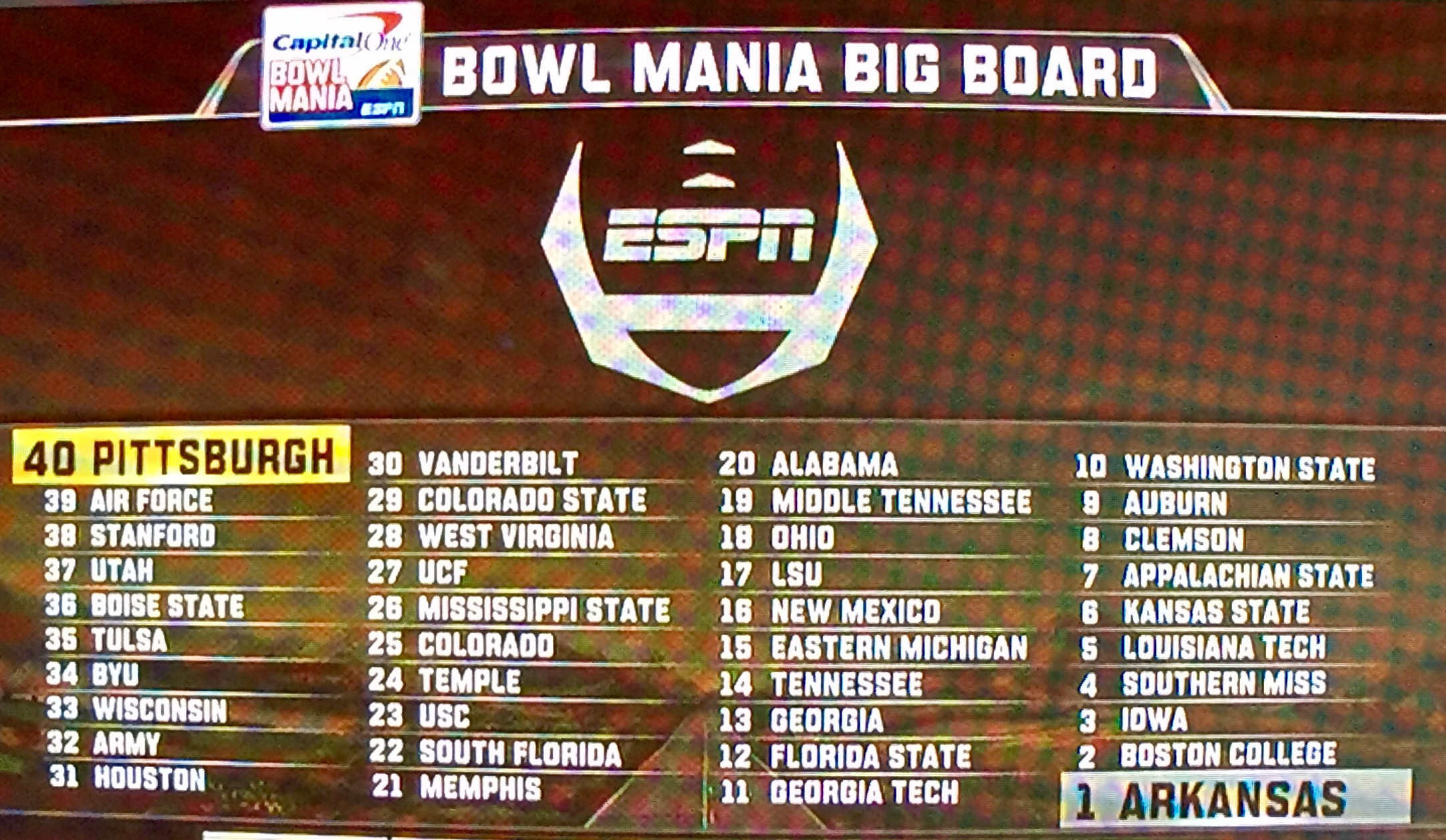 There have been plenty of thinkpieces written about the proliferation of bowls and the declining ticket sales and attendance during the playoff era, but few of them address the real reason for these bowls’ continued existence: television. This Daily Beast piece from TicketIQ founder and CEO Jesse Lawrence does, though, and it’s an interesting and well-rounded look at where bowl ticket sales are at. Here are some of his key points:

Of the 41 bowls being played, less than half will sell out and more games will have tickets available for less than $25 than ever before. Even the once-storied Cotton Bowl has over 10,000 tickets available on the secondary market, starting from $3. In addition to a flooded secondary market, there are many bowl games with demand so low you can’t even buy a ticket on the secondary market, including the St. Pete. With a $450,000 payout split between the two teams, and close to 2 million viewers tuning in each year, the St. Petersburg Bowl, like the Boca Raton Bowl, Armed Forces, and 11 others, is owned and operated by Charlotte-based ESPN Events. Despite the fact that these bowls are not coming anywhere close to their seating capacity, they appear to a money-making model for parent company Disney. …

In the new world of Bowl Economics, regardless of how many $3 tickets are available for the Cotton Bowl, as long as the broadcast comes anywhere close to its 9.18 million five-year average, it will be a financial success. At that rating, the Cotton Bowl would be watched by as many people as ABC’s most popular show, Modern Family. For a company that is very good at selling advertising, that’s extremely valuable and low-cost content, which means we should expect to see more of it in the years to come.

Even the lower-tier bowls are still drawing in viewers for ESPN and ABC. Lawrence mentions that last year’s St. Petersburg Bowl drew 2.4 million viewers to ESPN and that this was only 200,000 more than ABC’s lowest-rated non-scripted show (My Diet Is Better Than Yours), but 2.4 million viewers is nothing to sneeze at (and it’s actually one of the better ratings for lower-tier bowls). As AA’s Matt Yoder discussed earlier this week, every bowl through Dec. 23 was in the top six cable sports ratings for the day, and all but one (the Central Michigan – Tulsa Miami Beach Bowl) pulled in over a million viewers. All but one of those bowls made the top 15 on overall cable, too.

Perhaps most notably, no FS1 or NBCSN programs made the overall cable top 10 during that period, and FS1’s best programming (679,000 viewers for UFC prelims) was below the lowest bowl ESPN aired (that Miami Beach Bowl, with 794,000 viewers). Live sports and live football in particular still are dominant players on TV, and having live football action to air (even on weekdays, even during work hours for some) is better programming than just about anything else ESPN could put in that slot. As long as it continues to be, there’s incentive for Bristol to keep running and/or airing these bowls even if there aren’t many fans buying tickets.

Lawrence makes a further interesting point, though, arguing that the ticket sales could get even lower as virtual reality becomes more commonplace in sports. He thinks VR experiences may add even more reasons to watch games from home rather than go to them:

With virtual reality on the horizon, there’s a dystopic view of future live events where everyone has the same front-row seat on their couch and the actual stadium is empty. In such a world, there’s never a sellout and there’s always a sideline seat available at a fraction of the price of a real one. Companies like Jaunt VR and Next VR are already pushing toward a virtual future with unlimited supply.

As the CEO of a ticketing company, I believe VR is poised to disrupt the current event-attendance model in meaningful ways. As that happens, we should expect the nature of demand for the live experience to change. While the St. Pete and Bahamas Bowls may feel like a crude version one of this new reality, a future without the need to actually sell tickets could create evolutionary opportunities for event promoters that actually benefit fans. Smaller, more-intimate stadium experiences that are a throwback to the old days of smaller stadiums, for one, are already happening, and will likely continue.

This is an idea worth consideration, and VR certainly could have the potential to deliver front-row views. We’re seeing plenty of expansions of virtual reality in the sports broadcasting sphere, and offering a view from particular seats might well be one that could add to the incentive to stay at home. (Whether that view is actually better than the traditional TV broadcast or wider-angle VR offerings may depend on your perspective, but having it available at least as an option to switch to at times would certainly have some merit.) Lawrence is right that this could lead to some opportunities for event promoters, too, and we’re already seeing some of that with smaller new stadiums, interesting food options, pre-game tailgates and other activities, giant screens to offer the replay experience and other attempts to make attending games enticing.

People are going to have to work hard to keep fans coming to games, though, especially to these lower-tier bowls. There are lots of challenges there, including travel and the extra costs that come with it, and we may well see attendance continue to decline even further as broadcasting experiences (including VR) continue to improve. Still, the key overall point here is that as long as these games are profitable for ESPN on the TV side, they’re not going away. For all the stories and all the discussion of bowl proliferation and unsold tickets, it’s the bottom line that really matters, and Lawrence’s article illustrates nicely how that bottom line is currently much more about TV than it is about the in-stadium numbers.