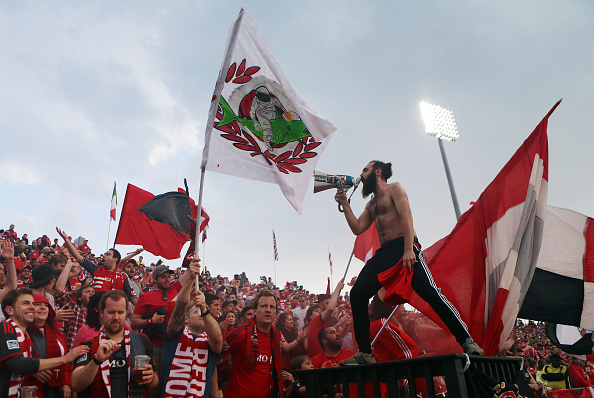 Virtual reality is becoming a bigger and bigger part of sports broadcasts, and Fox has been one of the most involved companies on that front, speaking publicly about their VR strategy, signing a five-year partnership with Next VR, and broadcasting everything from the Daytona 500 to the Bundesliga to Ohio State – Oklahoma. Their next event? Saturday’s Seattle Sounders – Toronto FC MLS Cup Final (8 p.m. Eastern), which will be broadcast in VR in conjunction with LiveLike, a company that’s done plenty of overseas soccer broadcasts with Arsenal, Chelsea, Manchester City and others. The VR broadcast will be available through the Fox Sports VR app and can be viewed with GearVR headsets and on Android and iOS devices.

As Mark J. Burns notes at SportTechie, innovations for this particular broadcast include an Audi sponsorship, replay (on iOS only, however), statistics, and access to a VR highlight suite from different sports. Burns also got an interesting quote from Fox Sports’ Michael Davies, the senior vice-president of field and technical operations (and not the Men In Blazers guy), who said that VR may be developing into more of a second-screen experience while watching the TV feed as well than a pure alternate way to watch an entire broadcast:

Broadcast executives, like Michael Davies (SVP, Field and Technical Operations) of FOX Sports, are still deciphering the role of virtual reality in sports, on what seems to be a varying basis month-to-month. He along with others have started the shift in thinking that maybe virtual reality isn’t a two- or three-hour viewing experience; it might not even be a half hour ‘live’ look-in. Instead, its classification as potentially another second screen, as Davies recently alluded to, has forced rights holders like FOX and technology companies such as LiveLike to provide more reasons for fans to stay engaged within the app.

“The magic window experience, where you’re able to view the game in virtual reality on your phone, is something that viewers might be able to have at your side the entire time,” said Davies about not needing a headset to watch the live broadcast. “… What’s cool about this app and platform is I legitimately think this is one of the more compelling platforms out there right now for sports consumption. Now that we have this 360 theater, you can put some of that content in there.”

That’s certainly interesting, and as Davies notes, it speaks to the importance of making VR content accessible to those who have iOS and Android devices, but don’t have or want a headset. Viewing this on a phone or tablet won’t be the same immersive experience as watching it on a headset, but it has its own merits, allowing viewers to toggle back and forth between different camera angles and rewind (on iOS, at least) in 30-second increments for up to 30 minutes. The lower barrier to entry may help too; the number of people with a compatible iOS or Android device is way higher than the number with a full VR headset, and some of those people may check it out and like the experience enough that they eventually buy headsets.

Beyond that, VR as a second-screen experience could be very beneficial for broadcasters. It means it’s not taking away their existing TV audience, but rather providing another platform to reach them and sell them ads. It’s also notable that there’s a sponsor on this broadcast (for the first time ever on a Fox VR broadcast), another good sign for VR’s long-term viability. VR in sports broadcasts is still evolving, and there are still questions about its long-term future; it may still turn into more of a full-broadcast alternate than a second-screen experience. However, it’s definitely interesting that executives like Davies are now seeing VR as potentially complementary rather than a strict alternative, and that may bolster the case for broadcasters to invest in VR.