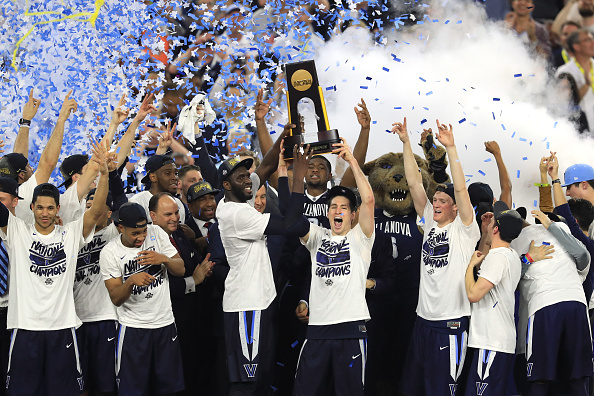 The NCAA announced its new eight-year, $8.8 billion deal with CBS/Turner for NCAA Tournament broadcast rights with a preemptively defensive statement on Twitter.

Part of the NCAA’s business model is to pretend it’s broke, and it’s hard to do that when the association is making $1.1 billion per year solely on the television revenue from a three-week basketball tournament. That doesn’t include any other part of the NCAA’s revenue, nor does it include the hundreds of millions of dollars each major conference brings in from their own television deals and ticket sales, or schools’ own licensing deals.

With billions of dollars in the system, the NCAA needs to justify its rules that prohibit athletes from receiving any of the money. That’s where the 90 percent comes in.

Technically, the NCAA does distribute 90 percent of its revenue to schools. In 2015-16, that was $544 million. But very little of that money actually goes to the athletes in any comprehensible definition of that phrase.

So this year — well before the new deal takes effect — the NCAA will bring in roughly $770 million from the NCAA Tournament. Last year, it brought in $912 million overall. $544 million will go to schools, but only $80 million is required to go to athletes. Assuming the association’s total revenue doesn’t rise, that’s just 8.8 percent of the money actually going to athletes.

But the NCAA takes exception to that argument. It claims that money that goes to coaches and administrators — both from its NCAA Tournament pool and from schools’ own revenues — actually helps athletes. In fact NCAA economic expert Lauren Stiroh even testified with this point in the O’Bannon v. NCAA trial. Unsurprisingly, the judge essentially disregarded the entirety of her testimony in ruling against the NCAA.

It’s completely nonsensical to claim that money that’s going to coaches, administrators and facilities is actually going to athletes. No matter how much you like your job, you probably wouldn’t be okay with your boss taking all of your salary, giving half to himself and using half to buy the most expensive coffee machine on the planet for the whole office to use. Sure, the machine might brew tasty coffee that you can drink, but you’d also probably rather have the money.

What’s worse is that athletes are missing out on tens, if not hundreds of thousands of dollars over the course of their career.

If the NCAA decided to give just 10 percent of the money it earns on the NCAA Tournament every season to every scholarship player on the 351 men’s basketball teams, each player would get $24,107.

That’s just 10 percent! The association would still have $990 million to give to school administrators to buy new cars with.

So what about a more reasonable 50 percent? That’s roughly the percentage of TV revenue that NFL and NBA players get. Remember, that’s not 50 percent of the money generated in college athletics — some schools make hundreds of millions without NCAA money, and every power conference school brings in at least $50 million. With TV contracts going up, those numbers will rise, too. By 2017, Big Ten schools are projected to bring in $45 million per year just on distributions from the conference, to speak nothing of NCAA money, their own licensing deals, etc.

So we have 50 percent of the television money just from this three-week tournament to give out, and nothing else. What can we do with it? We can:

The NCAA does not give 90 percent of its March Madness money to athletes. It gives nearly all of its money to administrators, coaches and facilities, which will now be getting even more.