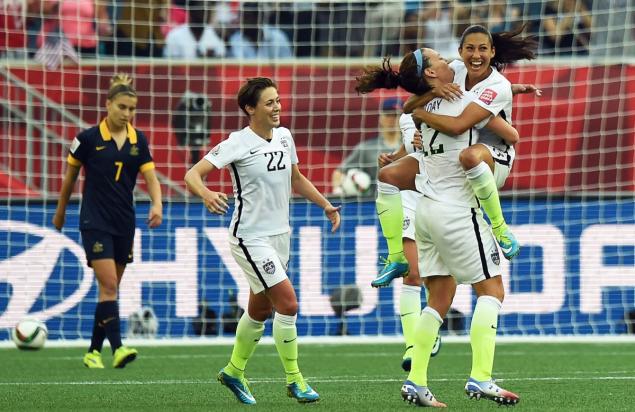 This Women’s World Cup appears to be paying some dividends for Fox, especially when the U.S. women’s team is involved. The USWNT beat Australia 3-1 in their first match of the tournament Monday night in Winnipeg, and the overnight ratings are very strong. Sports Business Daily reports that Fox Sports 1 pulled in a 2.1 for that game. As Sports Media Watch discusses, that’s a big jump from the 2011 Women’s World Cup on ESPN, where the best rating for any of the U.S.’ first three group stage games was a 1.3 against Columbia. Part of that’s thanks to Canada’s friendlier time zones (a 7:30 p.m. Eastern start is much more favourable than the midday games from the 2011 tournament in Germany), but this is still a very good rating for a game on FS1, and one that stacks up favourably to other properties; SMW notes that this is ahead of Sunday’s Champions League final on the main Fox network (1.8) and the Premier League’s final Sunday on NBC’s networks (1.4), and not far behind the competing Stanley Cup Final on NBCSN (which drew a 2.9 Monday night). That suggests that there are potentially even more people willing to tune in for U.S. women’s soccer than for some of Europe’s best men’s games.

Of course, that doesn’t mean that the whole tournament is producing great ratings. As our Dan Levy wrote last week, it’s always been difficult in the past to get viewers to tune in for non-U.S. games, and that appears to still largely be the case. Sports Media Watch reported that the opening weekend of matches averaged a 0.6, and while that’s a 50 per cent jump over 2011, much of that may be due to the time zone and the heavy use of over-the-air Fox. Still, the 1.0 for Germany/Ivory Coast on Fox is impressive, especially considering that that was a 10-0 blowout, and the 0.8 for Norway-Thailand (also on Fox) isn’t bad either. The 0.5 for the tournament’s opening match Saturday, Canada-China on Fox Sports 1, is lower than some might have expected, given the high-profile buildup to it, the involvement of the hosts and the Canadian team’s long-standing rivalry with the U.S., but it’s still not terrible in the grand scheme of FS1 programming. While the non-U.S. ratings aren’t incredible, they are better than we have seen for this tournament in the past.

It’s the U.S. matches that are really going to drive the value of this tournament for Fox, though. The potential audience for those games is huge, and much greater than the potential audience for any other country’s matches, especially as we approach the knockout stage. Thus, how far the U.S. makes it may determine whether all the resources devoted to this tournament were worth it. (This isn’t a situation unique to the U.S.; in Canada, TSN’s hoping for a strong performance from the hosts, and pulled in a record average audience of 2.6 million for the Canada-China opener.)  Fox executives recognize how important U.S. success is for them, with executive producer David Neal saying as much on a conference call last week, as relayed by Michael Lev of The O.C. Register:

“Having said that, this is the world’s most important women’s sports event, and we will cover it fully and with that (same) level of enthusiasm throughout, regardless of the results we get from the U.S. team. But do we hope to see the U.S. team playing in the final on July 5? Absolutely.”

With that in mind, it’s going to be interesting to see how Fox covers the U.S. team throughout this Women’s World Cup. Some of their analysis has been strong and appropriately critical at times, including the commentary during the first half of USA-Australia Monday night. At other times, though, such as the on-air discussion of Outside The Lines‘ report on U.S. keeper Hope Solo, many of Fox’s analysts have seemed more interested in defending and promoting the U.S. team (and Solo, and U.S. Soccer executives) than examining matters through a journalistic lens. Fox has done well to include non-American analysts in their coverage, such as Germany’s Ariane Hingst (an early star of the broadcasts), England’s Kelly Smith and Canada’s Christine Latham, and much of their coverage has been pretty good. Several of the American analysts they have are still very closely tied to the team, though, and that’s led to some weaker commentary. We’ll see how Fox balances their business-led desire to see the U.S. succeed with their journalistic desire to cover this tournament.