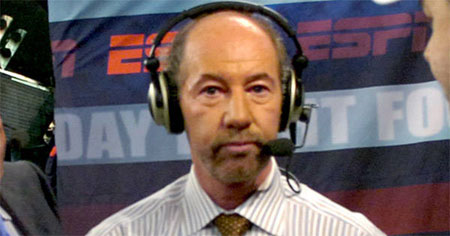 ESPN frequently talks about staying out of politics (see the nixing of then-presidential-candidate Obama as a B.S. Report guest, the suspension of Curt Schilling, and the recent cancellation of Andy Katz’s non-partisan Sirius XM political show after one week), but they keep getting dragged into the political arena anyway thanks to the comments of their employees. The latest to do that, and in particularly spectacular fashion, is none other than Pardon The Interruption co-host and failed Monday Night Football commentator Tony Kornheiser. Kornheiser had Huffington Post/AOL Media global editorial director Howard Fineman on his ESPN 980 D.C. radio show Friday, and they got into a discussion where Kornheiser asked if the Tea Party members in the House were “like ISIS trying to establish a Caliphate here.” Here’s audio of the conversation, via Mediaite:

And here’s the Mediaite transcription of the key part:

Fineman, who was describing the conservative movement in Congress, told Kornheiser that “there are about 40 of those guys and gals who are Tea Party people, who hate the leadership who hate the idea of the leadership, who are hard-core conservatives, who want to shut down the government,” Fineman said, adding that “shutting down the government is like their favorite thing to do.”

Fineman asserted that “the House needs a dictatorial leader,” but Tea Party members don’t want a moderate politician in charge. “These people say, ‘we’re going to do whatever the heck we want, and we’re going to attack whoever the speaker is,’” Fineman said.

Likely Speaker of the House, Paul Ryan, will have to “stage some kind of fight” with Tea Party members, “and defeat them, or take away their power, or go after them,” Fineman posited.

Kornheiser then asked Fineman if the Tea Party members are “like ISIS trying to establish a Caliphate here.”

“Yes! That’s a very good analogy!” Fineman replied. “Without the violence obviously, but yes, they are a rejectionist front.”

There have been some calls to suspend Kornheiser, but there have also been others defending him and calling for greater freedom for political commentary from ESPN employees, including this piece from right-wing columnist Matt K. Lewis of The Daily Caller. There are probably a million different opinions out there on if this analogy’s acceptable and if it isn’t, what, if any, action ESPN should take as a result. At the very least, though, this is well inside the murky political waters the Worldwide Leader hates getting into (seriously, they pulled a non-partisan politics show for being about politics), and it’s actually on an ESPN property (as compared to Schilling, whose comments were made on social media platforms; ESPN said at the time that “At all times during the course of their engagement with us, our commentators are directly linked to ESPN and are the face of our brand.”), so you know there will be discussion of it in Bristol this week. What comes out of that discussion is going to be very interesting to watch.

With the Rams and Chargers preparing to move into the new SoFi Stadium in Los Angeles, Hard Knocks will feature two teams for the first time, but there's a big if.

With the Rams and Chargers preparing to move into the new SoFi Stadium in Los Angeles, Hard Knocks will feature two teams for the first time, but there's a big if.