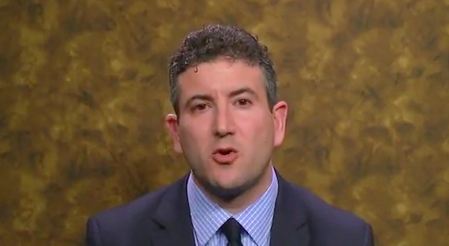 Just a couple weeks ago we told you about a new SiriusXM radio show featuring ESPN’s Andy Katz and ABC News political director Rick Klein called “The Arena,” which would focus on the cross-section of sports and politics.  It’s admittedly a narrow field of interest for most sports fans and most political junkies, but the program did produce an immediate bit of news with Jeb Bush’s thoughts on the Washington Redskins nickname.

All in all, it would seem like a pretty decent idea.  Here’s some good cross-promotional play and Disney synergy for ABC News and ESPN and an opportunity for some interesting relevant commentary given the 2016 presidential race.  At the very least, it’s a harmless radio show, right?

Not in the eyes of ESPN.

Nothing scares Bristol quite like unregulated involvement in politics.  Amazingly after one episode, ESPN yanked Andy Katz from The Arena, effectively shutting the program down.

ESPN’s involvement in politics has always bordered on the absurd.  From the furor over Bill Simmons’ podcast with Barack Obama to the softest of softball interviews from Chris Berman, to the yearly presidential bracket picks, ESPN’s political involvement is a walking contradiction.  The fact that Katz and Klein’s Capital Games ESPN podcast (which the radio show grew out of) still appears to be active while their radio show was shut down is just another example.

Without warning, ESPN management last week pulled Andy Katz from co-hosting a SiriusXM program called “The Arena,” featuring Katz and Rick Klein of ABC News interviewing subjects from the sports and political worlds on how sports-related topics can drive the agenda in Washington. The six-episode run debuted on October 2, and you can see here that Sirius XM promoted the show in a big way. The show aired on SiriusXM’s non-partisan political channel, P.O.T.U.S, and the first (and now only) guest was Florida governor and current GOP candidate Jeb Bush. That conversation produced some interesting news for SiriusXM, ESPN and ABC News, given all three were attached to the project.

Last Thursday SiriusXM confirmed that “The Arena” is no longer airing on SiriusXM. The company declined comment beyond that. If you think it’s strange that a SiriusXM show ended after one episode and no one wants to talk about it, you’d be right. But the onus isn’t on SiriusXM here. It’s on ESPN.

Katz was clearly given an internal green light to do this – SiriusXM isn’t putting out a splashy announcement for a show that talent hasn’t signed on to do – so the question is: what happened? Sources told SI.com that Katz was pulled off the show in an effort to minimize Presidential candidate appearances on platforms connected to ESPN, and the sensitivity of such political identification. The supreme irony here is that Katz and Klein continue to host a politically-based (but ideologically neutral) podcast (Capital Games) on ESPN since 2014.
Klein declined comment via email.

When contacted by SI.com on Sunday, an ESPN spokesperson said, “Some internal miscommunication occurred, and we apologize. ESPN’s policy does not allow for full-time employees to create content for other outlets, so Andy could no longer appear on the show.”

These are the kind of decisions that just make ESPN look silly.  How silly?  ESPN PR staffers were openly promoting The Arena when the announcement of the show was made public.  If you want to put the kibosh on this show, that’s fine, that’s ESPN’s prerogative.  But to do so after the show has been promoted and actually launched just makes the network look incredibly backwards and monumentally disorganized.

The cross section of sports & politics is becoming an additional speciality for @ESPNAndyKatz. http://t.co/bcUzPLV2gU

Here’s the other thing that is really befuddling  – “ESPN’s policy does not allow for full-time employees to create content for other outlets.”  Presumably this would mean ESPN doesn’t want its employees doing work for their competitors.  How then would ESPN explain Stephen A. Smith hosting his own SiriusXM satellite radio show on Mad Dog Radio?  Does it make a difference that ESPN is producing the show, because let me tell you, every weekday Stephen A. Smith and ESPN is creating content for another outlet by hosting a SiriusXM radio show.  Is ESPN breaking its own policy there, or are they letting someone play by a different set of rules?  It certainly wouldn’t be the first time.  As this story shows once again, the only consistency in ESPN’s policies and procedures is inconsistency.