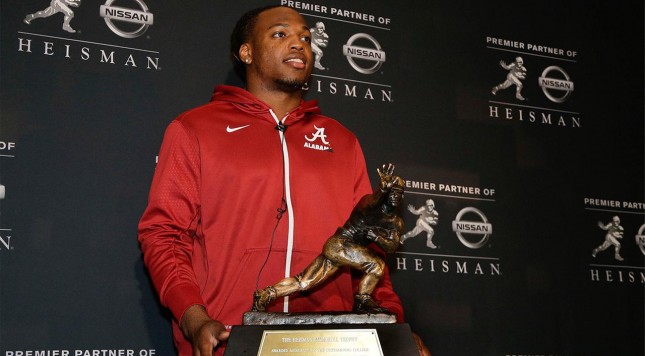 In 2009, a running back from Alabama edged out a guy from Stanford for the Heisman Trophy. Six million people tuned in to watch Mark Ingram hoist the coveted trophy. The 3.6 overnight rating was the highest in the history of the ceremony. The presentation benefitted from the intrigue of a close vote (Ingram beat out Stanford’s Toby Gerhart by 28 votes) as well as the fact that the race included players from high-profile, traditional programs such as Alabama, Texas and Nebraska.

In 2015, a running back from Alabama edged out a guy from Stanford for the Heisman Trophy again. This time, Derrick Henry walked away from this weekend’s ceremony with the trophy held high, beating out Stanford’s Christian McCaffrey. One thing that wasn’t all that high were the ratings. This time, only three million people decided to find out who would win the award. When compared to last season, it denotes a trend.

When you look at the numbers, it’s clear that something must’ve happened to precipitate a sharp change in viewership. In fact, something did happen.

No coincidence Heisman audience has plummeted since the ban on voters disclosing ballots. Zero coverage during the week leading up to it. — Stewart Mandel (@slmandel) December 15, 2015

In 2013, the Heisman Trust decided that voters must keep their ballots secret or face losing their status as eligible voters. The move surely came out a desire to try and keep the suspense for the day of the ceremony. However in doing so, The Trust also eliminated their No. 1 source of PR: the reporters who spend months talking about their Heisman ballots in newspapers, magazines, websites, TV shows and radio shows. 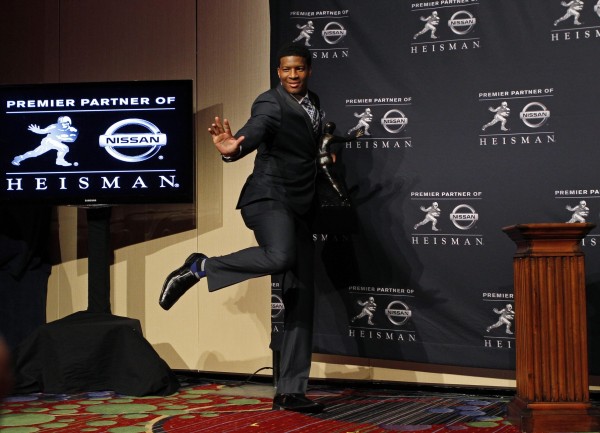 The Heisman has never been anything other than a popularity contest. Steeped in regional bias and driven by narrative, the award often goes to the best player on the best team, or the best player on the most well-known team, rather than to the best overall player in the nation. Notre Dame’s Paul Hornung famously beat out Tennessee’s Johnny Majors and Syracuse’s Jim Brown, amongst others, despite playing for a team that had only won two games at the time. Some would say that if Tim Brown and Don McPherson switched schools in 1987, it would have been McPherson hoisting the Heisman Trophy instead of the Notre Dame receiver.

That said, the jig is certainly up in terms of how “important” it is to win the Heisman. Simply, it’s not. Winning the Heisman does not guarantee you anything in the NFL (Just ask Rashaan Salaam, Tim Tebow and Matt Leinart). Losing the Heisman does not force you to take a step back either. Like winning American Idol, it’s not a validation that you’re truly the best in the nation. It’s simply a validation that you had the most compelling story in the nation. The person who didn’t win often ends up doing better than the one who did.

Sometimes the best contestant wins and sometimes the one that fits the narrative voters want wins, whether you’re talking about a televised karaoke contest or a college football award show.

The Heisman Trust doesn’t want to hear that. They want to think their award is deserving of glory, devotion and loyalty from its audience. That’s why they decided to extend the broadcast from a mostly-insufferable sixty minutes to the completely-insufferable 90 minutes this year. You can almost hear the gears turning. “If we add more time to the show, it’ll give off an air of decadence and excitement. People will have to tune in to see their heroes as they wait in breathless anticipation of the announcement.”

That works for the Academy Awards because what comes after all that filler is something audiences cannot wait to get to. They’ve spent months debating and analyzing and trying to figure out who’ll win. Since the Heisman Trust doesn’t seem to want us to do that (by removing public voter ballots), we’re more than happy to oblige them. We just don’t care enough anymore to sit through it. It’s simply not worth it.

Instead, the Heisman Trophy thinks it’s the Oscars and decided to whittle away all of the interesting subplots and stories. It invited the bare minimum of players. It looked at the ballots and decided only three players were deserving of the honor to even be associated with their grand foundation, niceties be damned. It assumed, incorrectly, that its value would overcome any perceived shortcomings or slights.

And in the end, the Heisman Trophy suffers for all of this short-sighted, high-minded thinking. It’s becoming just another college football trophy in a sea full of college football trophies. If they change nothing, The Heisman Trust hopefully won’t be surprised to see interest in their ceremony evaporate further. However, if they actually take a moment to realize they are not in possession of the golden goose they think they have, they might actually realize just how much they’re stiff-arming the Heisman Trophy towards irrelevancy.