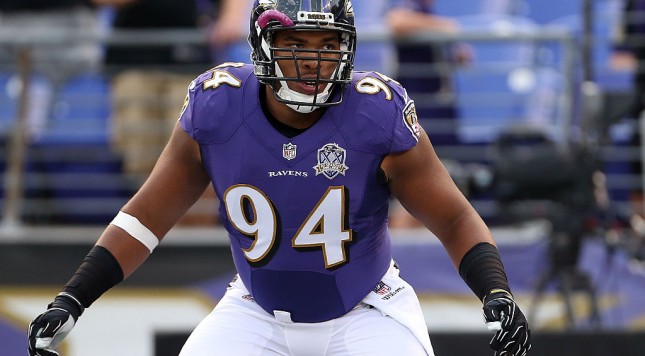 Baltimore Ravens’ rookie nose tackle Carl Davis tweeted a photo of a rookie dinner with a tab of over $11,500 Monday night, and that provided a cue for plenty of websites to discuss the tradition of hazing rookies by having them pick up big dinner tabs. One of those websites was the Ravens’ own, which prompted Ryan Glasspiegel of The Big Lead to blast them Tuesday morning both for sharing Davis’ tweet (with “The rookies got saddled with quite the bill at team dinner”) and having staffer Ryan Mink write an article promoting the idea. Since then, the Ravens have deleted both the tweet and the story, but its cached version can be found here. Here’s the key part:

When I was a rookie here at the Ravens in 2009, I had to perform a skit at our department Christmas party. Eh, not too bad.

Defensive tackle Carl Davis got it a whole lot worse.

Hope you saved that rookie signing bonus, Carl. This is what happens when you try to feed a bunch of 300-pound defensive linemen.

Mink’s article isn’t quite factually correct there, as the $11,561.52 figure is with the 20 per cent suggested tip included, but it doesn’t seem that particularly offensive either, unless you have strong feelings on rookie dinners. For context, Davis is making over $700,000 this year; even if he did have to pay this tab alone (which isn’t clear from the tweet), it’s not going to bankrupt him. Whether rookies should have to buy dinners for older and better-compensated athletes is a matter of opinion, but it’s not necessarily a clearly abhorrent practice.

If anything, though, this story shows the tough line team and league websites (and Twitter accounts) are trying to walk. They want to feature content that’s more interesting than just basic facts, press releases and play by play, but sometimes their attempts to do that draw much more criticism than they’d ever receive for bland content. (See the series of NFL players ripping NFL.com reporters.) Moreover, it’s much more notable for a story like this to appear on the team website (and thus, be theoretically endorsed by the organization) than to just pop up in other media outlets. Deleting the story and the tweet in question is odd, but the Ravens probably figured this just wasn’t worth the trouble. In some ways, though, they might have been better just to leave it; a team deleting a story and a tweet following criticism is more interesting and newsworthy than that criticism alone.