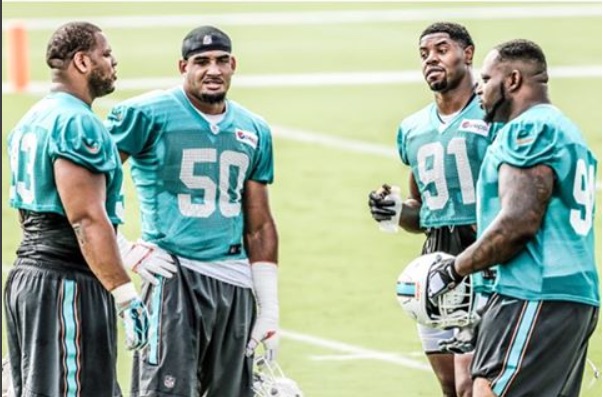 The Miami Dolphins are a mess. Coaches are getting fired left and right, and star players—really big-ticket star players—are calling out reporters on social media. Seriously, a mess.

Ndamukong Suh went after NFL.com report Ian Rapoport for his report that Suh told the Dolphins defense they better shape up or they will be gone. From NFL.com:

“I’m told he told them: ‘I run this defense, I’m going to be here for the next five years, there is no guarantee any of you will be as well. Only a handful of guys are good enough to play with me right now,'” Rapoport said. “He also said the schemes were not good enough, the techniques were not enough and everyone needed to be better, he said ‘follow me.'”

Rapoport reported that some in the Miami locker room saw this as the kind of accountability and leadership needed right now in Miami. Others thought it seemed misplaced. Clearly, Suh didn’t take kindly to Rapoport’s report (never gets old) with two IG posts calling the reporter out.

The hashtag #IanRapoport is a nice touch, but it’s not as if Rapoport’s report would be completely fabricated. If Suh has issues with anyone, it’s the person or persons who tipped off a reporter to his rant. What Rapoport reported is completely fair, and there’s little reason for Suh to go after someone for that. There are far more reasons to blame the media for losses, but this doesn’t seem like much.

And maybe it’s not. After all, Suh’s two IG posts averaged around 3000 likes, less than a picture of him literally standing next to a post for James Bond.

Thanks to @007 for the advanced screening of #Spectre! ~Suh…