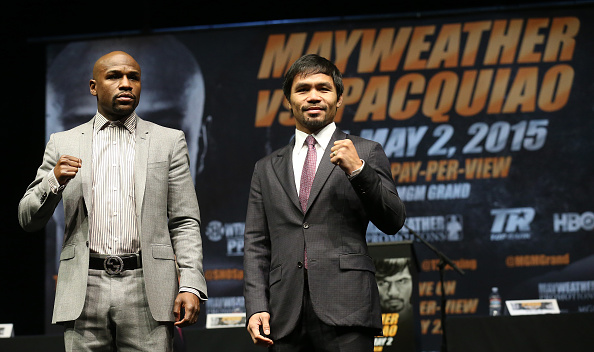 This past weekend, HBO and Showtime aired separate documentary shows that marketed Floyd Mayweather vs Manny Pacquiao, the superfight due up on pay-per-view on May 2; given each network’s fierce allegiances, it might’ve been for the best in a bout that remains riven by fault lines that prevent tickets from even going on sale to the public. What it wasn’t so good for was a solitary, unified version of the whole story.

In other words, if you’re the kind of person that only tunes into boxing periodically, and you don’t know much about Mayweather, Pacquiao and Mayweather-Pacquiao, you kinda have to watch both to get sense of each man and the fight itself. Which is just tremendous for the accessibility of a sport that rarely visits the broader public spotlight, to make potential viewers have to work, right?

As expected, Showtime focused on Mayweather, who has a deal with that network, and HBO focused on its fighter, Pacquiao. The slightly more complete picture came from HBO’s doc, “At Last,” which ran an hour as opposed to a half-hour from “Inside,” and could at least draw on archived footage of the days when Mayweather used to be the focus of its “24/7” program.

With a broader cast of characters, more material to draw from and the extra length, HBO had a built-in advantage. It also had the advantage of having done this longer: HBO had been doing these kind of promotional/documentary products well before Showtime ever did, and the polish — the cinematography, the script, everything — was superior.

You could watch “At Last” and get a better overall sense than with “Inside” of both men’s career arcs, why the fight hadn’t happened and how it eventually came to be. You might also end up with the view that Mayweather, who plays up his villainous side as much as anyone in sports, was Darth Vader — the footage from HBO was selected, apparently, with an eye for the most dismissive things Mayweather has ever said about Pacquiao, from talking about how “things are f*cked up over there” in the Philippines, to his griping about Pacquiao being considered the top fighter of the past decade. If Mayweather had any other side than a villainous side, you wouldn’t get much of an impression of it from the HBO show.

Pacquiao comes off pretty good in “At Last,” but at least the program didn’t flinch from his knockout loss to Juan Manuel Marquez in the not-so-distant past. “I truly believed he was dead,” Michael Koncz, a Pacquiao adviser, said.

Meanwhile, the Mayweather program depicted Mayweather for the most part as he has wanted to be portrayed — a rich guy who’s awesome at boxing and is surrounded by “yes men” who applaud him delivering routine lines in a commercial. “I done a helluva job,” he said, about reading the words “Order Mayweather vs Pacquiao now,” adding, “I’m quick with a teleprompter.”

If there was a unifying link to both the Showtime and HBO products, it was an emphasis on each man’s early careers, a surprisingly untapped area for this kind of program to mine. Anyone who knows much of anything about either fighter knows that Mayweather lives a hip-hop fantasy lifestyle and has a difficult relationship with his dad, while Pacquiao is a congressman in the Philippines who as a youth sold cigarettes on the streets of General Santos; this kind of thing bears repeating for the general fan who might not know these things.

But as the voiceover for “At Last” stated, “To truly appreciate where we are, let’s start again, at the very beginning…” While the archival young Mayweather has the vocal rhythms and confidence of the man we know now, Mayweather demonstrates a surprisingly humble side about his Olympic past, in both the past and then the present: “I think that I don’t really want to say I won a bronze medal. I say I received a bronze medal. You can’t win a bronze medal if you lost.”

That contrasts a little with the most damaging moment of “At Last,” where, as Pacquiao trainer Freddie Roach talks to his fighter, he contends that Mayweather’s losses an amateur matter as much as Pacquiao’s losses as a pro. Nah, Freddie. You can pick apart Mayweather’s record, but if you have to go back to his amateur career for inspiration, the well is dry.

Still, in the end, the HBO show has the most sweep, the most riveting moments, the one that sells the fight best (in part because their guy is the underdog, a more dramatic story to tell) — the one that if you had to pick between the two, you should watch. It’s got Roach saying, “This means more to me than any other fight in my life.” It’s got HBO’s Jim Lampley saying, “The universe wanted this fight to happen,” referring to oddly determinative encounters between Roach and a waiter, and another between Mayweather and Pacquiao at a Miami Heat game. It has the grandiose conclusion that Mayweather vs. Pacquiao allows us to “embrace a world where there’s always something to fight for.”