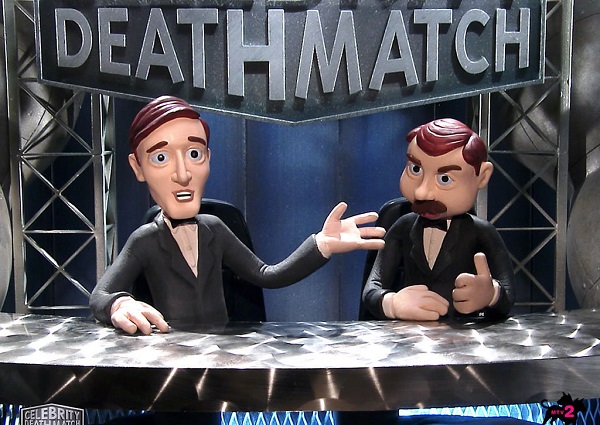 These days, celebrity feuds often play out on social media and maybe still in traditional media. But there was a time that if you wanted to see Britney Spears and Christina Aguilera or Burt Reynolds and William Shatner settle their differences, you could do so — via Claymation — on Celebrity Deathmatch.

Obviously sensing the need for us to see celebrities take each other on in the ring and beat their rivals by any means necessary, MTV is reviving the show, which ran on the network from 1998 to 2002, and then again from 2006 to 2007. According to The Hollywood Reporter, the new version will run on MTV2, which has ordered a pilot episode for the series.

Creator Eric Fogel said the new Celebrity Deathmatch will be a similar show to the one we remember, with figures from current entertainment and pop culture, but “re-imagined” for a world of Twitter spats. Presumably, this means that these battles will still take place in Claymation — which was part of the appeal of the original show — rather than some sort of computer animation. Maybe the show would look better animated digitally, but the “splats” and caricatures just wouldn’t be the same.

If you’re unfamiliar with Celebrity Deathmatch (here’s a list of previous episodes) or just want to refresh some fun memories, here’s a match between Kid Rock and Eminem.

It’ll be nice to see Johnny Gomez and Nick Diamond back at ringside in their customary fight night tuxedoes. Much like Jim Lampley and Larry Merchant brought a sense of significance and spectacle to a big-time fight, so do Gomez and Diamond. Hopefully, the two have stayed sharp during Celebrity Deathmatch‘s seven-year absence from the airwaves.

Will Mills Lane once again be the referee for these superstar slugfests? The legendary boxing ref was a key part of the show, kicking off the matches with his trademark “Let’s get it on!” (The real Lane originally supplied his voice for his animated doppelganger, but after suffering a stroke in 2002, Chris Edgerly played the role with Lane’s approval.)

There was always something reassuring about Lane saying “I’ll allow it” when one of the combatants wanted to employ a foreign object or some other sort of weapon. Even if such tactics seemed like they were against the rules, approval from Lane made it feel all right. He’s our referee, the man we would want officiating any bloodmatch with a hated adversary.

No word on when the new Celebrity Deathmatch will air on MTV2. Fogel and his crew presumably need some time to design the characters and animate the bouts in clay form. Let’s just hope it’s soon. Is it too much to hope that we’ll be seeing Katy Perry taking on Taylor Swift or Shaquille O’Neal versus Dwight Howard in the ring by the upcoming fall?