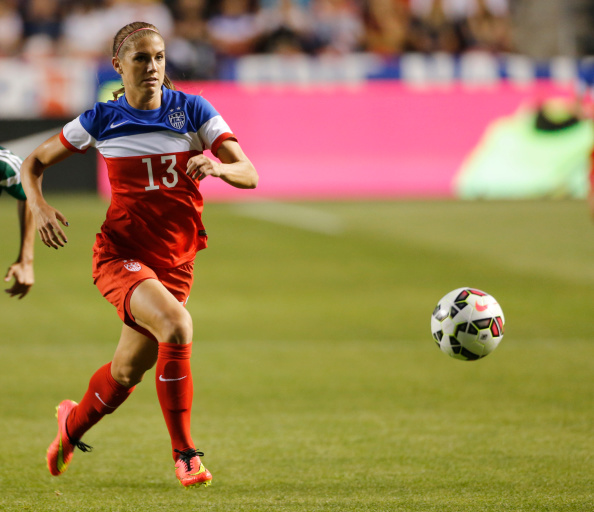 Female athletes are often judged on their looks as well as their play, which carries a whole host of issues, but it’s perhaps particularly bad when their sport’s official website is the one doing the judging. That’s what happened with a FIFA.com article on U.S. striker Alex Morgan published Tuesday, which opened with “Alex Morgan is one of the most popular players in USA women’s football. A talented goalscorer with a style that is very easy on the eye and good looks to match, she is nothing short of a media phenomenon.” FIFA’s taken plenty of flak over that, as they should, and it may be further evidence in the long list that the organization doesn’t properly care about or support the women’s game; remember, embattled FIFA president Sepp Blatter even once infamously suggested female soccer players should wear “tighter shorts.” However, as Sean O’Leary noted on Twitter, FIFA is far from the only organization to start profiles of Morgan this way:

CNN wrote this about Alex Morgan in February. But sure, let's get outraged about FIFA saying she has "good looks." pic.twitter.com/6uQuzhG114

That CNN article, which was published in February and based around an interview with Morgan discussing her appearance in Sports Illustrated‘s Swimsuit Issue, is much more focused on her looks than the FIFA.com piece. It’s far from the only one, either; consider all the beauty-focused interviews Morgan has given to outlets like PopSugar, BridalGuide and SheKnows. If it was just discussing her looks that was problematic, these pieces would certainly qualify for that. However, the audience of each piece is worth considering, as is Morgan’s participation. Those pieces are not just gushing over Morgan’s conventionally-attractive looks; they’re talking to her about her appearance, how she achieves it (in the case of the latter three), and the struggles she’s had with body image over the years (in the case of the CNN piece). It’s also worth noting that none of those are sports pieces, and that Morgan has frequently spoken about how she wants to use her looks and her popularity to bring attention to her game and her team.

So, if Morgan’s fine with people talking about how she looks, and if she’s fine with playing that element up, what’s the issue? Well, from this corner, the problem is when sports media and sports organizations start emphasizing female athletes’ appearance over their play. Consider the way Morgan has been built up, and how that contrasts with fellow American striker Abby Wambach, whose appearance and sexuality are much less conventionally admired. Jake Toffler wrote a fascinating piece on Duke’s Soccer Politics site about the contrast in the coverage of the two:

A picture is worth a thousand words and a simple Google Image search tells the whole story. A search for Abby Wambach reveals action shots of a fierce competitor mixed in with a heavy dose of American patriotism. A search for Alex Morgan, however, results in a slew of sexualized photos, many of which come in the form of bikini photo shoots.

In an interview with Will Tidey, Alex Morgan talks about how she is portrayed in the media. “There are always female athletes highlighted for their sex appeal—that comes with any other female team. I have done Sports Illustrated, but I don’t regret it because it portrayed me in a positive way—as an athlete.”

Abby Wambach is openly gay. She is married to fellow soccer player and National Women’s Soccer League teammate Sarah Huffman. As a result of her homosexuality, Wambach is often portrayed in the media as masculine. While some of her popularity may be a result of fellow homosexuals admiring her strength to be an openly gay athlete, a large majority of it stems from her on-field success. …

As of this writing, Abby Wambach has a shade under 500,000 Twitter followers. Alex Morgan has over 1.5 million, over three times as many as Wambach. While it’s possible that there are some confounding factors, perhaps Alex Morgan is more active or simply a more interesting follow, her outward flaunting of her sexuality most certainly plays a large role in her popularity. A popular phrase in the advertising industry is “sex sells” and this case is no different. Abby Wambach and Alex Morgan are both extremely successful footballers but Morgan has capitalized on her sexuality in combination with her skill, whereas Wambach has only focused on the latter, allowing Morgan to become one of the most popular female athletes in the world.

The takeaway isn’t that Morgan should be condemned for using her looks to enhance her brand and her appeal. It’s her life to live as she pleases. If Morgan’s willing to pose for Sports Illustrated’s swimsuit issue and talk beauty tips, more power to her, and it’s not surprising that entertainment and beauty-focused publications are interested in that. We’ve seen this on the men’s side as well with stars like David Beckham and Cristiano Ronaldo. Some of Morgan’s popular success has definitely helped grow women’s soccer, too, which benefits more than just her.

The issue arises when sports media, and sports organizations like FIFA, start factoring appearance into their pieces and into their coverage decisions. Ideally, the sports world wouldn’t care about an athlete’s looks; as Sarah Spain put it at Blogs With Balls this year, “I think you can click on two buttons, one for sports and one for porn, and I don’t think they have to be in the same place.” That’s not how the current world works, though, especially on the web side, where female athletes deemed to be conventionally attractive receive more coverage than less-conventionally-beautiful fellow competitors who might actually be more skilled. Consider the case of Leryn Franco, who has never placed better than 34th in an Olympics, but has posed for SI’s Swimsuit Issue and is probably the most widely-known female javelin thrower out there.

Morgan is not Franco; she’s one of the best players in the world in her own right, as her 2012 Ballon d’Or nomination proves, and she’s a critical part of this U.S. team’s success. Having her looks come up so frequently in sports pieces somewhat trivializes what she’s accomplished on the field, though. It’s not that Morgan’s looks are off-limits, especially when she wants to discuss them and when she’s doing so with a publication that normally wouldn’t be covering women’s soccer. It’s that there’s no particular need to keep discussing them in pieces that should be about what’s happening on the pitch. That’s true for media outlets, and it’s perhaps particularly true for FIFA.com. Articles like this certainly don’t help with the perception that FIFA is sexist, and the official site of this tournament should be above talking about the looks of its participants.