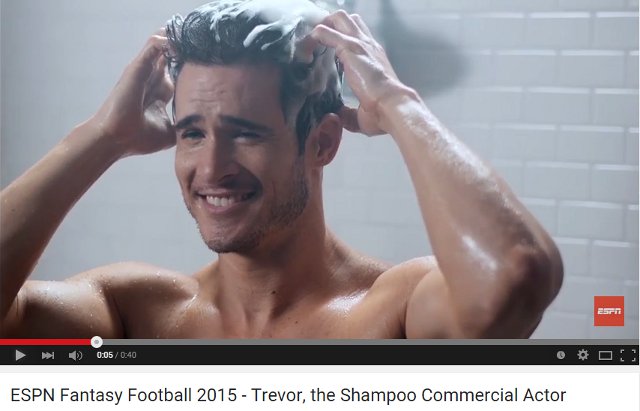 Many commercial tropes have become so recognizable that they’re being imitated in the sports world (see Ole Miss basketball coach Andy Kennedy channelling DirecTV pitchman Rob Lowe last week), but ESPN’s taken things a step further in their latest ads for their fantasy football leagues, creating interconnected commercials with fake actors who star in fake commercials trash-talking each other and discussing the importance of being the commissioner in their actors’ (fake) fantasy league. This is meta enough to approach the level of “ABED, filmmaking beyond film.”  Here’s the first one, featuring Roger, the allergy medicine actor, who’s complaining about Jeremy, the restaurant commercial actor:

Next, here’s Jeremy complaining about Trevor, the shampoo commercial actor:

And to close the loop, Trevor complaining about Roger:

We then see the three actors at their draft, with “softer than the footballs in Foxboro” Roger breaking down when his quarterback plan fails:

While this sounds like a bizarre concept at first, it works pretty well in practice, and having these ads be so closely connected’s a good way to get people to watch all of them (and thus, have ESPN fantasy embedded in their mind). What’s also interesting here is that while two of the slams in here (the Seahawks’ goal-line decisions and Darren Sproles being short) are jokes at teams or players, the third references NFL scandal Deflategate. Granted, it’s not exactly mocking “The Shield” (which is much better as a TV series than a term of reference for the NFL) or Roger Goodell, but it is still pointing at one of the NFL’s more embarrassing moments lately, something that you might not expect in an ESPN ad given their recent parting of ways with NFL critics Bill Simmons and Keith Olbermann. At least the fantasy ads can still mock the NFL a bit?

On the whole, this seems like an effective campaign from New York agency Wieden + Kennedy, and a good way to get more discussion of ESPN’s fantasy brand started. It’s taking something many sports fans are talking about (terrible commercial tropes, which often seem particularly present in the commercial slots during sports programming), it’s presenting them in an interconnected way to get people to watch, it’s doing so with humor, and it’s subtly talking about the benefits of ESPN fantasy in the process. As AdWeek‘s Tim Nudd wrote, “Critics will complain that these are just ads for ad people. But really, isn’t everyone an ad person these days—particularly ESPN’s young male target?” Indeed.