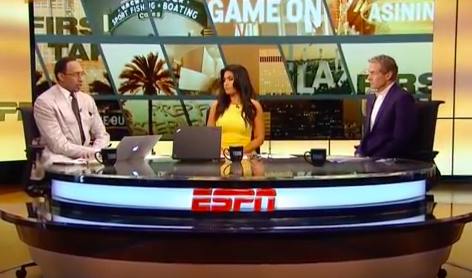 There are a few things that I would not wish on someone, even my worst enemy.  Getting stuck in an hours long traffic jam when you have to use the bathroom.  Burning the roof of your mouth on a piece of pizza that’s way too hot, but is too good not to eat.  Paying good money to watch the fourth NFL preseason game.

But what’s at the top of the list?  Sitting between Skip Bayless and Stephen A. Smith for two hours every weekday.

After Jay Crawford and Cari Champion earned their release from ESPN’s Shawshank to move on to the greener pastures of SportsCenter, it’s now Molly Qerim’s turn to try to endure the struggle.

Qerim, who had served as an interim host throughout the summer, was just named to the job on a permanent basis.  Qerim will also appear as a contributor on Mike & Mike (which seemed to be the original plan for her at ESPN before that show’s planned move to New York was canceled) in addition to her First Take duties:

Molly Qerim, who rejoined ESPN in July 2015 as interim host of First Take, has been named full-time moderator of the show. Later this month, she will expand her profile with a role as a contributor to ESPN Radio’s Mike & Mike weekday morning program that also airs on ESPN2, where, during the final two hours of the four-hour show (8 – 10 a.m. ET), she will present a variety of content including news and breaking news updates. She will also focus on the hottest trending topics on the sports social scene and will host a short segment late in the show highlighting the segments coming up on that day’s First Take program.

First Take is televised daily on ESPN2 from 10 a.m. – noon, immediately following the simulcast of Mike & Mike. Qerim works with Skip Bayless and Stephen A. Smith who discuss the notable topics of the day. Mike & Mike, now in its 16th year, is hosted by Mike Greenberg and Mike Golic.

“Molly is smart, resourceful and engaging,” said Marcia Keegan, ESPN vice president, production, who oversees First Take. “From day one, she has worked hard, been very prepared and is always asking for more information. She’s a team player who collaborates very well with Skip and Stephen A.”

Qerim stated, “I’m ecstatic to continue working with Skip and Stephen A. and look forward to contributing to Mike & Mike. These gentlemen are some of the best in the business. It’s an honor be on their team and back home with ESPN.”

As far as nightmare jobs go, being the moderator of First Take is right up there.  Between having to endure Skip Bayless’ carnival barking and playing a professional wrestling villain and Stephen A. Smith’s wisdom on social issues, that’s enough to make me want to do a Gus Frerotte into the nearest concrete wall.  Oh, and the best part is that your job is to explicitly not express an opinion while the two biggest bloviators in sports “Embrace Debate” and share the worst, most offensive, most mind-blowing opinions imaginable.  Who wouldn’t want to sign up for that!!

Alas, as the cliche goes, it’s a dirty job and somebody has to do it.  Let’s just hope her stay in ESPN Purgatory is a short one and there’s a nice promotion for her in due time.