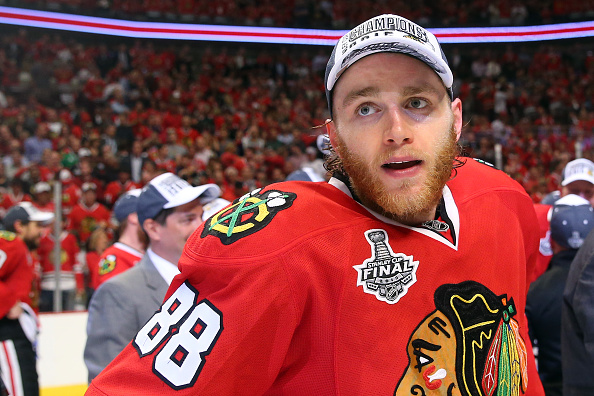 The Buffalo News is under fire for “irresponsible journalism” in their coverage of the rape allegations against Chicago Blackhawks’ star Patrick Kane, and that criticism is about an unusual aspect of the coverage; quotations they chose to run. Here’s the key quote in question, from Mark Croce (who owns the nightclub where Kane was drinking before the alleged incident on Saturday, Aug. 1), who spends a lot of time talking about how Kane wasn’t noticeably drunk and then goes on to describe a woman’s interactions with him:

Croce told The News that he and several of his employees noticed a young woman “hanging all over” Kane at SkyBar for at least two hours that night, putting her hands on his arms and “being very forward, very flirtatious with him.” He said he does not know the woman and does not know her name.

“It was almost like she stationed herself near him and was keeping other women away from him,” Croce said. “I noticed it and kind of laughed about it.”

Brian Moritz, an assistant professor of digital and online journalism at the State University of New York – Oswego who runs the Sports Media Guy blog, writes that running that quote is “bullshit” and victim-blaming:

It is utterly and totally irresponsible for The News to print this information. Even as the reporters hedged their bets, saying they could not confirm whether it was the same woman or not, there is no place for those paragraphs in any news story about any rape case.

What those paragraphs do is victim blame, pure and simple. It sets the table for the nauseous defense that the victim was asking for it. That she led Kane on. That there couldn’t possibly be any rape because she was all over him.

That quote in today’s story – that’s an example of rape culture. It’s pervasive, especially in the hyper-masculine sports world. And it’s got to stop. And it doesn’t stop with women learning how to behave. It stops when men learn how to behave.

Moritz’s full post is well worth reading for the extra context and nuance he provides (he talks about the good reputation of the paper and these particular journalists, and why they might have chosen to do this), but his above criticisms are spot-on (as is his note about how the News can’t confirm if this is even the women in question in the Kane case, which further adds to the case not to run Croce’s account).  Moreover, there’s a source agenda to consider here, as Alan Bedenko of dailypublic.com notes (after his own well-made argument along the lines of Moritz’s): Croce could have a financial stake in the outcome of this case, both from potential liquor law violations and from Kane’s planned visit to his bar with the Stanley Cup that was cancelled after this story broke:

To hear Croce tell it, he’s vomiting up his speculation to the News — which is dutifully transcribing it — to ensure that everyone knows that Kane wasn’t drunk.  Why would that matter?

It matters because he doesn’t want the authorities or the victim to come after SkyBar for any liquor law violations or “dram shop” liability. Specifically, under New York law, if a bar serves an obviously intoxicated person who goes on to injure some third party, that injured third party may sue the bar for money damages. Croce is covering his own ass here, and the News didn’t even comment on his motive to provide these speculative details to its reporters. I mean, let’s just start the portrayal of Kane’s accuser as a whore-who-had-it-coming so that she thinks twice about suing SkyBar.

The thinking here is as misogynist as the host on WBEN who also jumped to the conclusion that Kane’s accuser is a lying gold-digger. He’s very concerned that Kane is being portrayed as “guilty of rape” (I haven’t seen that, so who knows what he’s talking about), so Croce figures he’ll denigrate Kane’s accuser by telling the Buffalo News all about the girls hanging all over Kane at the bar.

Not only do we not know if this was the same girl accusing Kane of rape, but being a flirt at a bar doesn’t give anyone the right to commit a rape later on.

Also, Croce is being duplicitous when he says he has “no skin in the game”.

…Having Patrick Kane bring the Stanley Cup to your bar, and then canceling due to a rape allegation, is Croce’s “skin in the game”.

Both Moritz and Bedenko make excellent points about how the News erred in this instance, and their pieces are well worth reading in full. There’s a larger issue to consider here that goes beyond Buffalo and Kane, though. Direct quotations are a unique part of journalism; they’re not necessarily the opinions of the reporter or columnist, and they’re not always possible to evaluate as factual or not, so they don’t usually take as much flak as outright opinions or factual errors in the non-quotation parts of the copy. However, as this story shows, it’s vital for reporters and papers to think about whose words they’re printing, why they’re printing them, and the possible effects of those words. That’s not just from a journalism standpoint, either, as there have been plenty of legal cases involving papers relaying a problematic quote.

The Croce case is particularly interesting, as it involves a few conflicting journalistic ideas. On the one hand, the rape allegations against Kane are very much news, and they’re news on a national scale. There’s an understandable desire for the News and its journalists to get details others don’t have. Kane’s activities earlier in the night are also potentially newsworthy, and eyewitness accounts of his behaviour on the night in question may be as well. Those accounts would seem more newsworthy (and thus, more worth printing and spreading to a wider audience) if they involved an opposite scenario to the one Croce’s describing, though; if Kane was visibly intoxicated and still being served, that could open the bar up to a lawsuit (as Bedenko notes). Even in that case, printing those wouldn’t be an easy call, though, as that might give Kane or the bar grounds for a lawsuit against the paper. The reliability of the source would have to be carefully considered, as would the benefits versus the risks of printing. In the existing case, though, there was very little reason to run Croce’s comments; the slight (if at all) news value of them is drastically overshadowed by the source bias and the potential agenda, and spreading his comments to a wider audience is not beneficial. As Moritz notes, it’s actively harmful from a standpoint of perpetuating rape culture.

Direct quotations don’t often receive as much scrutiny as printed facts, but both journalists and readers should look at them closely. The key question is Ravilla’s old Latin phrase “Cui bono?”, otherwise known as “Who benefits?” It’s why the anonymous league sources need to be greeted with some skepticism, and why many journalists really do need to do “a better job of vetting.” In the case of the News, they printed questionable commentary from a highly-biased source with the potential to advance his own agenda, they didn’t even mention that source’s biases, and they didn’t achieve any great news value by doing so. Those are big mistakes, and hopefully ones the rest of the journalism world can learn from.