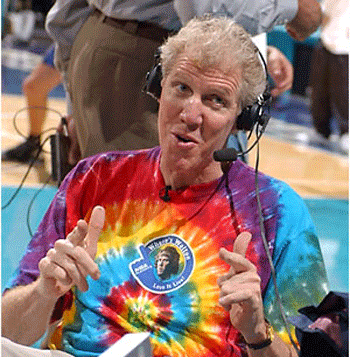 Watching a basketball game with Bill Walton as one of the announcers is an experience unlike any other. Walton is simply one of a kind and when I saw his name pop up on Reddit’s IAmA site as an upcoming guest, it definitely piqued my curiosity.

On Thursday afternoon, the legendary Bill Walton took part in a Reddit AMA and here are the most intriguing questions and answers…

Question: What is the story behind being milked?

Walton: It’s the most pleasurable experience in the world! When you’re on a great team and you get hot, your teammates milk you dry – they wear you out and there’s nothing like being on a great team. When you’re on a bad team and you get hot, they freeze you out because they figure they have to get theirs before the game’s over. Never forget – happiness ends when selfishness begins. I love being hot and there’s nothing in the world like being milked.

Question: Mr. Walton, first off thank you for doing this AMA. During an Oregon-USC broadcast earlier this year you called Michael Jordan ‘average’ & later went on to say that he is not a top 3 player of all time. I was curious who in your opinion are the top 3 players of all time?

Walton: I did not call Michael Jordan average, I said Michael Jordan is average size, strength, speed, and jumping ability. The top 7 players of the history of basketball in chronological order are Bill Russell, Wilt, Oscar, Kareem, Larry Bird, Magic Johnson, and Michael Jordan. I have no problem with you disagreeing with what I say, but please make sure it’s what I say, not what you think I said. When everybody thinks alike, nobody thinks. It’s ok to disagree, just don’t be disagreeable. I’m all about peace and love, I’m about freedom and independence, I am about freedom of choice. I stand behind what I say. I believe what I say and I speak from the heart.

One of the problems in mass communication is that when somebody will come up to me and say “Bill, my brother’s father’s nephew’s cousin’s mother in law’s maid’s, gardner’s postman said that you said that they heard from the grocery store clerk that you said this about that”, it all gets very confusing. Just listen to the music play and please challenge me on what I say, not what you think I said or what somebody else told you about what they heard about what somebody else thought they heard. Or maybe you should ask that guy “Dave, right?” Bc he’s sitting right there and he didn’t hear it either.

Question: Have you ever been to a volcano when its erupting?

Walton: We were on tour with the Grateful Dead in Oregon. They were playing the show and they start playing Fire on the Mountain. The volcano next door, Mt. Helens, blows up. When the show was over a bunch of us raced to the airport and boarded a plane. We told people at the airport we were scientists studying atmospheric conditions and the effect of smoke and volcanic explosions on the human spirit, so the pilot was terrified, but we convinced him to fly right into the smoking crater with fire and lava everywhere. He wanted to go home but we were on a scientific mission and we kept getting closer and closer. As we were flying around inside the erupting volcano, the military jets scrambled from the local base and come up there to get us out of there. It was a real dogfight but we had the spirit Cortez on our side. We eventually left and when we landed at the airport the pilot was most relieved as we quickly fled and went back to the rest of the tour.

Question: Who were your favorite players to play with/against?

Question: What was the biggest moment of your career?

Walton: The greatest moment of my basketball career was when I beat Kevin McHale 1 on 1 in front of the entire Celtic family in June of 1986….I should’ve played him for his number the day I got there.

Question: Is the Solar Teepee your man cave? Where might I acquire said teepee? For a friend…….

Walton: I love my teepee, I love my bike, I love Cortez, I love my jacuzzi, I love Lori. You can always come check our teepee out – never a problem, but if you want your own, go to tipi.com. As for my great friend Jeb, tell him you’re a friend of mine. Open your heart, open your mind, open your spirit and soul, and let the sun shine in. I am a human solar panel. I love my teepee – I used to live in it until I married Lori. Her idea of camping is when the Ritz Carlton goes to a limited menu at 4am.

Question: What is your opinion on paying college athletes?

Walton: I’m for anything and everything that helps the quality of life of the players, the people that are creating the product, and there has to be a modernization of everything. Focus on the quality of the product that encompasses the players receiving adequate consideration for their efforts and contributions. That includes the value of their scholarship, the quality of their life and the rules, restrictions and limitations that they live, play, and work under. Those rules should be standardized across the board for everyone involved in the business of sports, including administrators, executives, coaches, employees and players. Let’s make it real, fair, current, let’s make it modern, and authentic. We’re all in this together.

Question: What was it like to have your hair catch on fire in Little Nicky?

Walton: It was easily one of the most exhilarating moments of my life and I rank that right up with the night that Adam Sandler at Neil Young’s Bridge School concert personally sang “The 7 foot man” to me and 30,000 of my closest friends.

I peaked when I was 17 years old at 6’11. That night with Adam and Neil at Shoreline was right after my spine surgery 6 years ago. When Adam and Neil were singing, that’s the closest I’ve ever been to 7 feet tall. Thanks for making me stand tall and proud on your side.