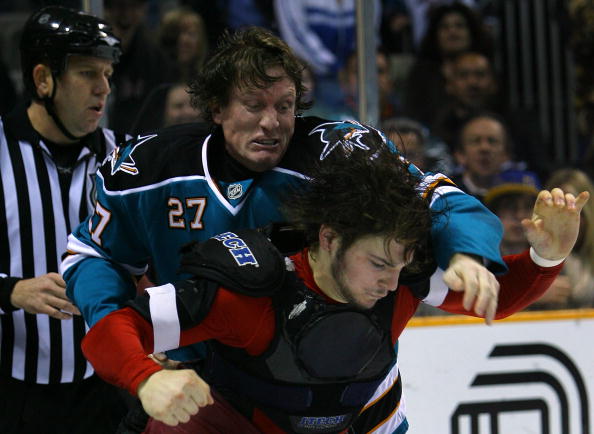 NHL Hall of Famer and NBC analyst Jeremy Roenick has been known for some wacky stunts over the years, from arguing with Patrick Roy through the media to telling fans to kiss his ass to being caught in a gambling ring investigation to appearing in a variety of TV shows, but his latest one might just take the cake. From Philadelphia sports radio 94WIP’s Rhea Hughes (via Yahoo’s Josh Cooper), here’s video of Roenick jumping on a live alligator during a golf outing:

But what led to this? Well, Roenick joined The Dan Patrick Show Tuesday to discuss his foray into alligator wrestling:

Here’s the key part of what he had to say:

“I was down in Bay Hill [one of Arnold Palmer’s golf courses, located in Orlando, Florida), as a member’s guest—by the way, I met Arnold Palmer, one of the coolest things I’ve ever done—playing in a golf tournament, hanging out. I don’t play golf in Florida very often, but I’ve been known to do stupid things, pick up rattlesnakes, grab them, chase my caddies with them down the fairway. So I saw an alligator, and I said, “Hey, listen, let’s see if we can get close to it.” The first day, I didn’t get that close to it. The second day, which is the video that you saw, I actually got my hand on its tail. But I didn’t think of what would happen if I actually got ahold of him, which is probably a good thing. But I always act first, think later. …It was about seven feet, a big one. Probably not one of my smartest decisions in my lifetime, but one that obviously has created a pretty big conversation piece; I’ve gotten calls from four different continents, people saying ‘What is totally wrong with you? You’ve definitely lost a bunch of screws.’ But we already know I have no screws.”

Roenick said the video’s from the first day of the tournament, last Thursday, and that he looked for the alligator to try wrestling it again the next two days, but didn’t have success.

“The first day of the tournament, I almost got it, so the next two days I was looking for it, and it’s in the middle of the lake, so I’m like ‘That’s his habitat, I’m not going in there, not a chance I’m going in there.’ He didn’t come back to the side, so he must have known I was lurking around.”

Roenick said when Palmer found out, it reinforced his beliefs about hockey players.

“His suspicion of hockey players being out of their minds has been totally affirmed.”

Roenick said he realizes this wasn’t smart, but opted to do it anyway.

“It was dumb, it was stupid, it was funny, it was entertaining, and I’m sure it’s not the last time I’ll do something stupid like that again.”

He said it’s not the dumbest thing he’s ever done, though.