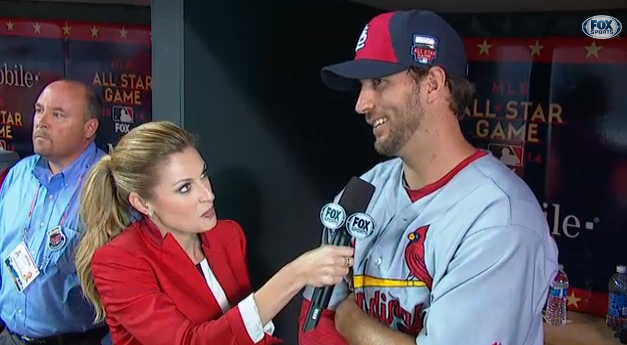 Unpacking this “controversy” (I hesitate to use that word because that would give this entire thing much more credence than it’s worth) is a mind-numbing exercise in stupidity.  It represents everything backwards about MLB giving some tangible value to an exhibition game when nobody else does.  It represents the blind mythologizing of an active player above everything else, including this joke of a game that does and doesn’t mean anything.  And it represents the media being willing enablers in giving someone a free “get out of jail free card” to preserve their preferred storyline, the blind mythologizing, at all costs.

Let’s start from the beginning.  Derek Jeter doubled in the first inning off Adam Wainwright.  In the long and revered tradition of Chan Ho Park and Cal Ripken Jr., the Cardinals pitcher admitted to reporters during the game that he teed one up for Jeter.

Adam Wainwright admitted he grooved a fastball to Derek Jeter in the first: “I was gonna give him a couple pipe shots. He deserved it."

This obviously presents a problem.  If the All-Star Game is to count for something, then it’s not a smart move for Adam Wainwright to be lobbing softballs over the heart of the plate.  After all, he has a vested interest in the National League winning the game since he could be pitching in that home or road Game 7 later this year.  But this is where the absurdity of “THIS TIME IT COUNTS” really hits home.  Because nobody aside from Bud Selig treats this game like it actually means something.  The players, managers, announcers, and fans all treat it as the mere exhibition it has been.  If the ASG really meant something, Mike Trout should not be taken out of the game under any circumstances.  It’s one of the silliest walking contradictions in sports.

But that’s not all, this story gets even more absurd when one drills down into why Wainwright felt the need to give Jeter a juicy pitch to hit as a tribute in the first place and how that factored into this becoming a thing.  After a furor began rumbling over Wainwright’s admission, he came on the Fox telecast for an interview with Erin Andrews to claim that he was merely joking.

If that was the case, how would that context have been missing in the relaying of his statement?  One would think the reporters present in listening to Wainwright’s comments would recognize whether he was joking or not, unless he possesses a drier sense of humor than Ben Stein.  That didn’t happen though.

Nevertheless, taking Wainwright at his word, the reason for needing an apology is even more mind-boggling.  Wainwright was sorry not because he jeopardized his own hopes of winning the game and therefore potentially hosting Game 7 of the World Series.  He was sorry because his admission/joke/whatever took the spotlight away from Jeter.  Seriously.

I don’t want to sound like an old fuddy-duddy, but do you think Bob Gibson would lay one out over the plate to Mickey Mantle to give him one last moment in the sun?  Would Pedro profusely apologize to Ken Griffey Jr. for not giving him the respect he so deserved?  Would any of the great competitors over the years do this?  This permeating attitude throughout baseball and the media that Derek Jeter must be a God-like figure that takes precedence over everything else is extraordinarily ridiculous.  When a Major League Baseball player’s first objective taking the mound is “kissing the rings of Derek Jeter” that should be a sign that the priorities of the sport are badly awry.  The only thing missing from last night’s production was Jeter riding a donkey to the plate with AL and NL players laying palm branches beneath him.

While Wainwright’s bizarre night was fitting of this circus, don’t overlook the media’s role in allowing it all to happen unabated.  Fox’s Erin Andrews could have pressed Wainwright with a number of poignant questions during her interview that would have been helpful to further unpack this story for viewers.

– Why did you feel it was necessary to “joke” about laying one on a plate for Derek Jeter?

– Do you feel that this game truly counts?

– Why would you make those comments in the first place?

– Why do you need to apologize to Derek Jeter?

– How ashamed are you to not uphold The Cardinal Way?

Instead, Andrews’ follow-up question was this:

Are you kidding me?  Of all the possible follow-ups, that is what Andrews chose?  The timing of this laugh-out-loud “question” couldn’t come at a worse time for Andrews considering she was just promoted at the expense of veteran sideline reporter Pam Oliver as the network’s #1 NFL reporter.  Andrews was unfairly treated in the wake of her infamous Richard Sherman interview by a number of people, but criticism for this question, or lack thereof, is certainly fair game.  Skeptics were already critical of Fox for that move, now they have much more ammunition at their disposal.

How in the world was social media involved in any of this?  How could that possibly enter Andrews’ mind as worthy of calling attention to?  Did Twitter suddenly become self-aware and possess Wainwright’s brain to cause him to give those comments?  Blaming social media as some kind of blanket boogeyman to make all of the real issues go away is quite the red herring.  Andrews’ jab at social media did nothing more but give Wainwright exactly what he was looking for – a way out that was the path of least resistance.  That’s the mark of a publicist, not a journalist.  In no way did that interview serve viewers or get to the truth of what really happened.  It served only baseball’s inherent need to do everything it can to mythologize and honor Jeter’s greatness at all costs.  In that respect, Andrews is far from alone.

At the end of the night, Wainwright, MLB, Fox, and everyone else involved at the All-Star Game got to preserve their preferred storyline.  Derek Jeter doubled in his first at-bat in his last All-Star Game, and he did so the right way.  The Derek Jeter way.  No matter whether it’s true or not, no matter whether it counts or not, that’s all that matters for baseball at the moment.  Now let the Orwellian 2014 baseball season continue undisturbed.