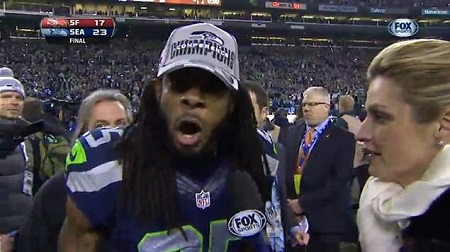 Richard Sherman calling out Michael Crabtree in a postgame interview with Erin Andrews was seen by approximately 60 million people across America as the audience peaked for the climactic ending of the NFC Championship Game.  There are few people that have ever walked planet earth that have the opportunity to speak in front of a microphone in front of an audience of that size.  That's only part of the reason why Sherman's pro wrestling promo became the major talking point of the game and not the play itself that led to the interview.

The real reason why Richard Sherman's postgame smackdown of Michael Crabtree became the major sports, and let's face it, mainstream story of the Monday news cycle was because it fed into our hunger and thirst to have an opinion about it.

Our consumption of sports in 2014 is driven by opinion and drawing reactions of passion.  Sherman's incredible play to tip Colin Kaepernick's pass in the endzone and save Seattle's Super Bowl hopes was something to be admired.  However, it wasn't something we could easily love or hate.  The postgame interview certainly was.

On one side is the crowd bashing Sherman for being a poor sport and a bad winner.  On the other side is the crowd praising Sherman breaking free of boring athlete cliches and being honest and passionate and, well, himself.  Both sides certainly have a reasonable viewpoint.  In fact, I'd argue both are true… if that's allowed by the powers that be.

But we can't stop there.  Because there's some debatable act here it's not good enough for us to let Sherman's interview be what it was, an interview.  No, Sherman's 30 second soundbyte has to define him as a human being, Stanford as an institution of higher learning, and the socio-economic fabric of greater society all in one.

Everywhere you looked on Monday, somebody had a "hot sports take" about the Sherman interview trying to carve out their own niche and somehow make their voice be heard in the overwhelming outpouring of opinion on the matter.  A few examples…

Dan Wetzel talked about Sherman surviving in the violent world of the NFL.  Bruce Arthur went the football culture route as well.

Dan Levy called it great for the sport in spite of the poor sportsmanship on display.

Deadspin raised the question of race and so did Dave Zirin.

Will Leitch was effusive in his praise of Richard Sherman: the man, myth, and legend.

Gregg Doyel says Bill Belichick is the real villain of the weekend and not Sherman.

Peter King got the sociologists' viewpoint on the reaction.

Tommy Tomlinson had not 1, but 22 thoughts about the interview at Forbes.

And most importantly, Steve Politi got the opinion of Mean Gene Okerlund.

Even Sherman himself had a column on The MMQB explaining the interview, which reportedly led to the most trafficked day in the history of the website.

Why do these moments have to take on a life-or-death importance or say something greater about society?  It's getting more difficult to enjoy multi-dimensional personalities like Richard Sherman because of the big business machine of opinion-driven news.  Once the machine gets going, it feeds off itself, spinning infinite tangential possibilities.  If you looked hard enough, I'm sure you could find a column on what Richard Sherman's interview taught us about the third law of thermodynamics and income inequality.

Everyone tried to find their own angle to cover the Sherman interview and add their opinion because they had to have an opinion.  Not just an opinion on the interview itself and whether it was good or bad, an opinion on the larger impact on sports and society.  Just do a Twitter search for Richard Sherman: My Column and see the results.  (On second thought, spare yourself and don't.)

Why are we contractually required to think that Richard Sherman's postgame interview was more than a brash, entertaining postgame interview?  Why does it have to be either the personification of evil or the GREATEST THING EVER YOU GUYS?

Because there's no room for nuance anymore.  Not everyone who wasn't fond of the interview deserves to be lumped in alongside Twitter trolls and racists.  Not everyone who was entertained by the interview is calling for the destruction of good sportsmanship and morals in society.  In the end, that polarization and the need to have two clearly definable camps of good and eviil to debate back and forth has a negative effect on how we take in sports.

The fundamental drive for opinion and being mandated to love or hate with the fury of 1,000 suns is the id of sports media and sports fandom in 2014 and the underlying reasoning as to why there were a bazillion columns published on Richard Sherman yesterday.  It's why ESPN is called to "Embrace Debate" even if it's inauthentic.  It's not just Richard Sherman.  You can fill in the names of Tim Tebow, Johnny Manziel, LeBron James, Alex Rodriguez, or any other athlete that finds themselves in the middle of a day's news cycle.  And ESPN is far from the only entity that takes part as seen by the wide range of outlets weighing in on Sherman.

Despite what the machine would have you believe, Richard Sherman's interview probably didn't cause most of the 60 million people watching to have an epiphany on sports, society, or culture at large.  Did Richard Sherman really teach us anything about America in calling out Michael Crabtree in a postgame interview that we didn't already know?  Or do we need to use Richard Sherman as a vehicle to fill our column space so we can teach America ourselves?