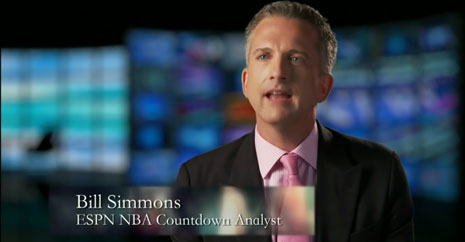 Rob Tannenbaum’s big Rolling Stone profile of Bill Simmons (and the extra quotes Deadspin published later) is an interesting read on a lot of levels. It has plenty of insight into how Simmons got to where he is today, and it also illustrates Simmons’ personality and approach. Perhaps the most notable element of the profile, though, is how it shows the ways Simmons has changed over the years, and how he’s gone from a feud-happy outsider fan to a multiplatform media mogul who’s actively avoiding confrontation.

The transformation isn’t total, and elements of the old Simmons are definitely still present, but it’s fascinating to see how his approach has changed along with his job description.

The Sports Guy to Sports Mogul shift is most obvious when discussing Simmons’ views on feuds. In his earlier days as a writer, Simmons loved taking swings at others. Consider the passage in Tannenbaum’s story about Simmons’ start at the Boston Herald:

Simmons is credited as an Internet visionary, but he went into new media only because old media rejected him. “Boston,” he says, “is where I failed.”

He began his career as a lackey at the Boston Herald, the lesser of the city’s two daily papers, “organizing Chinese-food orders” and covering high school teams. He stood outside the Herald building on the Mass Turnpike, smoking cigarettes and “wondering what the fuck I was gonna do with my life.”

Except for the addition of tall buildings, Boston hasn’t changed since Paul Revere bought a horse. TV anchors and newspaper columnists keep their jobs for decades, and at the Herald, “mediocre writers were blocking my way,” Simmons later wrote.

And contrast with Simmons’ views on that now:

“I didn’t do myself any favors,” he adds now. “I was probably too arrogant, and could barely hide my disdain for some of the writers.”

Moreover, the Deadspin outtakes include something even more notable; Simmons doesn’t want feud-prone types at Grantland.

“We have a kind of ‘no dicks’ policy. We try to hire decent people, not people who are assholes or cause trouble. We’ll look at someone’s Twitter feed and see what’s on there, and if it’s somebody who’s starting fights, I don’t want to hire that person.”

So, 2014 Bill Simmons probably wouldn’t hire late-90s Bill Simmons. That’s not necessarily wrong. For one thing, the overcritical, feud-heavy approach is a lot more common (and played out) now than it was when Simmons started.

For another thing, that doesn’t mean Simmons is creating a site that doesn’t reflect him; in fact, a lot of Grantland’s success is because it’s been able to find writers and deliver pieces that appeal to those who like Simmons’ style and approach. It’s interesting to see how his views have changed, though, and some of that may be thanks to both spending so much time as part of a big media empire and taking on new roles with everything from Grantland to the 30 for 30 documentaries to NBA Countdown. He’s seen the challenges first-hand now, which has probably made him less critical and more sympathetic.

It’s notable that Simmons hasn’t entirely backed off feuds, though. He’s still finding some in other roles, particularly on NBA Countdown. We’ve seen that before with his Doc Rivers fight, but that’s far from an exception. Consider what Tannenbaum writes about him there:

On NBA Countdown, Simmons plays a slightly exaggerated version of himself: a comedic troublemaker, “the wild card who doesn’t give a shit,” he tells me. “I’m part historian, part know-it-all, and part shit-stirrer. I don’t hold back – that’s the key.”

During a recent Countdown, he denounced Brooklyn Nets shooting guard Joe Johnson, whom Simmons has tagged as the most overpaid player in the NBA. “Joe Johnson did not deserve to be on the all-star team,” he says, so outraged and high-pitched he’s nearly yelping. “Even he had to be shocked he made it.” After the show goes off the air, Countdown host Sage Steele turns to him, shaking her head. “You,” she tells him, “are a psycho.”

The shit has been successfully stirred: Within minutes, Twitter is in flames. “Never hated a sports analyst as much as I hate Bill Simmons,” I read as I scroll through his mentions, followed by “I want to punch him in the face,” “He is such a douche” and “If Bill Simmons ever got in a car accident, I would be happy.” There are compliments, too, but, let’s face it, those are boring.

Tannenbaum goes on to talk about how Simmons no longer engages in feuds on Twitter, though, and while that’s probably smart, it further illustrates the role reversal. Late-90s Simmons was the guy on the outside snarking the performance of big media figures; 2014 Simmons is one of those big figures, and he’s purposefully ignoring most of the criticism from modern versions of his old self. Again, he’s not wrong to do so; his time is his own, and he probably has more productive ways to spend it than reading the people who hate him. (It’s notable that when there was a more substantial controversy with Grantland’s Dr. V story, Simmons did address it quickly and personally. He didn’t do so perfectly, but he showed that he’s not completely ignoring serious criticism.)

It’s just interesting to see how the years, and his new role, have changed him. Those changes are far from all negative; it’s hard to imagine late-90s Simmons as a successful site editor or involved in serious documentaries. Simmons is more Sports Mogul than Sports Guy now, though, and whether that’s a good or bad thing probably depends on your tolerance for each of those versions of him.