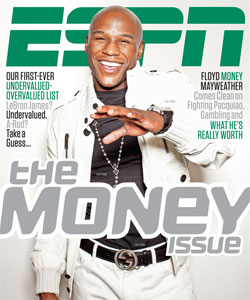 How far will 50 billion dollars get you in today’s world?

Well, for starters, you could construct an entire Olympic venue from scratch as they did in Sochi, Russia.

You could buy every NFL franchise with $13 billion left over to spend at your own leisure.  Maybe you would want to go and buy the entire NHL, whose 30 teams are worth just over $8 billion.

The 10 most expensive homes in the world would be nothing more than an impulse buy.

You could have owned Facebook at one point back in 2011.

How far would $50 billion get you?  You would be the 5th richest person in the entire world.  Take that, Larry Ellison!

50 billion dollars would also get you what was once a small regional cable television company in the town of Bristol, Connecticut.

ESPN has seen its empire grow exponentially in recent times.  Just a year and a half ago, ESPN’s approximated value was $40 billion.  The latest estimate according to research done by Wunderlich Securities and published in Forbes pegs ESPN’s value at 50.8 billion dollars.

ESPN’s secret weapon, as it has been for a number of years, is their continually increasing subscriber fees.  The network charges over $5 per subscriber per month, which is over four times more expensive than the next highest cable channel.  That’s a guaranteed source of revenue ESPN can count on before a ball is kicked, before a pass is thrown, before LeBron tweets and a major reason why their executives feel so secure in their place at the top of the world.

ESPN’s value is derived from the massive cash flow the company generates, which is expected to reach $4.5 billion this year, up 39% from five years ago. For comparisons sake, CBS CBS +0.09% Corp., the highest rated broadcast network, had operating income of $1.6 billion last year.

ESPN’s advantage over its network and cable brethren lies in the affiliate fee and ad revenue model that generates huge sums of cash. ESPN’s average monthly affiliate fee was $5.54 in 2013, according to SNL Kagan. The next highest national cable channel was TNT at $1.33, followed by Disney Channel at $1.15 and $1.13 for the NFL Network. ESPN2 is not far behind at $0.70 with ESPNews, ESPN Classic, ESPNU and ESPN Deportes each around $0.20 a month says SNL Kagan.

While battles over affiliate fees for regional sports networks rage in Houston and Los Angeles, ESPN quietly bumps its fees 5% or more year after year with must-see programming that cable distributors can’t possibly live without. ESPN has splashed billions on sports leagues and college conferences to get its hooks in the NFL, NBA, MLB, championship golf/tennis, college football/basketball and dozens of additional offerings. The result is an expected $6.3 billion from domestic affiliate fees this year that acts as a consistent, guaranteed revenue stream for Disney.

That revenue stream is the deciding factor in ESPN becoming the self-proclaimed worldwide leader in sports.  That revenue stream is why ESPN is worth more than the GDP of many nations around the globe.  It acts as a shield against any force that would ever think about coming in their way and why it would take a generation for FS1 or NBCSN or any other network to even begin to think about competing on a level playing field.

Fox Sports 1, viewed as the biggest long-term challenger to ESPN, charges $0.23 per subscriber per month, more than 24 times less than ESPN.

Those fees are why ESPN has been able to hold steady in a world of rising sports rights.  Even though the price of poker is going up in the television industry, ESPN has maintained their profit margins:

It has been expensive for ESPN to corner the market on sports programming, particularly with new entrants like Fox Sports 1 and the rebranded NBC Sports Network looking to make a splash on the national stage. ESPN’s sports rights costs jumped from $2.8 billion in 2009 to $4.1 billion last year. But ESPN has locked up many of its deals through 2020, and the only major sports TV packages coming up for bid are Big Ten football and the NBA, which ESPN is expected to back up the brinks truck to secure. Despite the jump in programming costs, ESPN’s profit margins stayed high by keeping the lid on production and other costs. Operating margins hovered around 40% in recent years and Wunderlich expects them to stay there for the next five years at least.

To average sports fans, these numbers seem mythical and otherworldly.  To think that a sports network could be one of the most valuable companies in the entire world is just staggering.  The stats showcasing ESPN’s power and influence are incomprehensible.  They’re too big to be real.  But they are real, and they’ll continue to keep growing and growing until John Skipper is our overlord and the entire western hemisphere is his fiefdom.