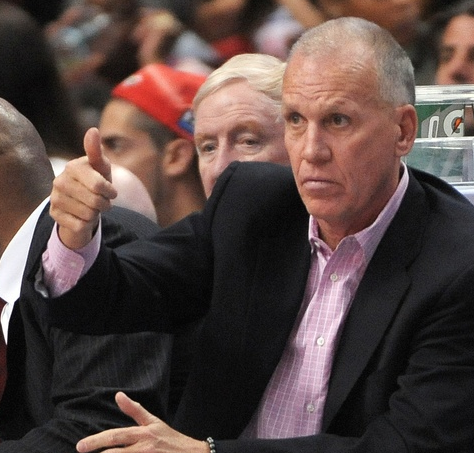 There is a little-known shuttle that exists in sports. We’ll call it the Doug Collins Express.

The Collins Express is set up for TV analysts who jump to the other side to become coaches and managers. Then once the inevitable occurs and they get fired, the dejected former coach gets shuttled back to a network, where he resumes his work critiquing other coaches as an analyst.

Steve Kerr and Mark Jackson actually passed each other on the Collins Express in recent weeks. Kerr left a terrific position as the lead NBA analyst for TNT, not to mention working the Final Four for the CBS-TNT coverage of the NCAA tournament, to become the new coach of the Golden State Warriors. He replaces Jackson, who took the Express back to ESPN where he promptly was placed back in his old seat with his old pals Mike Breen and Jeff Van Gundy.

Perhaps nobody in the business has taken the shuttle more than Collins. After getting fired by the Detroit Pistons in 1997, he went to work for NBC and TNT. After the Chicago Bulls dumped him in 1989, he did some analyst work for TNT. Then Michael Jordan lured him back to coach the Washington Wizards in 2001. When that gig ended in 2003, Collins jumped on the shuttle and went back to TNT.

Once again, Collins used his frequent traveler pass in 2010, leaving TNT to become the coach of the Philadelphia 76ers. By now, he has been given his own car on the shuttle, which he used again after leaving the 76ers last spring. However, instead of going to TNT this time, Collins went to ESPN.

An interesting dynamic is in play here. The lifestyle for a big-time sports TV analyst is quite nice. Big money, high profile, and nobody telling you suck because your team lost again.

But there’s also the other side: Nobody says you’re great after your team wins.

What these former players and coaches miss the most is the competition. Not only is there the thrill of victory, but there’s something to be said for the agony of defeat. The swings of emotions is the only thing they’ve known all their lives, dating back to when they put on their first gym shoes as kids.

It was that pull that eventually lured Kerr to the sidelines. It also could cost NBC its No. 1 hockey analyst.

Once again, Eddie Olczyk is being linked to coaching vacancies, this time at Carolina. He downplayed the speculation, but there appears to be no doubt that he will jump back in at some point.

Olczyk talks repeatedly of “unfinished business” stemming from his short stint as coach at Pittsburgh. The Penguins fired him in December 2005.

It is interesting to note that two notable lead analysts in their sports have resisted the urge to jump on the Collins Express: Jeff Van Gundy and Jon Gruden. Reports circulated over the weekend that Memphis Grizzles were interested in Van Gundy, but coach Dave Joerger decided to remain with the team.

It hardly is the first time Van Gundy’s name has been tossed in the rumor mill since he left the Houston Rockets sidelines in 2007. Since then, he has shined as ABC/ESPN’s lead analyst on the NBA.

Van Gundy had a standard line when asked if he would go back to coaching.

“My dad gave me good, sound, solid advice when I was coming out of college,” Van Gundy said. “He always told me, ‘Don’t worry about your next job. Just do the job you have as well as you can.’ That served me pretty well, and I’m trying to stick with that.”

Gruden, meanwhile, has enjoyed life in the ESPN’s Monday Night Football booth since being fired by Tampa Bay after the 2008 season. Most NFL observers didn’t expect him to last more than a year before returning back to coaching. Now he is about to enter his sixth season at ESPN.

At age 50, and given his burning intensity that he brings to the booth, it still seems to be just a matter of time before Gruden jumps back in again. In an interview with 95.7 The Game, Gruden’s former quarterback with Oakland, Rich Gannon, contends his former coach does have the itch.

“I think he’s gonna coach,” said Gannon, now an analyst for CBS Sports. “I think he wants to coach, but he’s in a great situation. He’s making a ton of money at ESPN, he’s watching his kids grow up, he’s getting to spend more time around the home which I think has been important to him and to Cindy. But trust me, I’ve had conversations with him. We seem to have them every off-season. He talks about he still has a desire to come back and coach and how competitive he is.”

Then again, another former Raiders coach, John Madden, walked away from coaching at the age of 42 and never returned. Let’s just say things worked out very well for Madden as a TV analyst.

Madden, though, seems to be the exception rather than the rule. Even though the lifestyle as an analyst is tremendous, the temptation to get back in the mix often is too great to resist.

It also works the other way. Once the coach gets fired, life as an analyst provides a perfect landing spot.

The Doug Collins Express operates 24/7 and travels to places near and far. All aboard!