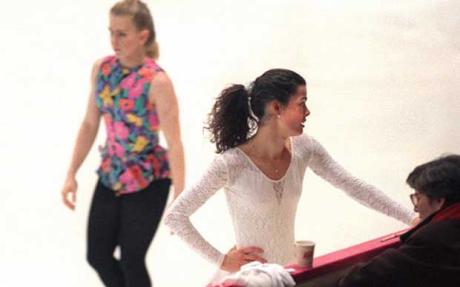 Length – 117 minutes with commercials (90 without)

Most Similar To – No Mas, Big Shot

Review – It's hard for me to pinpoint my lack of enthusiasm for The Price Of Gold before viewing or even after. Obviously, the incredible narrative of the 1994 attack on Nancy Kerrigan and subsequent investigation and Olympics is right in the wheelhouse for a sports documentary chronicling that now seemingly surreal sequence of events that unfolded that winter. To think in 1994 we had this shitshow, OJ Simpson's arrest, a World Cup, and an Olympics on top of the usual sporting calendar.

I remember following the Harding/Kerrigan saga as an 11 year old with quite a bit of interest. I couldn't look away and that says a lot given this came before my house had cable or the internet which transformed obsessing about any news event into low hanging fruit. I found myself a bit startled that despite not having spent really any time since 94 thinking about/rehashing the whole scandal, that I recalled a myriad of details that I would have thought had been wiped clean during my brain cell killing prime in college. The outfits they wore, the names of Tonya's associates involved in the scandal, the other skaters effected in that Olympics, and the outcome of the Olympic trials and Olympics themselves.

Thinking about this film and the incident itself, the whole thing was so damn cringe worthy and trashy that it's something that I wanted to rinse off my brain and never think about again.

But alas The Price of Gold is good. Very good in fact to the point where I can't really find much to harp on. Nanette Burstein has a great track record in the documentary space as I enjoyed her other foray in sports with the 1999 film, On The Ropes, a poor man's boxing version of Hoop Dreams.

The film moves at a very solid pace, never bogging down anywhere along the way. It's a cohesive and diverse mix of footage from their careers, news footage from '94, and recent interviews including Harding (Kerrigan did not participate although she and Harding will participate in NBC's documentary on the pair that will air during the Olympics).

The film would have obviously been aided a good deal by Kerrigan's participation but her father and husband (former agent) in addition to a good mix of media members that includes Connie Chung, Tony Kornheiser, and a lot of local media personalities in Kerrigan and Harding's home markets, give you a pretty good feel for "The Whack Heard Round The World."

While I was engrossed in the whole saga and interested in how Harding passed the media firestorm, legal issues, and Olympic team red tape to actually compete in the Olympics, my one complaint would be there isn't really much to draw out of this film. It's a straight retelling of the scandal, but a very good one at that.

Early on the film really focuses on Harding and you do feel some sympathy for what was clearly a very trying childhood on many fronts. There have been many films in the 30 for 30 series that takes you deep into the upbringing and mindsets of a lot of athletes who drifted away from the limelight for all the wrong reasons and early on this seems to be the path we're being taken down. Harding had it rough. REAL rough and perhaps I and we as a society overstated her involvement in the attack.

During the first 2/3 of the film, Harding wins you over as she seems mildly credible claiming ignorance to the attack and combined with insight into her upbringing. Maybe she is also a victim here? Coupled with the fact that HBO did a Real Sports segment on her trying to reinvent herself as a role model and motivational speaker to young kids, maybe this was going to be like Youngstown Boys in which we'd see a controversial figure turn a new leaf.

But all the goodwill Harding builds goes down the drain in the last third. Essentially, she breaks character in the last third of the film and the real Harding comes out and with a series of quotes disparaging Kerrigan, who has essentially taken the high road since by not speaking much about the attack and attempting to not let the incident define her.

Her biting comments will make you cringe, partially because they're awful but also because you know the hatred towards Kerrigan is deep beneath the surface where it will never go away. What person in their right mind given such a big platform to massage their image would be deranged enough to venomously double down on directing more spite towards Kerrigan? I get she dislikes Kerrigan for a variety of reasons, but if you're really going to convince the American public that a) you've changed and b) you were never directly involved, than you have to first convince us you never hated her with a passion. The fact that it's abundantly clear that she does even two decades later and even faults Kerrigan for being a princess and overplaying the victim role in the whole scandal, you leave The Price Of Gold with an even more negative image of Harding than before.

So while the film is quite good, do you really want to sign up for 90 minutes interesting storytelling with the main takeaway of, "Yup, Tonya Harding is a jilted crazy women who has found no peace since and is still full of shit."

And while that's somewhat of a subtle nudge to not watch, I'd imagine that this film will do great ratings. This 30 for 30 will have a huge female audience and I'd imagine younger viewers who might not recall this whole saga will also sink their teeth into it. For me, despite a solid ranking and a high opinion of the storytelling, the story itself is one I'd rather look away from. But then again, the whole story is so damn unique and unbelievable, maybe it's one of those things you don't want to look at but can't look away from.