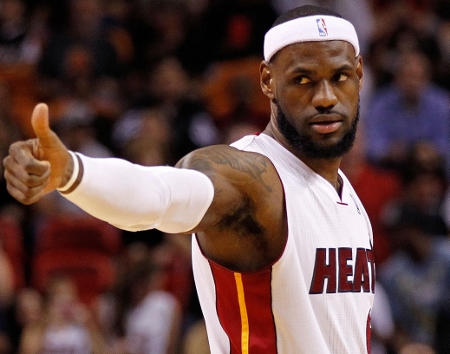 LeBron James is going to help produce a show he's developing with Starz – though it's not a reality show, it will be loosely based on his life, even though he may say otherwise.

According to the AP:

After LeBron James won his second NBA championship this year, he talked about the improbability of his journey — ascending to world fame despite growing up with challenge after challenge in the inner city.
Now James plans to explore that theme as part of "Survivor's Remorse," a new show he's developing with Starz. While he won't star in the half-hour sitcom, he'll be one of the executive producers of the show, which will explore the lives of two men from the streets who attain fame — one is an NBA star and one is not — and how they deal with friends and families in the wake of that success.

James is pairing up with Maverick Carver, his long time business partner, who insists the show is NOT about LeBron:

"It's definitely not an autobiographical series about my life or LeBron's life; it's fictional characters living in a fictional world," said Carter, before adding with a laugh: "LeBron is actually too famous, he would screw the show up if I tried to make a show about him."

With James helping to produce, it seems inevitable that parts of his life will creep into the show's plot.

In a phone interview with the AP, James noted, "I think the main thing for me is, first of all, making it out of a place where you're not supposed to. You're supposed to be a statistic and end up like the rest of the people in the inner city — (and) being one of the few to make it out and everyone looking at you to be the savior."

We get that his success story in going from Akron to the top fo the NBA is one that's worth telling, but what we don't understand is how this show will actually have LeBron's fingerprints on the final product. I don't see this show winning Emmys or, you know, even getting past the pilot phase but then again, what do I know? Maybe he's ultimately looking for a venue for The Decision Part II: Back to Cleveland.