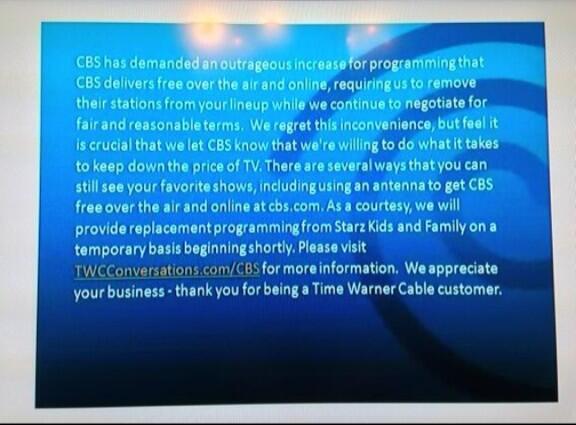 After several stops and starts, the CBS/Time Warner Cable dispute has now reached DEFCON 1. At 5 p.m. ET on Friday, Time Warner Cable pulled the signals of CBS-owned stations in Dallas, Los Angeles and New York as well as pulling its cable networks, FLIX, Showtime, Smithsonian Channel and The Movie Channel. CBS Sports Network is not affected by the TWC decision.

The issue is about money. CBS wants its per subscriber rate at $2 up from its current 80 cents. Time Warner is balking. And after extending the deadline several times, subscribers are stuck in the middle.

Sports fans already missed this weekend's PGA Tour WGC Bridgestone Invitational. In the coming weeks, sports programming that won't be seen on CBS stations in the aforementioned markets will be the PGA Championship, The Wyndham Championship, the Barclays, two national NFL preseason games and the U.S. Open.

In addition, local NFL preseason games on CBS stations in Boston, Dallas, New York and Pittsburgh could be blacked out for Time Warner subscribers.

As usual with these disputes, the two parties are involved in a silly war of words. Let's begin with CBS:

"Throughout this process, Time Warner Cable has conducted negotiations in a combative and non-productive spirit, indulging in pointless brinksmanship and distorted public positioning – such as the fictional and ridiculous 600% increase CBS supposedly demanded – while maintaining antiquated positions no longer held by any other programming distributor in the business. CBS, for its part, is eager to make an agreement in line with the kind it has struck with every other cable, satellite and telco provider, and has continually sought reasonable term extensions to get that job done."

"CBS Corporation, the owner of several TV networks and broadcast TV stations, has made outrageous demands for the right to continue delivering their programming to our customers. As a result, several CBS-owned channels have been removed from your lineup, while we continue to negotiate for fair and reasonable terms.

We deeply regret being forced into this position by CBS, but we’re prepared to stand by our customers and do what it takes to fight these unreasonable demands."

The CBS local stations that are affected across the country are as follows:

So with CBS off Time Warner for now, it's going to leave subsribers with an angry taste in their mouths until this thing is resolved. Right now, the end to this dispute is nowhere in sight. For now, the two sides aren't even talking.