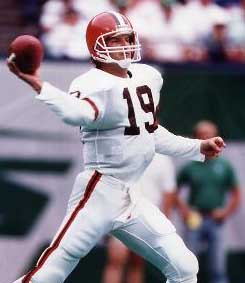 You never expect an NFL preseason telecast of all things to make news in the sports world, but thanks to Bernie Kosar, that is indeed the case.  Kosar has been calling Cleveland Browns preseason games for years, but drew nationwide attention for his unforgiving criticism of the St. Louis Rams during this year's preseason opener.  You can catch the video at the link, but these were some of the highlights.

"I see why Sam's been struggling watching how bad these receivers are, those were two outstanding throws the last two."

On if their parents were watching: "I would be embarrassed."

"I'm checking through the itinerary of guys and coaches to see who the receiver coach is to make sure I don't know who this guy is because he's not doing good either."

On another St. Louis drop: "God… he puts it in his pocket, what more do you want?"

On Kellen Clemens: "Bless me father for I have sinned, I have to watch him the whole 4th quarter."

In the days after that broadcast, as audio of Kosar's comments meandered their way through the NFL universe, Kosar began to draw his own criticism for going too far in the minds of many.  Peter King of Sports Illustrated had a go at Bernie on Twitter, bringing up the topic of Kosar's history with concussions and openly wondering if he was drunk.

EARTH CITY, Mo.–My question for Kosar after comments in Cle-StL preseason game: Were you drinking? Good guy. But waaay over the top here.

If Kosar's judgment has been impacted by concussions, then the Browns should be heavily criticized for putting him on a 3-hr telecast,

Don't go saying, "Bernie doesn't know what he's saying because of concussions." Doesn't work that way. If you're on air, you're responsible.

It didn't stop there.  Rams coach Jeff Fisher said he "lost a lot of respect" for Kosar over his brutally honest analysis and even Browns CEO Joe Banner said in a statement that the fan favorite was called into the principal's office and told to straighten up and fly right like he was football's version of Hawk Harrelson:

"We don't condone the personal and unprofessional approach that Bernie took with some of his comments during the broadcast Thursday night," Banner said in a statement released by the team. "We've spoken to Bernie, he understands that, and we would expect the situation is resolved moving forward. We've also reached out to the Rams organization and have shared those same sentiments."

This is a bit of an overreaction, isn't it?  We're always begging for TV analysts to speak their mind, be honest, and avoid using tired cliches.  Bernie Kosar is anything but a tired cliche.  In fact, he's far from a polished television personality… but not everyone has to be Jim Nantz, do they?

Kosar does have a history with concussions, there have been concerns about his health and mental state, but he says he's feeling better than he has in many years thanks to innovative treatments.  And it's not like Kosar had no idea what was happening in front of him, throughout the rest of the game he was mostly cogent.  If he was in the broadcast booth talking about double dribbles or icing the puck then I'd be worried.

The NFL is not tee ball where everybody gets to have an at bat, everyone wins, and the players celebrate with ice cream after the game.  This is professional football.  This is the highest level of athletic endeavor.  And if the players, families, coaches, writers, and franchises can't handle criticism that's a little too blunt for their liking then what does that say about the game?  What's Bernie Kosar supposed to say when the Rams receivers are dropping passes left and right?

"Kellen Clemens has never been a good NFL quarterback, but golly gee he's a swell guy and it's just so nice to see everyone out here having fun playing football!  What a great guy that Roger Goodell is too!"

Please.  And it's not like this telecast was being beamed back to St. Louis.  This was a local Browns telecast for Browns fans.  Was Kosar's commentary a little over the top for a preseason game?  Sure.  But was it really so offensive as to create diplomatic tension around the NFL?  Of course not.  But the NFL has become so controlled, so buttoned down, so managed, that anyone who steps out of the carefully manufactured appearance created by the league office has to be brought back in step.

So Bernie Kosar will likely learn his lesson and tone down his commentary next time.  And then he'll sound like every other football analyst working today.  Just the way the NFL likes it.