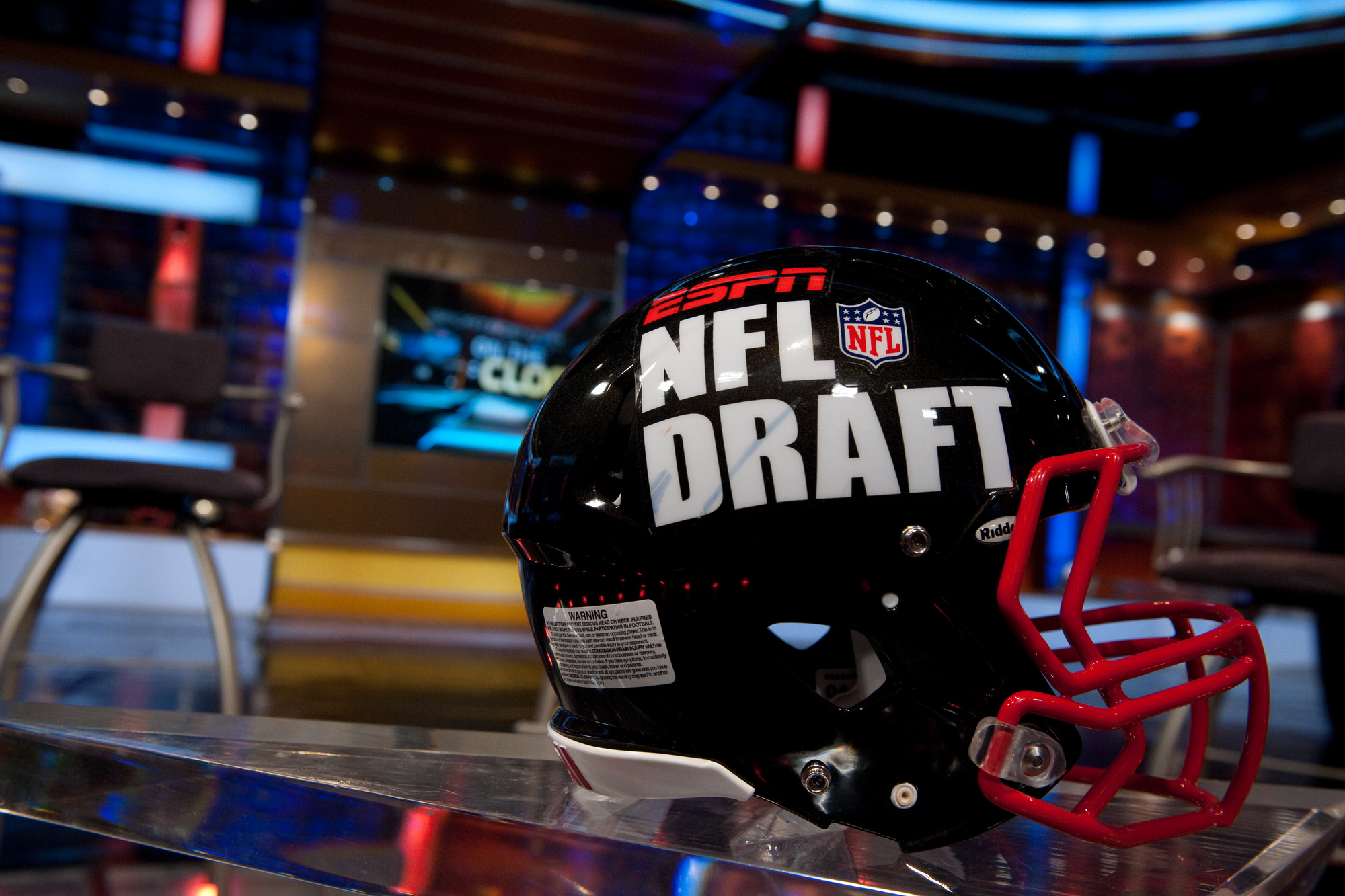 Last year we broke down the good, bad, and ugly from ESPN’s 1st round NFL Draft coverage.  Aside from the obvious baggage that comes with ESPN’s NFL coverage (more on that later) last year’s “less is more’ approach provided a significant upgrade over previous seasons.  Gone were analysts like Steve Young and Keyshawn Johnson talking just to hear themselves speak, while saying nothing of substance.  Going in to this year’s draft, with pledges to reduce the tipping of picks, it looked like ESPN was poised to once again improve on the previous year’s performance.  But, did they?  Let’s go through the highs and lows and sort out a final grade for ESPN’s Day 1 draft coverage.

-Once again, the reduced main set for ESPN’s 1st round coverage allowed Mel Kiper Jr. and Jon Gruden the time to shine.  Without having to elbow their way through fourteen other analysts, Kiper and Gruden had time to go to that deeper level of analysis on many of the prospects’ strengths, weaknesses, and fit for their new team.  Even interviews from Suzy Kolber and reports from team sites (with only Ed Werder making his contractually obligated appearance from Dallas) were cut down dramatically to the benefit of the Kiper/Gruden combo who continued to exude knowledge and chemistry.  The extra time was noticeable as Kiper was able to add insight on why Luke Kuechly might be the next Brian Urlacher or why ‘Dre Kirkpatrick might have trouble against the speedy receivers of the AFC North.  Yes, others like Mayock and Todd McShay have cut in on Kiper’s turf, and nobody can be 100% correct on every pick, but there’s no doubt Mel Kiper can still bring it strong throughout the NFL draft.  There’s a reason this was his 29th NFL Draft for the WWL.

-Overall, Jon Gruden seemed to have a much more consistent performance in this year’s first round. For a while, it looked like Gruden was once again going to start all of his analysis somewhere on the continuum between “I love this guy” and “I really like this guy”.  But then Gruden cited a lack of productivity from Memphis DT Dontari Poe against weaker competition.  Then, he called out North Carolina DE Quinton Coples’s lack of effort last season.  Those might be obvious points to those who follow the draft closely, but it was nice to hear Gruden avoid putting every draftee directly into the Hall of Fame.  It wasn’t a perfect performance, but it again showed the potential Gruden has to be the best NFL analyst in the business.

-The behind the scenes folks often don’t get a lot of credit when it comes to putting on an event like the NFL Draft.  And certainly an area where ESPN has excelled for many years has been their highlight packages on each of the 1st round prospects.  The best example was showing a montage of dropped passes that plagued Ryan Tannehill at Texas A&M last season.  The highlight packages make the analysis of the likes of Kiper and Gruden look even better.

-Yes, overall Jon Gruden performed very well, but there were a couple of complaints as usual.  Gruden still has a way to go from being perceived as someone who is overly positive on a universal basis.  More disappointing though was Gruden’s brief analysis on the first two players selected, QBs Andrew Luck and Robert Griffin III.  Last year, Gruden unleashed an amazingly thorough scouting report on QB Cam Newton detailing exactly the adjustments Newton would have to make in the NFL.  This year, Gruden’s first scouting report was saved for USC T Matt Kalil, not exactly one of the glamour prospects.  Perhaps ESPN felt draft viewers would be fatigued from Gruden’s QB Camp special, but this was one time where it would have been nice to have more said about the top two picks.

-Speaking of the top two picks, ESPN missed a major opportunity to feature their newest NFL analyst, former Colts GM Bill Pollian.  Who else would have the unique perspective on the Colts drafting Andrew Luck than the man who drafted Peyton Manning to the same franchise?  Yes Pollian didn’t exactly leave the Colts in the best shape, but surely his analysis could have been useful to compare Luck to the QB he is replacing.  Seeing Todd McShay show up to debate Mel Kiper Jr. on Ryan Tannehill once again also would have made for some fireworks.

-Yes, it was nice to have limited commercials in the first hour of ESPN’s coverage, but not at the extent of Bud Light becoming the star of the show.  Did you notice the interviews coming from the Bud Light Blue Room that was actually just the edge of the stage, not a physically enclosed space?  Or how about the completely unnecessary Bud Light Fan Forum?  Don’t forget about the Bud Light Team Reports as well.   All I know is, by the end of the night, I was ready to start drinking something a lot stronger than a Bud Light.

-ESPN and the NFL made a big deal in the last week about not tipping picks before they were announced.  For a while, ESPN seemed like they were going to honor this pledge by not showing players on the phone in the green room.  Then, mid-way through Round 1, pesky “Insider Alerts” began popping up on screen.  The first alerts didn’t explicitly tip picks, but told you what exactly was going to happen, such as “Rams zeroing in on Michael Brockers” from Adam Schefter.  But then, Schefter gave away both of the Patriots picks as they traded up in the first round.  Then to cap things off, Chris Mortensen announced the Bucs were drafting Doug Martin before the pick was made official!  So much for not tipping picks, eh?

–Chris Berman continued to distinguish himself as the 10,000 pound anchor that drags down ESPN’s draft coverage.  Doesn’t it feel like Berman is much older than 56, because his act seems as if it’s been going on much, much longer.  Hey, give Dickie V credit, at least he’s on Twitter, he’s hip with it!  The evening started with Berman’s softball interview with NFL commish Roger Goodell that was only missing some lounge chairs and a couple fruity umbrella drinks to make the two more comfortable.  Then things only got worse as Berman continued with his bumbling and stumbling.  Tony Romo as good as he’s ever been?  Ryan Tannehill on the “orange carpet” going to the Dolphins? Talking up the Bills defense as if they were going to be the ’85 Bears?  Teasing a trade that’s already happened as there’s a cut to commercial?  At least Berman was able to rescue the Jets time on the clock by leading a Tim Tebow discussion Skip Bayless would be proud to see.  The low point of the entire draft night coverage might have been when Berman uttered “I think it’s going to work, we love the kid.”  about Tebow in New York.  Although saying Brandon Weeden was literally going to play in Lake Erie for the Browns was a close second.  Oh and there was also CHRIS BERMAN YELLING AS THE DRAFT WAS ABOUT TO START!!  Please ESPN, enough already.

-More than any other year, the draft coverage from ESPN seemed to be behind events as they unfolded in real time.  Many viewers on Twitter noted the ESPN feed seemed to be delayed compared to the NFL Network broadcast.  But, more than that, the speed that picks and trades were made seemed to catch ESPN, and especially Berman, off guard.  Often times a new logo would show up on the bottom of the screen signaling a trade, but the news would have to wait until the current topic of discussion was wrapped up by the main set.  Viewers would hear reaction from the crowd or see events on the screen, but were left waiting to actually hear about the latest developments from Berman and crew.  Sometimes, Twitter maniacs like Schefter or SI’s Peter King were multiple picks ahead of the TV coverage and way ahead with trade details.  The constant flurry of activity left Berman stumbling even more than normal as he was wondering how the 1st round could have passed so quickly by the end of the night.  In fact, the delay between real-time on Twitter and the ESPN broadcast almost made being active on social media detrimental to the TV experience of watching the draft.

Last year we gave ESPN a solid B for the improvements made over previous years, specifically the “less is more” approach that allowed Kiper and Gruden to show their worth as draft analysts.  However, this year’s coverage seemed to have taken a slight step back by failing to continue to evolve forward.  At times there seemed to be a total lack of flow in ESPN’s broadcast, as if they were constantly trying to play catch up to the night’s events.  The coverage wasn’t a complete failure as it has been in the past, but ESPN’s lack of progress means their grade has to drop compared to last year.  Their reward is a healthy C+.

Click Here for The Good, Bad, and Ugly of NFL Network’s Draft Coverage.